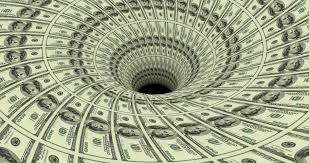 Our banking system is currently very fragile.   It would not take much to cause it to collapse.   Any
of several events could set off this reaction. One of the biggest events is going to happen soon, in
fact it could happen this year and it will be absolutely devastating to the banking industry.

The rapture of the church will bring about one of the biggest changes on earth since Noah’s flood.
When over 1.5 billion people are instantly removed from society, the impact will be overwhelming.
It will affect the entire world as Christians from all over the world will suddenly be taken away.
Let’s look at some of the impacting issues.

Most people today the world over are living on borrowed money.  More so in the industrialized
world, but even in developing countries.  This has become our way of life, “fly now and pay later”.
Everyone owes money on their house, car, and credit cards and just pays the bank a certain amount
every month in order to keep using the goods.  When these people are suddenly removed, who will
make their payments?  No one.   So the banks will start foreclosure on their houses, but they will
have so many houses to foreclose on that they won’t know what to do with them all.   When you
suddenly have a huge influx of homes on the market, that will drive down the price substantially.
This means that the banks will have to take huge losses when they sell the property.   And they
won’t be able to collect on the money still due on the mortgage after the foreclosure sale either.

The same thing will happen with cars.   Most new cars are financed.  When the payments stop, the
cars will be repossessed and sold.   But for how much?  With a huge influx of used cars for sale that
will force the price way down and the banks will take huge losses.    And with credit cards, they
won’t even have anything to reposess or sell, that will be a full value loss.  This could take down
many financial institutions and cause them to go bankrupt.

Let’s look at another aspect.  What happens when you suddenly remove 1.5 billion consumers?
You produce a surplus of all goods and services that those consumers used to use.  This creates a
glut in the system which creates huge price reductions which begins to work it’s way back to the
producers resulting in more unemployment and price cuts.  And this results in more defaults on
loans and higher unemployment as factories and producers go out of business.

Those 1.5 billion people will also not be paying any more taxes.  No more property taxes, sales tax,
income tax, or any other taxes.   Governments, cities, and states all depend heavily on taxes as
their source of income.   A reduction of taxes means a reduction in the maintenance and services
provided which means more lay off’s and higher taxes for those that remain.

And what about all the jobs those people did, who will replace them?   Of course there will be many
jobs available, but there will be many jobs available with no one qualified to fill them.   How do you
replace an electrician or a plumber?  It will take several years.  As a result, this could greatly
hamper any new construction and maintenance projects for quite some time.   And what about
essential services like doctors, dentists, nurses, and so on, there will be shortages all over the
world, so those people won’t even be able to be brought in from other countries. Those that remain
in the work force will be stretched to the limit and the rest will just have to wait.

When all of this happens it will affect every person on the entire earth.  Everyone will lose, some
more than others.  Most people will be so devastated and in such despair that they won’t even have
time to think of where all these people went and they won’t care either.  They will be totally focused
on their own life and what they have left of their savings, investments, and assets and what they are
going to do next.  Of course the governments will have an “official story” but it won’t be the real
story.

These are just a few examples of how the rapture will impact the world.  It’s not even conceivable
as to how much will be affected until we are living in it, but one thing is certain, the effects will be
absolutely devastating.  The re-adjustment period will create huge problems in all markets.  The
economic impact will be huge and beyond what we could imagine as the domino effect kicks in.

One thing we know FOR SURE is that the Rapture WILL HAPPEN.  We just don’t know when.
And the way things are going it could happen very soon.  So it’s best to get prepared by
Getting Right With God TODAY.  You can do that HERE.