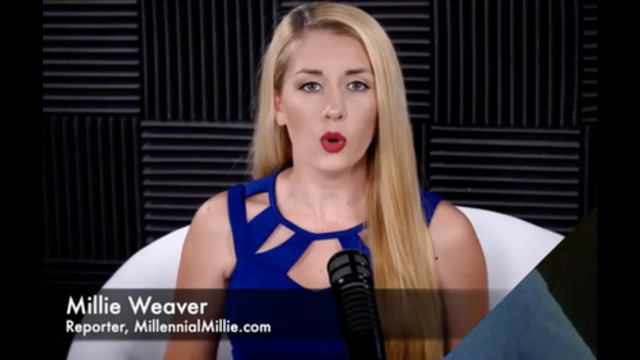 A scheme hatched in the mind of conservative personality Millie Weaver the very moment law enforcement arrived at her Ohio home with an arrest warrant. Weaver, a self-proclaimed journalist and former correspondent of Alex Jones’ Infowars, was on the verge of releasing a documentary called Shadow Gate, an hour-long poorly sourced diatribe filled with spurious allegations and flimsy evidence. The video alleges that federal contractors are using advanced data collection techniques to orchestrate a coup against Donald Trump.

On the morning of August 14, law enforcement officers from the Portage County Sheriff’s Department arrested Weaver, 29, her husband Charles, and a one Gavon Wince, whose connection to the Weavers remains a mystery. Weaver live-streamed her arrest to her large social media following, and tacitly suggested that the deep state engineered the arrest to prevent the release of her documentary.

Nothing could have been farther from the truth. Weaver was charged with robbery, a second-degree felony, and domestic violence, both charges stemming from an altercation in which she allegedly stole her mother’s inexpensive ($50) cellular phone and then beat her silly.

Interestingly, once detained Weaver’s first telephone call was not to an attorney; rather, she called longtime friend Ezra Levent, a Canadian media personality, conservative political activist, and founder and owner of Rebel News. Within hours of Weaver’s arrest, Ezra had established a GoFundMe account on Weaver’s behalf, inducing potential donors to believe that Weaver, who claims to earn a six-figure income, needed donations to pay for a legal defense fund. The GoFundMe page also implied a non-existent connection between the arrest and the release of her documentary.

A Portage County Sheriff’s Deputy speaking under condition of anonymity claimed to have heard Weaver mentioning GoFundMe during her and Levent’s three-minute conversation.

“I was not privy to what the other party was saying, but I clearly overheard Millicent Weaver mention GoFundMe and Shadow Gate arrest in the same sentence. It seemed obvious that she either misrepresented the reason for her arrest or was conspiring with this other person for financial gain. Seemed downright dirty to me,” the officer said.

On Monday Weaver was arraigned and released on bond. When the true charges became officially known, her social media feeds were a buzz with mixed sentiment, and a conclave of Weaver’s followers demanded she refund GoFundMe donations, but an unrepentant Weaver stated emphatically that she intends to keep the money, almost $180,000.

As of this writing, Weaver continues to insist her arrest was unconstitutional and linked to charges against the “criminal elite” highlighted in her documentary.

Weaver, a failed model, got her start in “journalism” approximately eight years ago, when she espoused conservative ideology under the moniker “Millennial Millie.” Shortly thereafter she was recruited by Alex Jones’ Infowars as a freelance reporter.  Infowars producer Stephen Slidell said in 2016 that Jones hired Weaver because “thirsty 45+ conservative men will believe anything they hear from an attractive blonde with big tits.”