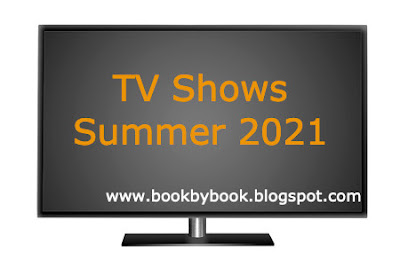 Summer used to be a dead time for TV, with nothing on but reruns while we waited for the new fall TV season. Things have changed, though, and with all the competing streaming services, cable channels, and even the stodgy old networks bringing out new seasons and new shows at all times of the year, there is plenty to watch in the dog days of summer. My husband and I are enjoying a bunch of new seasons from some old favorite TV series, some new-to-us shows, and are looking forward to trying some new shows later this summer, too. (Links below go to my reviews–including trailers–where available.)

The good news? Our all-time favorite show is back for some extra end-of-season episodes. The bad news? These will be the last episodes ever. Good Girls, a hilarious, moving, thrilling series on NBC about three moms who get pulled into a life of crime, is back for an extra four episodes, but the powers that be have decided that this fourth season will be its last. This show is so well-done, starring Christina Hendricks, Retta, and Mae Whitman as the title moms and Manny Montana as the hot but dangerous crime boss. We just watched the second-to-last episode last night and can’t even begin to imagine how they’ll wrap it up when the last episode airs on July 8.

Another favorite of ours is back for its third season. In the Dark on CW (earlier seasons on Netflix) is another story of regular people getting pulled into hard crime, but in this case, it’s a blind woman named Murphy, her best friend, Jess, who’s a veterinarian, and their co-worker, Felix. In the first episode, Murphy “witnesses” the murder of a good friend, a teen boy killed by drug dealers. Even though Murphy is blind, she knows enough to help the police and is determined to help bring her friend’s killers to justice. But, this is a twisty tale, and between criminals, good cops, crooked cops, and deals gone wrong, the three young people, who all work at Murphy’s parents’ guide dog charity, soon find themselves into the criminal world way too deep. It’s an excellent show, a dark thriller but with a great sense of humor, and we are excited to hear it will be back for a fourth season in 2022.

I finally finished reading the last book in the Mr. Mercedes trilogy by Stephen King (including Mr. Mercedes, Finders Keepers, and End of Watch), so now we can finish watching seasons two and three of the Mr. Mercedes TV show on Peacock. Luckily, someone warned me that the TV show swaps things around, with season two covering book three and season three tackling book two, so I knew to finish the whole trilogy before going past season one. I have made the mistake of starting season two of the show immediately after finishing End of Watch, so I am a little annoyed by all the changes they made: killing off beloved characters, adding entirely new characters, shifting the plot, and even changing the seasonal setting. But, all that said, it is still an excellent TV series and very well-done, a detective/thriller show with some paranormal elements. If Stephen King can accept all these changes to his books, I guess I can, too.

Another show we enjoy based on a book series is Bosch on Amazon Prime, adapted from the huge series of books by Michael Connelly about Detective Harry Bosch. We both love Connelly’s novels and the Bosch character, and the TV series is an outstanding adaptation. Each season is generally adapted from a single novel, and the cast is excellent, headed up by Tutus Welliver as Bosch and Jamie Hector as his partner, Jerry Edgar. Lance Reddick co-stars as the Chief of Police. This is a classic police procedural, set in L.A., but of the highest quality. We were very sorry to hear this seventh season is its last, but word is that a spin-off is coming … hopefully based on Connelly’s newest character, Detective Rene Ballard.

For All Mankind is an entirely different kind of show on Apple TV. No crime or thrillers here. It is an alternate history of the U.S. space program, in a world where the Soviets first beat us to the moon in 1969 and then quickly sent the first woman to the moon, completely changing the U.S.’s own progression in the space race. In this world, which includes some real-life members of NASA and historical news excerpts, as well as some fictional characters, the race to the moon is accelerated by the Soviet’s accomplishments, women become an integral part of the space program early on, and a base is established on the moon to keep the Soviets (who have their own base) from taking over. We are now watching season two, which takes place in the 80′s, after the U.S. moon base has grown tremendously and lithium has been discovered on the moon. Can you imagine the implications? The show is outstanding, suspenseful and thoughtful, with excellent cast and writing. It’s a fascinating look at an alternate history and science progression but also a drama about the lives of the astronauts, their families, and the other employees of NASA. Highly recommended.

Also on Apple TV, another favorite of ours has also returned for a second season: Home Before Dark (not to be confused with In the Dark, above). This is a typical mystery/crime show … except that the detective is a nine-year-old girl! Hilde’s family recently moved from Brooklyn to a tiny Northwest coastal town where her dad grew up. Hilde wants to be a journalist, just like her father, and already writes and publishes her own local paper. In season one, she somehow managed to solve a decades-old cold case involving a missing child who was one of her dad’s best friends. In season two, she is investigating an environmental mystery. This is one of our favorite shows–it is smart and funny and totally engrossing, and we can’t wait for each new episode to be released on Fridays.

To lighten things up from all these mysteries and thrillers, we are enjoying the newly released season five of The Good Fight, a spin-off of The Good Wife. Starring Christine Baranski and Audra McDonald, the show features a Chicago law firm that can’t decide if it wants to be an all-Black firm or an all-woman firm (that’s a big source of tension in this latest season). It is ripped-from-the-headlines , with this season set right now, past the worst of the pandemic and in the current political climate. There are legal cases in every episode and political references, but also a great sense of humor. Like I said, it;s a fun counter to some of the darker thrillers we watch.

There are several new shows slotted to start in August that we plan to try.

A reboot of Fantasy Island is set to premier on Fox on August 10. I heard about this show because I listen to a podcast, Happier in Hollywood, hosted by the two TV writers and show runners involved in the project, Liz Craft and Sarah Fain. After listening to how much fun they had filming the show in Puerto Rico this spring, I decided to give it a try. The trailer looks enticing:

And there’s a new Sandra Oh TV series, The Chair, coming to Netflix on August 20! We loved her in Grey’s Anatomy and on Killing Eve. Here, she stars as the Chair of a university English department. The trailer doesn’t tell you much, though it hints at a good sense of humor … and it’s Sandra Oh! Definitely worth trying:

Coming to Hulu on August 31 is a new series, Only Murders in the Building, about three neighbors who investigate a murder in their apartment building. Get this: the three lead actors are Steve Martin (who created the show), Selena Gomez, and Martin Short! And I caught a glimpse of Nathan Lane in the trailer, too. Talk about comedy royalty! I can’t wait to try this one:

How about you? What are you watching this summer? Any new shows coming that you want to see? We’re always open to new suggestions!