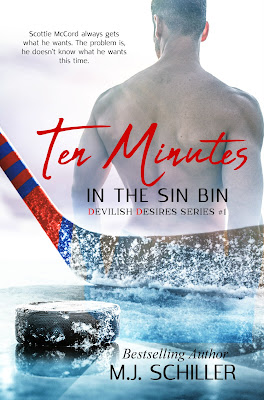 I’m delighted to welcome M.J. Schiller to SlingWords today. She’s here to tell you about her compelling new romance, Ten Minutes in the Sin Bin.

For those of you who may know nothing about ice hockey, the sin bin is the penalty box.
Ten Minutes in the Sin Bin is Book 1 of a new series, Devilish Desires.

Scott McCord always got what he wanted. The trouble is, he doesn’t know what that is this time.

Scottie McCord is an NHL forward who doesn’t do a lot of looking back. But when Elise Scofield moves to the same West Coast city he plays for, he can’t help but reminisce.

I’m psyched Elise will be close by. She’s a lot of fun, and I need to get the 411 on her breakup with Hunter. I warned him when they first started dating that I would be none too happy with him if he hurt Elise. Not that I have a thing for her. Sure, that kiss when we were kids was the hottest moment of my life, but that’s just because it was a first. She’s like a sister to me now.

Elise Scofield is making a fresh start. A move to sunny California may be just what she needs, especially with Scott there.

Scottie and I have always been close, “two straws in a soda” is my mom’s weird way of putting it. We’ve gotten over that awkwardness of having kissed a long time ago, and fallen into an easy brother-and-sister-type of relationship. He’s the best. And who knows? He might even introduce me to an eligible hockey player or two.

But when Scott’s teammate says he’d like to spend TEN MINUTES IN THE SIN BIN with Elise, Scott becomes hot enough to melt the ice that he plays on. Then when Scott finds out his opposite winger is only trying to win a bet by bedding Elise, he wants to check his teammate into oblivion. But why are his feelings always so amped up around Elise?

The only problem is…this time around he’s not sure what it is he wants.

Bet You Want to Read an Excerpt 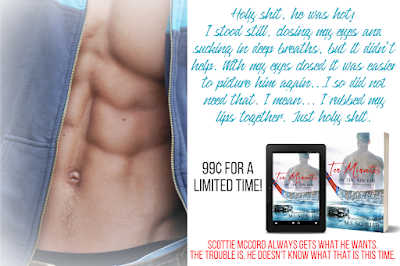 I put the puck on the ice between us and hoped to catch her gaze, but she was focused. Her lips were in motion; she was strategizing. I chortled. “You’re so cute when you think you have a chance of winning.”

I raised my brows. Ooh, touchy.

In her excitement, though, she let the puck get away from her. Rookie mistake. She had to go deep into the corner to regain control, which gave me the opportunity to get in position in front of the net. Our eyes met. She knew it was over. If she took a shot, I wouldn’t let it go in, and I’d take it to the other end before she’d finished her follow-through.
She skated warily to the blue line, giving herself time to think, then poured it on, weaving across the ice, going backhand to forehand and back, honed in on me, hoping I’d commit one way or another. I opened my legs to give her a glimpse of the five-hole and she bought it, taking her shot. I didn’t have goalie’s pillows to seal it off, but I still managed to block it. Elise lost an edge and went sliding into the boards with a loud thud. She moaned, lying face down on the ice.

“Elise!” Forgetting everything else I sprinted to her side. “Are you okay?”

“Oh.” She lifted her head, grimacing. “What happened?” she said shakily. She got on all fours.

I tried to assess the level of damage. “Where does it hurt?”

“Umm…” She lunged to her right, hooking the puck with the blade of her stick and swung it into the net. “Yes!”

It took me a second to realize I’d been had. “Wait. That didn’t count.”

“I didn’t hear any whistle, so the play was not dead. I won.” She rolled onto her butt and extended her arm for me to help her up.

I jerked her to her feet and again her closeness made my throat tighten. “I should have dumped you on your butt.”

She removed her bucket, shaking free all of that gorgeous hair and grinning at me. “Yes. You should have.” She tapped my lips with her finger. “But you didn’t.”

I really, really wanted to kiss her. Like, knock her onto the ice and rip off her pads. And rip off my pads. And touch her smooth skin. And feel her lips under mine. And—

She had glided about halfway across the ice and had pivoted, looking at me with a little cocky lift of her chin. I let out a scream that was partially a deep-throated yowl, partially an unidentifiable shout and rushed her. She shrieked and jumped then tried to race away from me, but I caught her at the boards where she had been hindered by opening the gate, trapping her in my arms, my mouth at her ear. 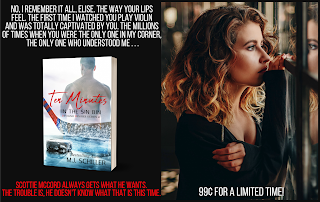 She enjoys writing novels whose characters include rock stars, desert princes, teachers, futuristic Knights, construction workers, cops, and a wide variety of others.
In her mind everybody has a romance. She is the mother of a twenty-seven-year-old and three twenty-five-year-olds. That’s right, triplets! So having recently taught four children to drive, she likes to escape from life on occasion by pretending to be a rock star at karaoke. However…you won’t be seeing her name on any record labels soon.
Find M.J. Online (Not That She’s Hiding)
Website: https://mjschillerauthor.blogspot.com/

Doesn’t Ten Minutes in the Sin Bin sound utterly delightful? If you agree, then you’ll want to get your own copy. This book publishes tomorow. Buy it today so you can start reading in the morning!
You’ll find this book, available in ebook and paperback editions, at the following booksellers: