Something is Terribly Wrong in Quebec aka COVID Hell

The Canadian province of Quebec boasts one of the highest vaccination rates in the world. It also holds another title: Harshest lockdowns and most oppressive sanitary measures in the world. Here’s a look at life in Quebec right now. 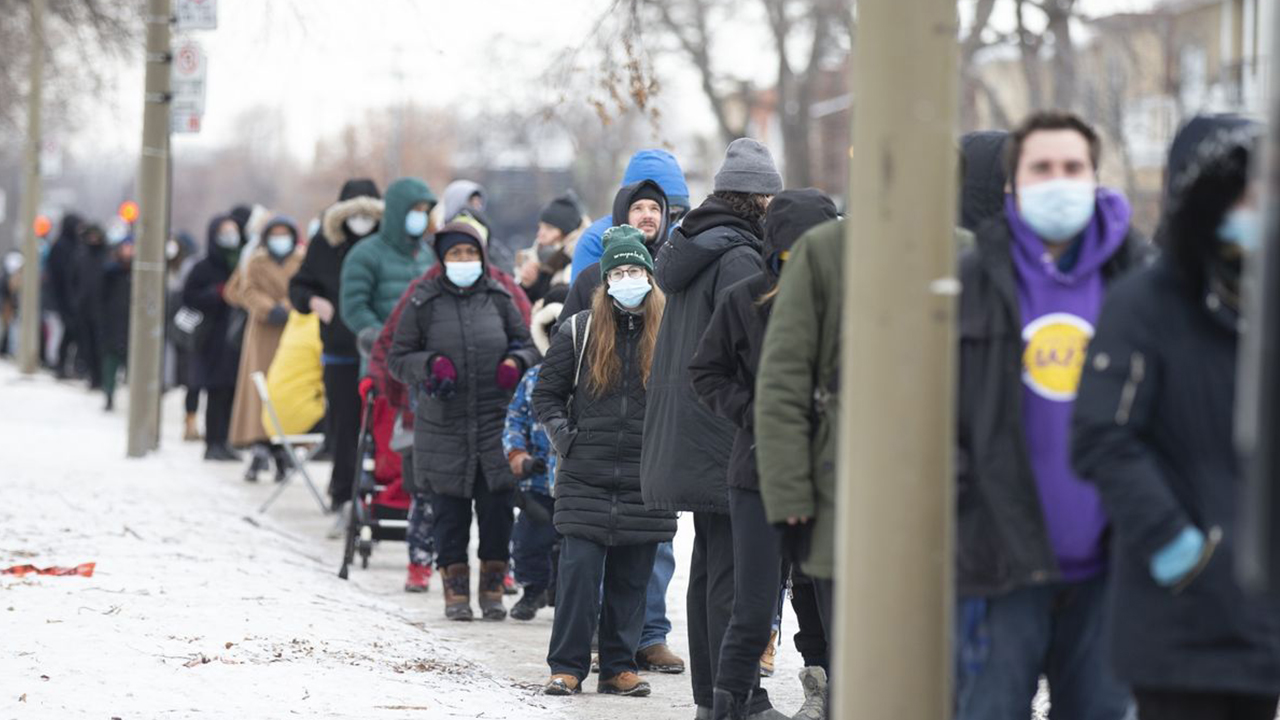 My family immigrated to Canada over 40 years ago to escape the Lebanese civil war. This vast and cold country turned out to be a wonderful place of welcome and opportunity which allowed everyone to flourish and prosper. I was born and raised in Canada and I’ve always been proud and appreciative of this fact. In fact, every time I hear the national anthem, I get slight chills when I hear this one specific line:

But then COVID hit. And it did not take long before Canada lost some of its glory. And most of its freedom. This is especially true in one specific province: Quebec.

While most of the world had to deal with harsh COVID restrictions, Quebec consistently lead the world in the extreme severity of its measures. Despite an abundantly funded universal healthcare system that is “the envy of the world”, Quebec spent 13 out of the last 22 months in a strict lockdown where most businesses were closed and most social interactions banned.

In 2022, although 90% of the population is vaccinated, things are only getting worse and dangerous precedents are being set. Here’s a look at life in Quebec right now.

When COVID hit Quebec in 2020, it responded (like most of the world) with a massive and total lockdown. Schools and businesses were closed for two weeks to “flatten the curve”. These weeks turned into months. During that time, a slew of measures was imposed on the public by a government that suspended democracy and began ruling by decree. This is is still true today.

Rule by decree is a style of governance allowing quick, unchallenged promulgation of law by a single person or group, and is used primarily by dictators, absolute monarchs and military leaders.

In January 2021, the entire population of Quebec was subjected to a curfew that lasted FIVE months. During that time, people who were caught outside of their homes after 8 PM were stopped by police and given fines. As days got longer, people had to live with the absurdity of hiding inside their homes while the sun was still up.

Meanwhile, vaccines were made available. People were told that these shots would lead to freedom and normality. They were told that a 70% vaccination rate would be enough to build solid herd immunity in the province. Quebecers, who were clearly sick and tired of the insane measures they had to deal with, rolled up their sleeves. The province quickly neared a 90% vaccination rate – one of the highest in the world.

So did Quebec reap the rewards of its compliance? No. Delta arrived. And, despite the fact that 9 out of 10 people were vaccinated, the government imposed a vaccine passport in most “non-essential public places” such as bars, restaurants, gyms, and much more. The introduction of this measure was preceded by a massive media campaign where nearly all “news” outlets and journalists backed the measure. Those who were opposed to it were silenced and censored.

“The vaccine passport is freedom”. One of the many Orwellian news headlines that preceded the imposition of the passport.

So did the passport finally lead Quebec to freedom? No. Only a few months after this controversial measure was forced on society, Quebec was subjected to another harsh lockdown. Everything closed again. Why? Omicron.

Furthermore, on December 31th 2021, Quebec became the only place in the world to impose another curfew on the entire population. When asked for science proving that curfews have an actual impact on the pandemic, the government simply replied that it had no proof. A dangerous precedent.

On New Year’s Eve, at 6:45 PM, while people were attempting to forget the fact that they lived in an Orwellian nightmare, every single phone in the province emitted a loud terrifying noise. It was an “emergency alert” sent out by the government stating that “it is forbidden to be outside your home”. 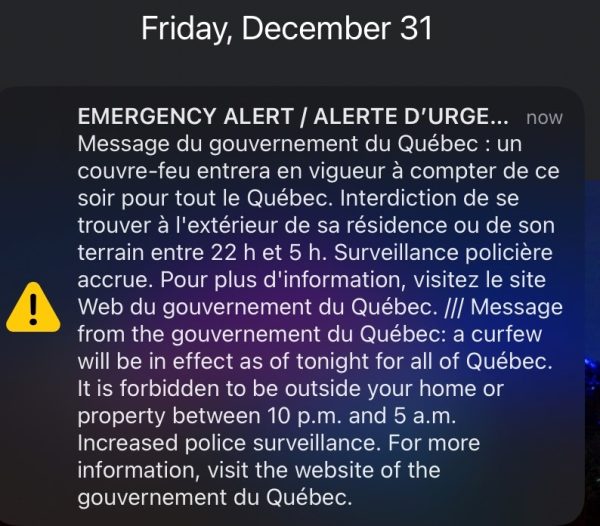 The “emergency alert” sent out by the government of Quebec on New Year’s Eve.

As if that wasn’t enough, that message also popped up on TV screens with the same horrific noise. It was, easily, the most dystopian moment in Quebec history. To make things worse, the alert actually caused TV service to be interrupted for a few hours due to a “bug”. I’m not making this up. In short, on New Year’s Eve, people were stuck at home and an Orwellian government alert caused TVs to stop working.

Needless to say, 2022 started poorly in Quebec. Despite the fact that studies showed that Omicron is much weaker than previous variants, Quebec doubled down on the restrictions. Here are some of the measures that are currently in effect in Quebec. Right now.

Faced with growing criticism, the government engaged in the most cynical strategy possible: Scapegoating. And thus, all of the blame was placed on the unvaccinated for taking up too many hospital beds.

And, as usual, that campaign was backed by some of the worst attempts of propaganda I’ve ever witnessed. In the following example, a Quebec TV show uses children to push full-on vaccine mandates.

In the video, one girl says that the government should “punish” the unvaccinated by gradually ruining their lives. And that is exactly what is happening now. Indeed, the Quebec government is currently going down a highly dangerous road: The imposition of punitive measures.

From Sanitary Measures to Punitive Measures