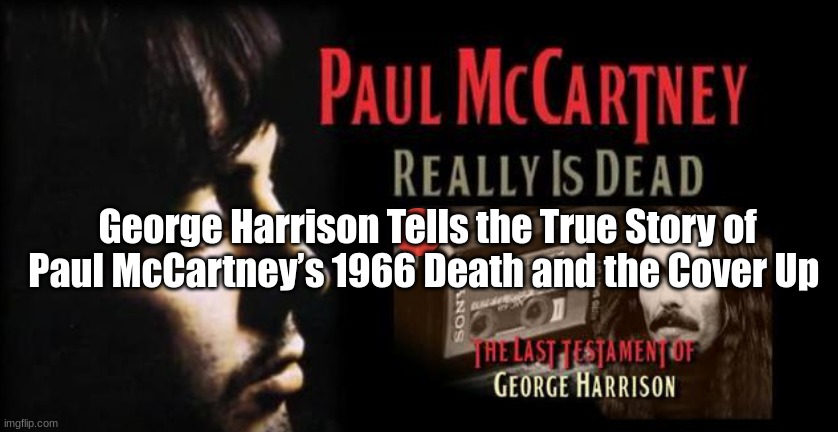 I had never heard George’s take on Paul’s fake death and he really exposes some heavy truth in this rare interview! These cover ups have been happening for decades and for someone involved in one to speak up is a true gem of history!

There seemed to be involvement afterwards by the MI5 and the Queen. Nobody may ever know all the truth. Why? Money?

To keep up the illusion? The rabbit hole goes deep on this one. Did they also kill John Lennon to keep him from speaking?

In the summer of 2005, a package arrived at the Hollywood offices of Highway 61 Entertainment from London with no return address. Inside were two mini-cassette audio tapes dated December 30, 1999 and labeled “The Last Testament of George Harrison”.

A voice eerily similar to Harrison’s tells a shocking story:

Paul McCartney was killed in a car crash in November of 1966 and replaced with a double! British intelligence, MI5, had forced the Beatles to cover up McCartney’s death to prevent mass suicides of Beatle fans. However, the remaining Beatles tried to signal fans with clues on album covers and in songs.

Until now, the “Paul is Dead” mystery that exploded worldwide in 1969 was considered a hoax. However, in this film, the mysterious voice on the tapes reveals a secret Beatles history, chronicling McCartney’s fatal accident, the cover up, dozens of unknown clues, and a dangerous cat and mouse game with “Maxwell,” the Beatles’ MI5 handler, as John Lennon became increasingly reckless with the secret.