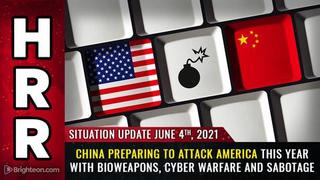 (Natural News) Over the last 48 hours, I’ve received a flood of intel from sources, both private and public, indicating that communist China is moving up the timetable of a long-planned attack on the United States of America. In reality, the biological warfare phase of the attack is already under way, having begun in 2019 with the deliberate release of the SARS-CoV-2 coronavirus, followed by direct interference in rigging the 2020 election and installing CCP puppet Joe Biden as a temporary occupant of the White House.

Now, due to the rapid emergence of evidence showing Fauci conspired with the CCP to fund gain-of-function development and build a biological weapon that attacks human ACE2 receptor sites, China is accelerating its own timetable to take down the USA before such investigations can conclusively place the blame for covid on China’s communist regime.

According to my sources, the planned attack on America will consist of:

The stealth drone that was recently spotted over Tucson, AZ, monitoring the Davis-Monthan AFB, is part of this effort. There are hundreds more stealth drones operating in U.S. air space right now, controlled by communist China, according to my ex-military sources.

As reported by The Epoch Times, Kyle Bass has also warned of the 130,000-acre parcel of land in Southwest Texas that is now owned by the same Chinese billionaire who owns two-thirds of the land in China’s Xinjiang region, where slave labor concentration camps are in full operation. From TET:

The land for the wind farm is owned by a Chinese company called GH America Investments Group, which has since 2015 bought 130,000 acres of land—an area the size of Tulsa, Oklahoma—in Val Verde County. The man behind the firm is Sun Guangxin, a businessman from the northwestern Xinjiang region in China, who has strong ties to the communist regime.

Sun, a former military officer, is currently the richest person in Xinjiang—where the regime is committing genocide against ethnic Muslim minorities. He has a net worth of $1.9 billion, according to Forbes, and was also the vice chairman of the Xinjiang Provincial Youth Federation.

The goal of this, I’m told, is that China plans to construct and operate concentration camps in Texas and other U.S. states, then use them for mass incineration and disposal of all the Americans they plan to kill.

China is also actively and loudly threatening America with a rapid expansion of its nuclear weapons capabilities, according to a recent report published by The Sun (UK):

“We must be prepared for an intense showdown between China and the US,” Hu wrote in a chilling op-ed for the Chinese state-run newspaper. “In that scenario, a large number of Dongfeng-41, and JL-2 and JL-3 (both intercontinental-range submarine-launched ballistic missile) will form the pillar of our strategic will.

Seven months ago, I interviewed JR Nyquist who warns of this exact scenario, describing how China has prepositioned weapons, military uniforms and sabotage equipment in the United States, ready for activation:

In today’s Situation Update podcast, I provide additional frightening details about China’s attack plans and why they are now being accelerated to be activated this year. For example, one of my contacts informed me that an airfield being constructed by China in Texas is slated for completion by the end of July, with expected usage of the 10,000-foot runway by August or September.

A 10,000-foot runway is only needed for extremely large military cargo planes, yet this is a private airfield being constructed in Texas by communist China.

It begs the question: Why is the Pentagon under Joe Biden allowing foreign enemies to construct airfields in the United States? It seems insane. China is invading the United States without firing a single shot, and since China now controls the White House, the media, Hollywood and even Fauci, there seems to be no authority remaining in America that will work to defend the nation against a foreign invasion.

The timetable now appears to be just months away…

DNI John Ratcliffe made this warning in an op-ed in the Wall Street Journal where he argued that “the intelligence is clear” when it came to China.

“Beijing intends to dominate the U.S. and the rest of the planet economically, militarily and technologically. Many of China’s major public initiatives and prominent companies offer only a layer of camouflage to the activities of the Chinese Communist Party,” Ratcliffe writes in the piece.

He wanted that the country was engaged in economic espionage and was looking to “rob, replicate and replace” the intellectual property of American firms in the hopes of replacing them in the global marketplace.

In his op-ed, Ratcliffe warns that China is gearing up for an indefinite stretch of strife with the United States. As such, he believes that it’s time for the U.S. to start getting prepared in return.

“Beijing is preparing for an open-ended period of confrontation with the U.S. Washington should also be prepared,” he wrote. “Leaders must work across partisan divides to understand the threat, speak about it openly, and take action to address it.”

He called that challenge posed by Beijing a “once-in-a-generation challenge. ” He said that Americans have always risen up to face such challenges in the past, from fascism and the Iron Curtain.

“This generation will be judged by its response to China’s effort to reshape the world in its own image and replace America as the dominant superpower,” he adds. “The intelligence is clear. Our response must be as well.”

Ratcliffe’s op-ed is just one in a series of efforts from the Trump administration to raise awareness about China’s crusade to replace the U.S. as the world’s preeminent superpower.

During a recent virtual summit hosted by the Aspen Institute, John Demers, who runs the Department of Justice‘s National Security Division, stated that at least 1,000 researchers had left the country since the DOJ launched multiple criminal cases against several suspected Chinese operatives for espionage.

“Only the Chinese have the resources and ability and will,” said Demers of the foreign influence activity that U.S. intelligence has seen in recent years.

China fires back, but US agencies determined to fight Chinese threat

In response to these efforts, the Chinese government said that the Trump administration was engaged in “an escalation of political suppression,” and warned that such actions would damage America’s global image.

But U.S. authorities are not deterred. Reports surfaced last week that the Trump administration plans to add the state-owned China National Offshore Oil Corp. to its group of companies blacklisted for having ties to the Chinese People’s Liberation Army.

The move comes from the Department of Defense, which is also moving to designate a number of other companies, including Semiconductor Manufacturing International Corp. as being owned or controlled by China’s military.

In addition, the Trump administration also announced last week that it would block cotton imports from a company in China’s Xinjiang region. The latter is where the communist party has detained an estimated one million Uyghurs and other Muslim minorities since 2016.

The communist party continues to detain large numbers of these ethnic minorities in internment camps and prisons where they are subjected to physical abuse and ideological discipline, the latter of which sees them forced to denounce their religion and language.

With the move, U.S. Customs and Border Protection will no longer accept shipments of cotton and cotton products from the Xinjiang Production and Construction Corps due to indications that they were made with slave labor.

Follow CommunistChina.news for more on how China is attempting to undermine the U.S. and the rest of the world.