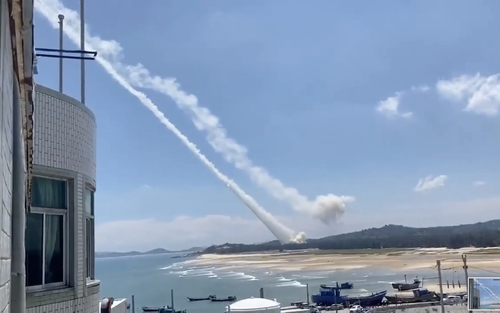 Update(11:17ET): In another ominous sign signaling China intends to escalate its threatening and retaliatory military drills now encircling Taiwan, state-run Global Times has cited a source saying that a PLA aircraft carrier group with a nuclear-powered submarine has now joined the ongoing exercises off Taiwan.

Additionally, the English-language government mouthpiece GT is now calling the five-day drill that have commenced a rehearsal for a “reunification operation” - and says that after Pelosi’s provocative and damaging visit, ”exercises blockading” Taiwan are to “become routine”.

Further, videos of the PLA firing missiles over Taiwan are now circulating on social media, appearing to show local citizens in some locales filming and watching as if it’s a patriotic spectacle…

Beijing is also threatening tougher sanctions to come against Taipei, in order to squeeze the pro-independence movement in Taipei. GT frames the latest economic punishment measures as follows:

Following the Chinese mainland’s suspension of imports of several agricultural products from the island of Taiwan, which is viewed as a sort of punishing fallout from US House Speaker Nancy Pelosi’s visit, residents from the island’s agricultural and business sectors, as well as some local netizens, have expressed dissatisfaction with the secessionist Democratic Progressive Party (DPP), given the close connection between the island and the huge mainland market.

Starting on Wednesday, Chinese mainland customs authorities suspended the entry of citrus fruits including grapefruits, lemons and oranges, as well as two types of fish (chilled large head hairtail and frozen horse mackerel) from the island, in accordance with regulations and food safety requirements.

Taiwan TV EBC shows video filmed by fishermen off Keelung, northern Taiwan, of China’s live fire drills. Boat captain said he turned around back to Port when he saw this. pic.twitter.com/DbPrCutfuK

China is saying this is only the beginning of the 5-day military exercises, identifying major military assets that have joined, including the following:

Meanwhile, the US also has serious military assets near Taiwan, including the USS Ronald Reagan carrier group…

China has kicked off its latest round of war drills Thursday aimed at encircling and pressuring Taiwan in the wake of this week’s House Speaker Nancy Pelosi visit to the self-ruled island, the day after she departed and continued on her Asia tour to South Korea.

According to China’s People’s Daily, this has included PLA command dispatching “hundreds” of fighter jets to enter airspace off the northern, southwestern and southeastern airspaces of the island, at a moment Taiwan’s defense forces are on a heightened state of alert. On Wednesday some half a dozen jets were reported as having breached the ‘median line’ separating the Taiwan Strait. Beijing is promising in essence this is only the beginning.

WATCH: More than a hundred PLA warplanes including fighter jets and bombers conducted joint reconnaissance, air assault and support missions, and more than 10 destroyers and frigates conducted a joint blockade, alert patrol and reconnaissance, around Taiwan island on Thu. pic.twitter.com/xa0YU4K5U5

“The island’s defence ministry said the 11 DF series missiles were fired between 1.56pm and 4pm. It is the first time mainland missiles have flown over the island.”

Taiwanese media outlets are reporting of the unprecedented missile flyover of the island: 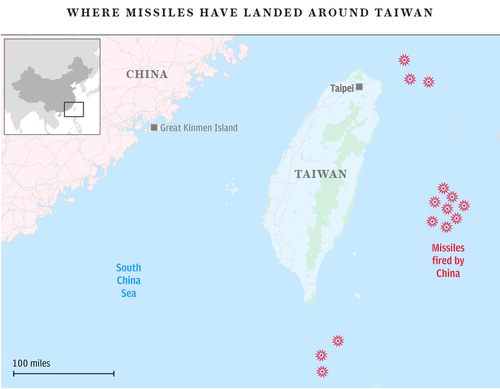 Already there has been a ‘close call’ incident between the two militaries:

Earlier, it [Taiwan's military] revealed suspected Chinese drones had flown above the Kinmen Islands, Taiwanese territory off China’s southeastern coast, and it had fired flares to drive them away.

Major General Chang Zone-sung of the military’s Kinmen Defense Command told the Reuters news agency that the Chinese drones came in a pair and flew into the Kinmen area twice on Wednesday night, at about 9pm (13:00 GMT) and 10pm (14:00 GMT).

Warning flared were then fired: “We immediately fired flares to issue warnings and to drive them away. After that, they turned around. They came into our restricted area and that’s why we dispersed them,” the Taiwanese general said.

The next five days will include live-fire drills and missile tests surrounding the island in these reported locations, as detailed in Chinese state media publications… 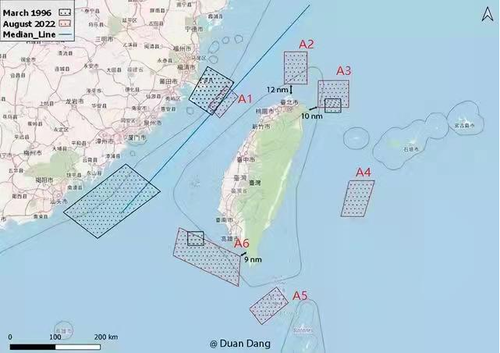 Meanwhile, China is furious over a prior day Group of Seven (G7) statement condemning its military drills. The G7 warned Beijing not to use Pelosi’s visit as “pretext for aggressive military activity in the Taiwan Strait”.

In protest, China’s Foreign Minister Wang Yi has within the last hours canceled what was to be a face-to-face summit with his Japanese counterpart. At the same time increased cyberattacks are being reported against Taiwan government websites in local media.