On the General Calendar of the EF, today is the feast of St Dominic, who died in Bologna, Italy, on August 6th of the year 1221. He was originally buried in the floor of the choir of San Niccolò delle Vigne, the church which had then been recently given to his order, and which has now for many centuries been named after him. In 1233, his remains were moved to a major chapel added to the side of the building, which was then rebuilt in the first part of the 17th century.

The Arc of St Dominic, as it is called, which contains the relics, is actually a collection of pieces from different periods. The sarcophagus, showing six episodes from the Saint’s life, was carved by Nicola Pisano in 1267; the upper part was added from 1469-73 by Niccolò da Bari, whose work was so admired that from it he came to be known as “Niccolò dell’Arca – Nicholas who worked on the arc.” At the top is God the Father, and below, the dead Christ, with two angels on either side, and the four Evangelists at the corners. The angel kneeling on the left just above the mensa of the altar is also his work; Michelangelo added the one on the right in 1494, when he was just 19, along with the statue of St Petronius (the patron Saint of Bologna; second from left right above the sarcophagus) and a statue St Proculus on the back. The 16th century predella just above the altar by Alfonso Lombardi shows further episodes of St Dominic’s life, while his burial is represented on the front of the altar itself in a relief by Carlo Bianconi done in 1768. 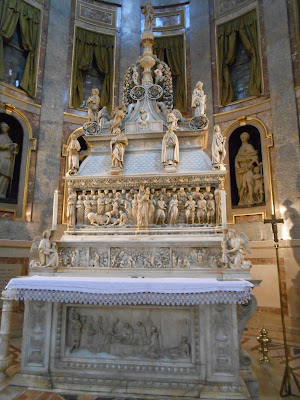 Inside the arc at the back is kept this magnificent reliquary of his skull, made in 1383; it is still taken out for a procession every year on his feast day. 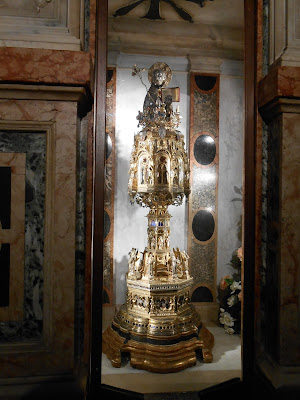 The chapel seen from the cloister.

The Chapel of the Holy Rosary on the opposite side of the building from St Dominic.

The choir stalls were formerly in the nave of the church in front of the principal altar, and further separated from the main nave by a choir screen. The latter was removed after the Council of Trent, the choir then disassembled and rebuilt in a vastly expanded apse behind the main altar. 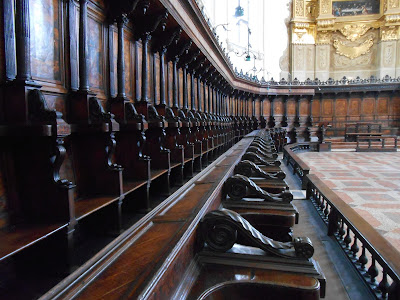 In addition to numerous other decorative details, every seat of the choir has above it an inlaid wooden panel with a Biblical scene. These were executed in only 8 years, 1541-49, by Fra Damian of Bergamo, who also did the lectern shown below. 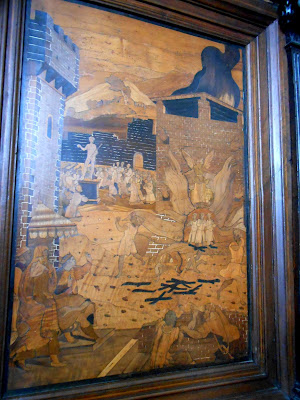 A view of the main nave from the choir. 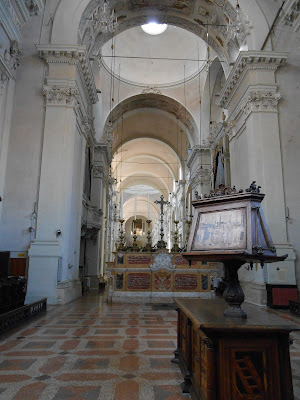 Two details of the lectern; above, the stand for the choirbooks, showing the meeting between St Dominic and St Francis, and below, the door of the armoire beneath where the books were kept. 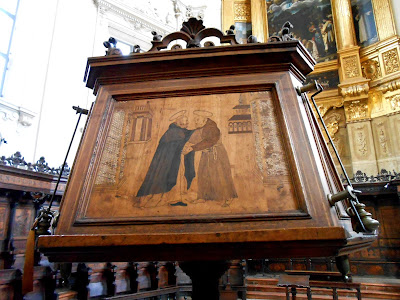 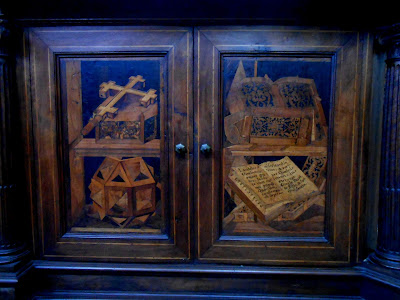 The large painting at the back of the choir by Bartolomeo Cesi shows the Adoration of the Magi above and the Last Supper below. 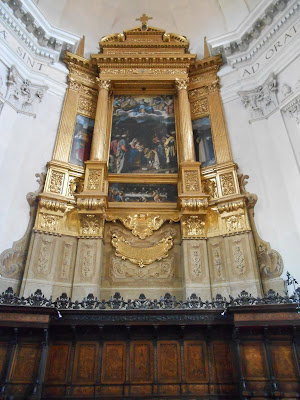 The nave seen from the back of the church.

The former Sacrament chapel, with a painting of St Thomas composing the Office of Corpus Christi.

Loading...
"Not by might, nor by power, but by my spirit, saith the Lord of hosts." Zechariah 4:6
BEFORE IT'S NEWS ON TELEGRAM
GET THE TELEGRAM APP - https://telegram.org/ JOIN OUR CHANNEL - https://t.me/BeforeitsNews
Read it..
BEFORE IT'S NEWS
SIGN UP FOR OUR NEWSLETTER
Today's Top Stories
"Everyone Must Know This Before it is Deleted"
X22 Report The Hunt Is On, [CF] Comes Into Focus, Crimes Against Humanity - Episode 2285b
Donald’s Greatest Show On Earth! Betrayal and Deception. The Nightmare Is Soon To Be Unleashed. Where Is This Coming Messiah Mentioned In Bible Prophecy? Awesome Videos
Nobody Cares That They Are Performing Satanic Rituals Right in Front of Us
RichiefromBoston: We Are Under Attack, Act Accordingly!
Steve Quayle Unplugged! War Looms, Fearful Will Run, We Will Fight Via The Hagmann Report
Silk Masks Offers More Protection than Cotton or Synthetics for COVID-19 Prevention
Solving the Strange, Unusually Geometric Pattern of Storms on Jupiter
(Must Watch) The Cabal Is In Full Panic Mode As Their Events Are Backfiring!!! What's Coming Next Will Be The Final Blow!!!
Deborah Tavares: Black Out Coming! Power Grid Down! September 2020 via Israeli News Live!
Loading...
Featured
Survival Is Just About Surviving
It’s in America - People Arrested for Not Wearing Masks & Signing to Jesus! Brownshirts Revived
100% True: They Rig Metals, While Financing Drug Cartels, Terrorists & Mobsters!! - Great SGT Report Video!
DOJ Uncovers Trump Votes Got Thrown Away, Votes Found in Ditch, Media Says Trump Is Planning a Coup - Must Video
Epic Economist: Unprecedented Monetary Overhaul! Fed Preparing to Deposit Digital Dollars Directly to Each American! - Must Video
Deborah Tavares: Black Out Coming! Power Grid Down! September 2020 via Israeli News Live!
Charlie Kirk: Know the Truth About Breonna Taylor! - Must Video
Survival of Our Republic! Can We Save it? A Somber Analysis! - Must Hagmann Report Video
Robert David Steele: Dr. David Martin Speaks on the Fake Virus & Staged Pandemic! - Must See Video
Dollar Crash Warning, Economy on Life Support, Gas Car Ban in Cali, Unemployment Still Poor! - Must Video
Loading...
Top Global
Breaking! Israel Imposes Lockdown! Is America Next? via AMTV
Nobody Cares That They Are Performing Satanic Rituals Right in Front of Us
Rothschild Rulers
The Seeds Have Been Planted For The Next American Civil War. I Don’t Think Anything Stops It Now.
SGTreport: General Wesley Clark "We're Going to Take-Out 7 Countries in 5 Years"
Wanna bet that Aus’ is a testing ground for what’s coming soon?
WATCH: President Trump Slams China at United Nations: ‘China Must Be Held Accountable’
After Trump Shut Him Up, Vengeful Fauci Made NEW Sinister Plans & He’ll Stop At Nothing To Get It!
RichiefromBoston: A Major Part of Their Plan Was Right In Front Of Our Eyes
Breaking! China Warns What Comes Next In Taiwan!
Loading...
Top Alternative
Biden & Sons: An All-American Crime Family & International Shakedown Syndicate
Edgar Cayce "Fallen Angels" Spoken of in the Bible Are Here to Keep an Eye on Us
Meteoroid Bouncing Back into Space?
It's Thursday Night Live Protest/Riot Coverage
Nobody Cares That They Are Performing Satanic Rituals Right in Front of Us
Rothschild Rulers
The Mandela Effect: The Man From the 'Country' That Does Not Exist! Multiverses
Edgar Cayce: Strange Metals, Minerals and Stones... Their Magical Properties Were Noted by Cayce
The Great Conservative Migration & What it Means for the Future
Ghislaine Maxwell's Friends Predict She Will 'Sell Out' Bill Clinton as New Revelations Emerge!! - Must Video