Gregory DiPippo informed readers last Friday, September 11, of the death of Fr. Anthony Cekada. Although I never met Fr. Cekada in person, he and I would exchange emails from time to time on musical matters. Readers are no doubt aware that he was a great lover of sacred music in all its varieties. At one point, when we were discussing easy choral Masses in Latin with organ accompaniment, he offered to send me copies of a number of Masses for two- and three-voices, which I gladly accepted. He ended up sending me a considerable number of them, which I still have on my bookshelf.

On June 15, 2016, Fr. Cekada sent the following article, with illustrations, to his email list. I knew that Father was a composer of modest and useful sacred music, but I had not realized the extent of his musical training until this charming article and its illustrations. I thought it would be a fitting way to remember him, in spite of the fact that we obviously had profound disagreements in matters of ecclesiology. The article was prefaced with a note.
“Dear Fathers, Seminarians, Church Musicians, Teachers and Friends,
“During the past week or so, I’ve had a lot of correspondence with musicians, including some professionals who live by this glorious art. In one exchange, I told the unusual story of my own musical education in my early and mid-teens. It took place over two intense years, exactly a half century ago. The education took me from being an untrained but eager musical ignoramus at 14 to being the accomplished and technically adept orchestral composer of a major work at 16. The credit for my transformation belongs to one amazing man: Michael P. Hammond. The story of what he did and its final outcome is a testament to the lasting and profound change that one good teacher can make in the life of a willing student.
“Unfortunately, Mr. Hammond soon departed for another teaching post. His successors spurned the traditional principles he had taught me and insisted we composed noisy, irrational junk. I quit composition in disgust, turned to the organ, put all my works away, and, for a half century, gave little thought to my teenage composing days. But very recently, you’ll see, I went back for a look at the music I had composed. It was only with fifty years perspective that I could see in it the miracle that Michael Hammond worked on the teenage Anthony Cekada. I thank God for Michael Hammond — and all great teachers like him!”

“What One Good Teacher Can Do: A Musical Reminiscence”
Fr. Anthony Cekada†

Michael Hammond was not a composer, but he was an amazing man and musician. When I met him, he was about 30, and had just been appointed director of the Wisconsin Conservatory of Music and of the Milwaukee Civic Orchestra.
I studied with him for a mere two years, 1966-1968, when I was 15–17. To me, Mr. Hammond was a spectacular speeding comet, shedding bright light on all corners of the musical universe and leading me on an exhilarating, non-stop journey towards excellence in the composer’s craft.
By that time, Mr. Hammond was already the complete Renaissance man — a polymath in classics, philosophy, sociology and medicine; Rhodes scholar; student at Oriel College; expert in medieval polyphony; instructor in physiology and anatomy at the University of Wisconsin; researcher in neuroanatomy; student of Indian music and the sitar under Ravi Shankar, and, incredibly, a speaker of the Menominee American Indian language! After he left the Conservatory, he would go on to become founding dean of the music department at SUNY-Purchase; Assistant Conductor of the American Symphony Orchestra under Leopold Stokowski, conductor of the Norman Dessoff Choirs; dean of music at Rice University; president of Rice University, and in 2001, be appointed by President Bush as the eighth chairman of the National Endowment for the Arts.
When I began studying with Mr. Hammond, my only previous musical training consisted of Catholic grade school music classes, singing the daily High Mass with the rest of the children and going to concerts, courtesy of the wealthy lady who employed my father as her chauffeur. In grade school, I desperately wanted to play the piano, but it was physically impossible to get one into our tiny apartment.
Fortunately, when I started high school in 1965 at age 14, I finally got access to pianos, and better yet, to practice organs. I found a nun to teach me organ.
I promptly composed my first piece, an organ march to be played after Mass. (Ex. 1). 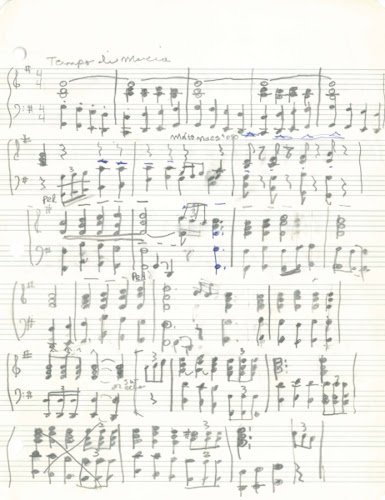 At the same time, I began trying to compose sacred choral music by studying scores of the old masters and trying to imitate them. The post-Vatican II liturgical changes has just been introduced, and the new music that came with it revolted me. Everyone else might produce insipid musical junk for Mass, but not the teenage Anthony Cekada! He would learn how to be a composer and then write real sacred music!
My father’s employer, Paula Uihlein, was a great patroness of the arts in Milwaukee, and when she got wind of this, she arranged for me to meet Mr. Hammond, who had just taken up his post as the conservatory director.
I brought Mr. Hammond all my compositions, and told him what I aspired to do: compose good, traditional sacred music. He said that what I’d shown him was very promising and showed that I had a real ear for the older styles, but that I needed to learn all the correct rules of technique.
The program Mr. Hammond laid out for me was this. Two years of piano training, then organ. He would personally tutor me in counterpoint, in those those principles of composition and theory where he thought I needed the most help, and in introductory orchestration. These lessons, he said, I could immediately apply to my own compositions — a point that he probably figured would keep my interest fired up.
When I graduated from high school, Mr. Hammond added, I should then coordinate taking the formal composition curriculum at the Conservatory with my theology courses at the diocesan seminary. This would ensure that in the long run there would be no gaps in my formal training.
So each week, I spent a very intense hour or so in Michael Hammond’s office, correcting exercises, learning principles and making practical applications to my compositions-in-progress. He was an astoundingly lucid teacher and an exemplary mentor.
To begin our sessions, Mr. Hammond had me select any score from the library or his office that interested me, and pick a page or two in it. We’d then go through my selection to understand what was going on musically and why. At first, I picked Bach cantatas or Mozart symphonies, and I was amazed at his ability to do on-the-spot piano reductions of the dozen instrumental staves [stacked lines of music showing the note for each individual instrument], often in different keys. Little stinker that I was, I later started to test him by picking monster scores from Wagner, Mahler, Stravinsky and Schoenberg. None of it fazed him in the least — instant reduction, then ”Here’s the musical context… Now look at this, this and this…”
After two years of this, alas, Mr. Hammond was off to Purchase and to Stokowski. But what practical effect, if any, did his tutoring have on the musical compositions of Anthony Cekada, 16-year-old aspiring composer?
Up until a few days ago, I couldn’t have given you a clear answer. Sure, Mr. Hammond’s tutoring had undoubtedly improved my composing, but I couldn’t have told you much about how or why. In 1970, I sealed up my completed scores in two envelopes, and never looked at them again.
But my discussion with a young musician on Monday piqued my curiosity, so I opened the envelopes and pulled out the scores. What I found after 45 years absolutely astounded me. I had come to Michael Hammond as a musical ignoramus with grade-school music training, but full of teenage eagerness to get things right. After just two years with him, here is some of what he got me to produce:
A homophonic Ave Maria imitating Palestrina. (Dec. 1966, age 15) With few exceptions, it followed correct voice leading and harmonization rules, but with little touches of the modern or the unexpected here and there. It showed a nice attention to subtle dynamics. A parish choir performed it. (Ex. 2) 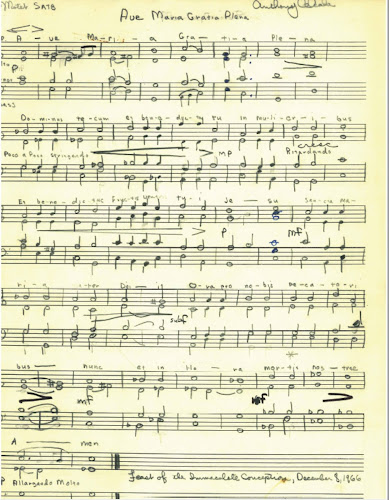 A Renaissance-style Kyrie. (Prob Fall 1966, age 15). Scored for SSTB a cappella in mode I. The two soprano parts were an exercise in how to handle voice lines that overlap.
Motet Acclamationes Sanctae Virgini. (May 1968, age 16). A cappella with two choruses alternating (SSAA, TTBB), possibly imitating Cristobal Morales. Observes all the correct Renaissance rules. Treats successive sections of the text (Tota Pulchra es Maria) in a variety of textures. Eighty bars long! Alas, it was never performed. (Ex. 3) 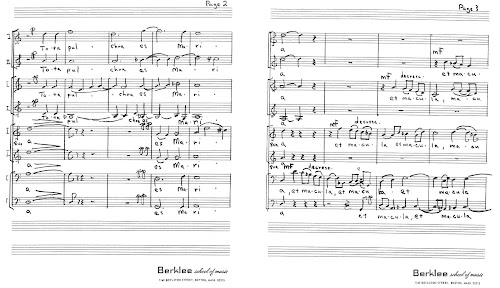 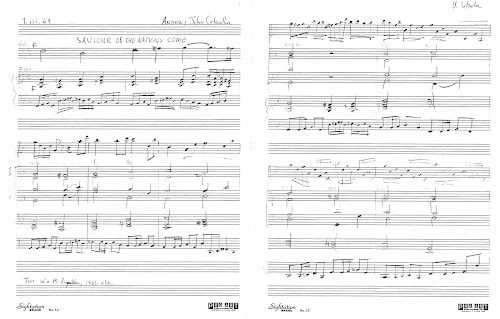 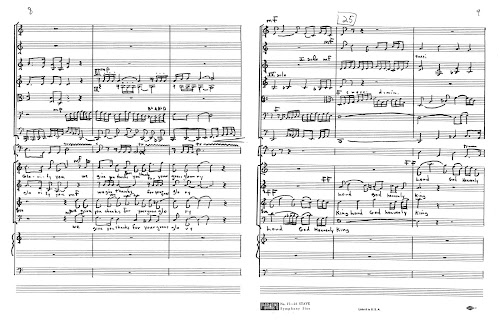 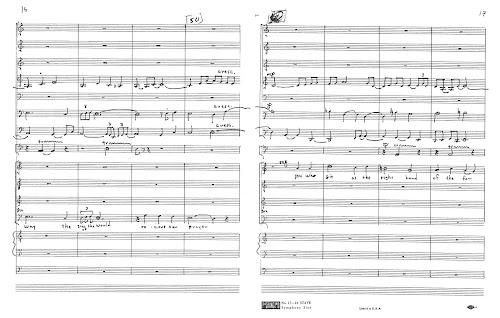 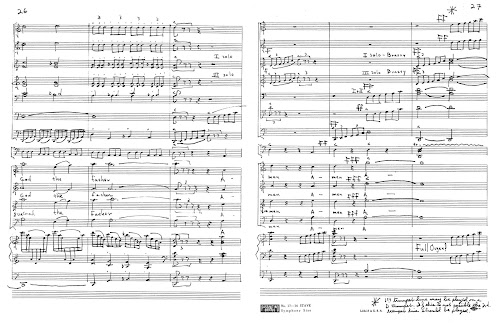 The latter was my magnum opus. I’d long ago forgotten nearly everything about it. Here’s what I confronted when I pulled it out of the old envelope.

Utterly, utterly astounding! In two years, Michael Hammond’s consummate genius at teaching had transformed me into a real composer at age 16. It is only the perspective of fifty years that has driven home the miracle he worked on me.
Mr. Hammond planned to premiere the Mass of Praise and Glory with the Milwaukee Civic Orchestra and the best chorus in the city, but he couldn’t turn down the sudden offer to found a brand-new music school and conduct with Stokowski. The resulting musical ascendancy of the squeaks-and-squawks, “new music” crowd in Milwaukee blocked my efforts to get my teenage “masterpiece” performed. So I never heard it — except in my own head!
But the real masterpiece of the story was not my creation. It was what a good teacher created in me! 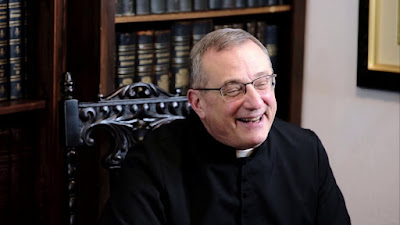