Here is a very cleverly drawn up graphic which Peter found, that uses the Hours of the Divine Office as a frame for explaining the parts of the Mass. Detailed explanations are given in the smalled type at the bottom; right click to open in a separate window or tab, so it will be legible. 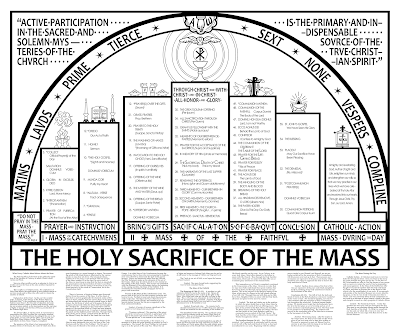 A couple of things to note. For a very long time, it was the standard custom to say Mass in choir after either Terce, Sext or None, depending on the quality of the liturgical day: after Terce on Sundays and greater feast days, after Sext on ferias and minor feasts, and after None on fast days. As a general rule, the next Hour was said after the Mass in part as an act thanksgiving. Here the center of the Mass is placed between Terce and Sext.

The first part of the Mass up to the Collect is associated with Matins and Lauds, since the latter Hours ends with the Collect that will later be said in the Mass. This also reflects the traditional discipline that before a priest said his “private” Mass (so-called), he was supposed to have said at least Matins and Lauds.
The Hour of Prime is associated with the readings, sermon and Creed, just as the creeds known as those of the Apostles and St Athanasius are said at that Hour; the hymn of Prime begins with the words “Now that star of light is risen”, which is associated with the lights carried at the Gospel procession. In the Middle Ages, there also existed the custom of reading either a passage from the Gospels or the Rule followed by the community at the end of Prime; perhaps the creator of the graphic was also inspired by that.
The hour of Terce, at which the Holy Spirit descended on the Apostles at Pentecost, is associated with the Offertory prayers, which include the prayer “Veni creator Spiritus.” The Communion rites are associated with Sext, and the conclusion of the Mass with None, and the rest of the day’s activities with Vespers and Compline.