We have just received news of the death earlier this morning of Fr Giuseppe Vallauri, a priest of the Sons of Divine Providence, and one of the pillars of the early movement to preserve and promote the traditional Latin Mass. Not long after the Ecclesia Dei indult was promulgated, Don Vallauri, who was (if I remember correctly) stationed in Ireland at the time, made a tutorial video on how to the celebrate the TLM called “The Most Beautiful Thing This Side of Heaven.” Many of the priests who offered the old Mass under the indult regime learned to do so at least in part from this video (back when there was no internet and people still had VCRs.) For many years, he worked in the Roman Curia, and celebrated the Mass for pilgrims at various shrines in the area of Rome, at weddings and funerals, and in more recent years, as the TLM has continued to flourished, helped with the magnificent Holy Week services at the FSSP church in Rome, Santissima Trinità dei Pellegrini. (He had a beautiful baritone voice, and was perfect as the Christus for the singing of the Passions.) 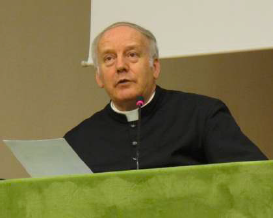 Deus, qui inter apostolicos sacerdotes famulum tuum Joseph sacerdotali fecisti dignitate vigere: praesta quaesumus: ut eorum quoque perpetuo aggregetur consortio. Per Christum, Dominum nostrum. Amen.
God, who among the apostolic priests made Thy servant Joseph to flourish with priestly dignity: grant, we beseech Thee: that he may also be joined unto their perpetual society. Through Christ our Lord. Amen.
Fr Vallauri was born in the town of Robilante, near Cuneo in the northern region of the Piedmont, on Sept. 7, 1945. He entered the congregation of the Sons of Divine Providence (founded by Don Giuseppe Orione in 1903, and also known in Italian as the “Orionisti”) in 1956 at the age of 11. He served in the order’s parish in Bantingford, England for 24 years (his English was excellent), then Ireland, before going to Kenya in 1996. In more recent years, he served as an archivist in the Roman Curia and at the community’s house in Pompei. He was 75 years old, a professed religious for 58 years, and a priest for 48.

Loading...
"Not by might, nor by power, but by my spirit, saith the Lord of hosts." Zechariah 4:6
BEFORE IT'S NEWS ON TELEGRAM
GET THE TELEGRAM APP - https://telegram.org/ JOIN OUR CHANNEL - https://t.me/BeforeitsNews
Read it..
BEFORE IT'S NEWS
SIGN UP FOR OUR NEWSLETTER
Today's Top Stories
Explosive! Steve Quayle, Mike Adams, Gary Heavin: December Deadly Surprise!
Stark Warning Just Issued By President Trump and An Even Eerier Warning From a Chinese Citizen
Here Is Bill Gates’ Injectable Biochip, For Those Who Think It Is Conspiracy Theory
Kraken Release Day! Sidney Powell's First 'Biblical' Case To Be Filed In Georgia
Jeffrey Prather - Krakened! Not Myth But Real! The Sting of the Steal Revealed! This Isn’t Over! It’s Just Getting Started! - Must Video
David Icke: Something Unexpected Is Coming! They Don't Want Us To Know This
Benjamin Fulford: Arrest of Cabal Agent in Japan Will Be a Game-changer & The Red & White Dragons Update
X22Report: Keystone Is the Start, Gettysburg Was the Turning Point of the War, Watch PA! - Must Video
America Important Situation Update Reports for Nov. 24th, 23rd and 21st – Plus a New Interview With General Thomas McInerney
Sidney Powell's “Kraken” Is DOD Cyber Warfare Program! We Are at War!
Loading...
Featured
Covid-19 Test Centre Security Guard Attacks Enchanted LifePath In Liverpool - Journalist Ambushed
Best & Taylor Special Report (11/25/2020) w/ Guest Steve Fletcher: Is December 14th A Marked Day? Obama's Third Term? — Great Show!
The “Bombshell” That Wasn’t ~ Ep. 1401 ~ The Dan Bongino Show
Predicting a Second Trump Term, Sidney Powell Says ‘Massive’ Georgia Lawsuit Coming by Thanksgiving Eve
Anonymous: "You Need to Hear This, They Left a Message!"
Last Chance: Inflation Comes Next!
Biden and Harris -- Exposed
Sidney Powell's “Kraken” Is DOD Cyber Warfare Program! We Are at War!
Trump Will Be Inaugurated!! Here's How!! We Will See Deepstate High Profile Arrests!! Biden Making Sure Of It!! (Must Video)
Breaking Now: Urgent PA Senate Election Hearing With Giuliani! This Could Change Everything! - Next News Network Must Video
Loading...
Top Global
Persian Gulf update 11/25/2020..Saudi Aramco says domestic supply not affected by Houthi-led missile attack
The NWO Floating Trial Balloons: Qantas and Ticketmaster Will Require YOU To Be Vaccinated For Entry
Communist China Says All Humans Should Be Marked, Tracked to Prevent Spread of Covid-19
UK Thought Police: When Questioning Official Narratives Becomes ‘Terrorism’
Vaccines: Whistleblower in 2020 - David Knight Show. Great Video!
Medical Police State Horrors in Australia: Young Man Choked Out, Slammed to the Ground, Heaved Out of a Restaurant for Not Wearing a Mask! +Videos
The Great Defiance! Fight the Bully
A Child Infected with HIV Every 100 Seconds – UNICEF
Breaking: "Holy Land Attack Israel Hits Rural Damascus Iran Military"
Tracking the Vaccinated With RFID Chip! Dark Winter Is Code Name For The Beginning Of The Great Tribulation Or The Times Of Jacob’s Troubles! Great Videos!
Loading...
Top Alternative
Monopoly Men (Federal Reserve Fraud). Great Documentary Featuring Eustace Mullins. Excellent Video!!
The Colossal Fall of Fox News! - Dr. Steve Turley Must Video
COVID19 Kills Dog - Department of Health Testing All Dogs and Cats
Exposing The Beast System Behind "The Great Reset"
A Third of Guests at Ohio Wedding, Including Bride and Groom, Test Positive for COVID
PA Judge Blocks Certification! – PA Legislature Holds Public Hearings!
Can’t Happen Soon Enough
What's in your house? What are you putting on your skin? -- The following cursed items (below) were found in BEZAI's house: -- "And the brothers immediately by night sent away both Paul and Silas to Berea, who having arrived, into the synagogue of the Jews went." -- 17:10.
We are not in Kansas anymore.
The NWO Floating Trial Balloons: Qantas and Ticketmaster Will Require YOU To Be Vaccinated For Entry