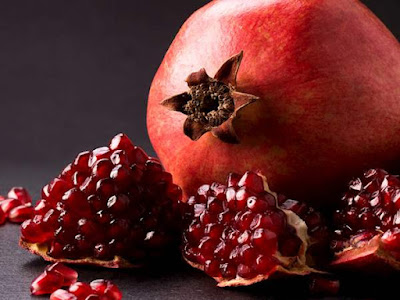 Sometime shortly before Advent each year, the grocery stores start to carry pomegranates. I always look forward to their appearance, as it is probably my favorite fruit, with its ruby-red gem-like seeds, sweet, juicy, and crunchy. Eating a pomegranate, however, is something of a process. The recommended method is to cut out a chunk from the top and bottom, score the rind in fourths, and break it apart. Then one goes through it patiently and pops out the seeds. It’s messy. The red juice is sticky and stains. Sometimes the seeds fly out in an unexpected direction.

The traditional liturgy reminds me of a pomegranate. The gems are hidden inside, wrapped in fold after fold of membrane. It takes work to get at the fruit, and one cannot be unaffected at the end of the labor: one’s fingers are sticky and stained. Its fruit, a symbol of fertility, is plentiful and sweet to the taste. The juice is dark and rich, like a drink produced by distillation. The reformed modern liturgy, on the other hand, reminds me of the plastic cup of pomegranate seeds one can buy at the store, prepared and packaged for easy consumption. Sure, one gets to eat the seeds quickly and readily; but did he appreciate them as much? Did he get a sense of where they come from? Could he ever know from the convenient plastic cup how a pomegranate even looks, or why it is an apt symbol of fertility?

With the help of Louis Charbonneau-Lassay

The French author Louis Charbonneau-Lassay (1871–1946; hereafter C-L) was one of the most fascinating, versatile, and erudite researchers of Christian archaeology and symbolism that the world has ever seen. Unfortunately, a large part of his work—and we’re speaking here of tens of thousands of drawings, notes, and other items—was never definitively assembled into the series of books he had planned out. The one major work he did publish in his lifetime, The Bestiary of Christ, has appeared in English only in an expurgated version. The finished manuscript of his magnum opus, The Vulnerary of Christ, on the five wounds of Jesus and the long history of devotion to the Sacred Heart, was stolen shortly before his death. Only recently, thanks to a painstaking reconstruction by Gauthier Pierozak, was it possible to publish it in French; Angelico has just brought out a deluxe, copiously-illustrated English translation, which I most highly recommend.

I am therefore delighted that Gauthier, who is in possession of C-L’s archives, responded enthusiastically to my inquiry to him as to whether C-L had left behind any notes and sketches concerning this fruit. He obliged with the material that follows, which I have slightly edited and arranged. 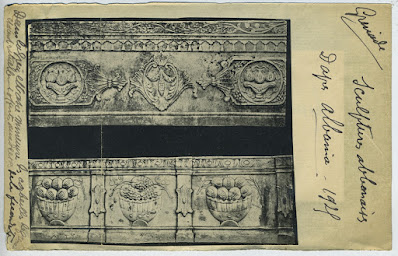 An emblem of fecundity

As we have seen, the pomegranate is an emblem of fecundity, as it contains in its perfectly round fruit a multitude of seeds.

In a letter to C-L dated April 1925, René Guénon suggests that the pomegranate is an emblem similar to the pine cone, which is also a symbol of fecundity. According to the scholars Nelson and Dietrich, the pomegranate, as well as the egg and wheat, had the meaning, in ancient times, of the gift of regeneration, because they contain in themselves some vital force in large proportion. In ancient Greece, pomegranates in a basket symbolized fecundity/fertility.

In ancient times, the pomegranate was a fruit dedicated to Juno, goddess of marriage and fertility. Some representations of Venus have been found in Sardinia where she holds a pomegranate that is open. A similar meaning is at work in the custom in China of offering pomegranates as an engagement gift. They were an omen of good luck for having children.

C-L’s notes about the pomegranate contain a number of biblical references to the spiritual fecundity of God or of Christ:

In a way, the pomegranate symbolizes the source of multitude, like the horn of plenty, but also, more generally, the Word of God. The Pomegranate contains all the possibilities of creation, just like the mind contains the potential for all thoughts until they are expressed with words. 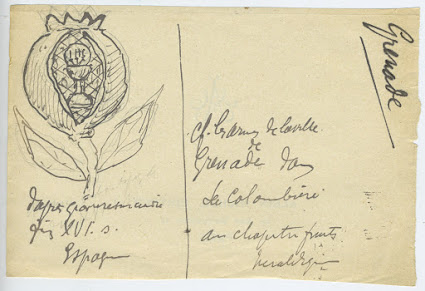 An emblem of union, charity, love, and humility

The pomegranate is also an emblem of humility, because its succulent seeds are hidden behind a rough, unprepossessing exterior.

The pomegranate is an emblem of charity because it gives of what it contains that is most delicious and precious: it gives itself just like Christ did in his infinite charity through his Eucharist, born in his heart—that heart which he allowed to be opened for us through the striking of the spear of the soldier during his Passion, that the divine red liquid might flow forth.

Saint Francis of Sales (1567–1622): “Thus love is oftentimes represented by the pomegranate, which, as it takes its properties from the pomegranate-tree, may be said to be the virtue of this tree; so again it seems to be its gift, which it offers to man by love; and it is its fruit, since it is eaten to please man’s taste; and finally it is, so to speak, its glory and beatitude, since it bears the crown and diadem” (Treatise on the Love of God, book 11, chap. 19). 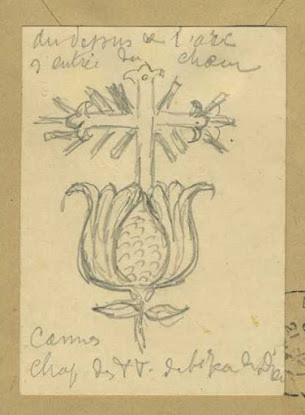 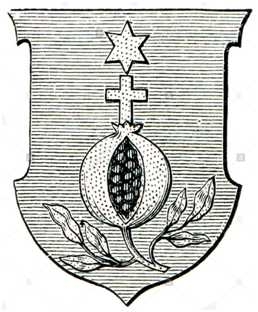 An emblem of Jesus Christ

The Brothers Hospitallers of Saint John of God are a Roman Catholic order founded in 1572 in Granada, Spain. Their coat of arm shows a pomegranate, with an opening revealing the seeds inside, surmounted by a cross and a star. It reminds of the decisive moment when God in a vision told Saint John of God (1495–1550): “Granada will be your cross” (granada in Spanish = pomegranate). To that effect, there is identification between the pomegranate and Christ, and more specifically the wounded Heart of Jesus.

The seeds can represent the Christians unified by the Church; the spiritual seeds sown by Jesus through his words; the drops of blood shed by Jesus on the Cross. The fruit, with its red color and “ventricular” structure, suggests an oversized heart, in a way analogous to how the rose has often represents the heart. The large number of seeds in this red fruit can symbolize the drops of blood that Christ shed for humanity, but also all the Christians within the church.

In a letter dated 2/25/1925, René Guénon tells C-L: “I do not recall having seen any emblems associating the cross to the pomegranate, but I am not surprised that there is a relationship, because the pomegranate is a symbol very similar to the rose, which has also, among other meanings, the one of fecundity. This symbol is not only Phoenician, but also Hebrew, since pomegranates appeared on the Temple of Jerusalem.” And Charbonneau adds as a note: “and on the robe of the High Priest.”

C-L in a note: “Similar to the emblem of the walnut in the West, the oriental emblem of the pomegranate was however rarely used to figure Jesus Christ, even though it was a widespread image symbolizing fecundity among the Phoenicians, and through them it spread to all the peoples in the Mediterranean basin. Doesn’t it perfectly fit our Lord Jesus whose spiritual seed was fruitful, and from which a whole race of Christians comes, as numerous as the grains of sand on the seashore? Everything in him was fruitful: his words, his actions that produced miracles, his blood that saved the world.”

Another note records that the ancient Hebrew rites in use at the time of Christ required that the sacrificial lambs be roasted by using a spit made from the pomegranate tree. If confirmed, this would once again identify the pomegranate emblem with the cross, and the cross with fertility. 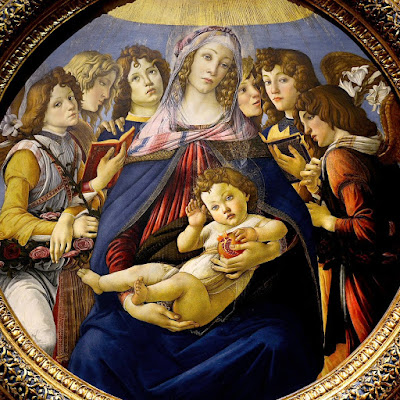 An emblem of the Eucharist

Pomegranates were found associated with grape vines in Carthage, Tunisia, during archaeological research in 1910. The grape vine is obviously a Eucharistic symbol (the “blood of the grape” is its juice), and so closely connected with the pomegranate in meaning.

Handwritten note by C-L: “Another idea seems to have come to light among the old Christian mystics: the pomegranate opens itself to offer its inner fruits. In a similar way Jesus Christ offered himself voluntarily to die for us, and he presented us with his open side under the warm sun of his love, and at the bottom of this wound one can find the germ of all fruits that his sacrifice has produced on earth” (meaning: the open Sacred Heart, hidden in his chest).

Tellingly, in the painting by Botticelli from ca. 1497, The Madonna of the Pomegranate (full image above), the baby Jesus holds an open pomegranate fruit over his heart, as we see more clearly in this detail: 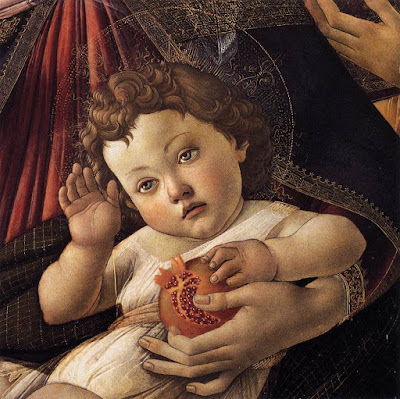 As C-L’s work The Vulnerary of Christ explains, this is exactly the sort of subtle reference we find everywhere to the cult of the Sacred Heart that predated the more recent phase begun by the appearance of Christ to St. Margaret Mary Alacoque at Paray-le-Monial.

One might be reminded of a medieval depiction in which hosts are shown as if they have emerged from the wounded side of Christ—signifying the Lord’s spiritual fecundity in the power of his Passion, and, more particularly, the sacramental fruitfulness found in the Holy Sacrifice of the Mass and in the Eucharistic food that proceeds from it. 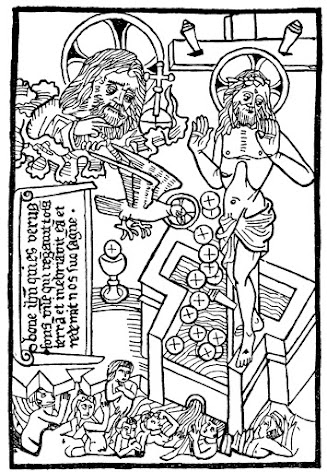 The pomegranate as an antidote

Ancient books identify the pomegranate tree root as a powerful vermifuge (an agent that destroys or expels parasitic worms). The mystics of the Middle Age compared the intestinal worms to inner demons, and, as such, gave pomegranate roots the symbolism of fighting the evil within one self and expelling it.

Given this rich liturgico-theological symbolism, I hope you will have the opportunity to acquire whole pomegranates for your table this Advent, and then enjoy extracting their sweet and abundant fruits with a better appreciation for how God speaks through all His creation.