The answer to yesterday’s quiz, like the painting which was the subject of it, is rather complicated. Let’s start with the simplest part, which was not necessary to state for a correct answer. The Saint depicted is Caterina de’ Ricci, a Dominican nun who was born in 1522. She entered the Order’s convent at Prato, a small city 12 miles to the northwest of her native Florence, when she was 13, and died there on February 2nd, 1590. When she was beatified in 1732 by a fellow Florentine, Pope Clement XII Corsini, her feast was assigned to today on the Dominican calendar (still its day in the EF), the first day on which her Office would have both its Vespers. She was canonized by Pope Benedict XIV, who as cardinal, had been the “promotor fidei”, more commonly known as “the devil’s advocate”, for her cause; as Pope, he announced his decision in favor of her canonization on the feast of St Philip Neri, another Florentine, to whom she had once miraculously appeared in Rome without physically going there. (The two Saints also exchanged a number of letters.) In the OF Dominican calendar, she has been moved closer to the date of her death, on February 4th. 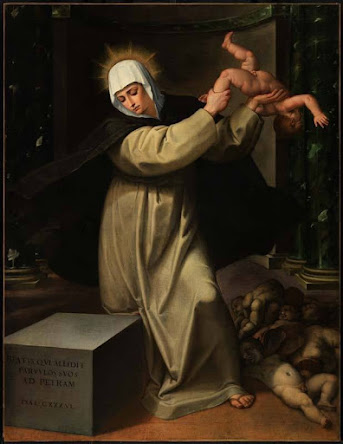 The painting is various attributed to Alessandro Allori, Battista Naldini, or Giovanni Maria Butteri, and was apparently made shortly before the Saint’s death. The depiction of a halo on a living person is very unusual, but Catherine was the recepient of extraordinary mystical graces throughout her life, and a person whose eventual canonization could reasonably be foreseen.

Now for the more complicated part. The title of the painting is “St Catherine de’ Ricci dashes down the children of Babylon.” Several commenters correctly identified it as an allusion to the last words of Psalm 136, which the Psalmist addresses to the “wretched daughter of Babylon”: “Blessed be he that shall take and dash thy little ones against the rock.” However, a crucial point is that the quote has been altered to “Blessed be he that dasheth (present tense) his own (‘suos’ rather than ‘tuos’) little ones on the rock.” The children do indeed symbolize the vices (as explained below), specifically, nascent vices; St Catherine, a model religious for over 50 years, is presented as a person from whom one may learn to overcome vices before they take root and become habits. The rock is hewn into an imperfect square, rather than in a natural state, as an allusion to Christ’s explanation of Psalm 117, 22, “The stone which the builders rejected has become the corner-stone” as a reference to Himself. 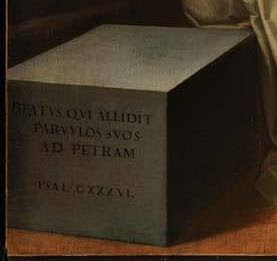 The purely allegorical intent of the painting is demonstrated by the lack of blood on the stone, and the fact that the childen in the background are seen to be dead from the color of their skin, but are not otherwise visibly damaged.
Already by the later second century, a pagan writer against Christianity called Celsus had used this Psalm verse as an example of the bad morality supposedly taught by the Church. To this, the great Biblical scholar Origen replied in his Apology against Celsus (7.22) that the passage was to be understood allegorically. “(T)he little ones of Babylon (which signifies ‘confusion’) are those troublesome sinful thoughts which arise in the soul, and he who subdues them by striking, as it were, their heads against the firm and solid strength of reason and truth, is the man who dashes the little ones against the stones; and he is therefore truly blessed. God may therefore have commanded men to destroy all their vices utterly, even at their birth, without having enjoined anything contrary to the teaching of Christ.” This interpretation was accepted and made the standard by many other early Christian writers, starting with St Hilary of Poitiers, who also very naturally associated the rock against which the little ones are dashed with St Paul’s words in 1 Corinthians 10, 4, “and the rock was Christ.”
The award for Best Wildly Incorrect Answer is given to Christoph Hagen, who suggested that it represents “the Blessed Virgin sav(ing) a child, which is falling down from a window of a tower or another high building.” I did say that in proposing the quiz that all of the details in the foreground were relevant, and this explanation does not account for the several other child whom Our Lady would have thus failed to save. The Best Humorous Answer, as deemed by myself also by voting in the combox, is by Michael R.: “Susan from the parish council takes it upon herself to quiet down the cry room at church.”

As a final note, this painting was made in the artistic period known as Mannerism, an intermediate phase between the Renaissance and the Baroque. Mannerist artists were much given to complex allegories and learned allusions, and far too often, not much concerned with decorum; nudity is fairly common in their works, even those on religious subjects. (Mannerists also tend to make extremely busy paintings, although this is not the case here.) For this reason, treatises on painting written for the artists of the Counter-Reformation, such as those of Gabriele Palleotti, the first archbishop of Bologna (1582), and the painter Giovanni Bellori (1672), insisted that religious art must not only be beautiful, but also clear and decorous. Their concern was that paintings like this one were too weighted down by learned references to be easily understood, and that their lack of basic decorum (e.g., the inclusion of a heap of dead babies) made them ineffective in conveying the more important religious meaning they were supposed to convey.