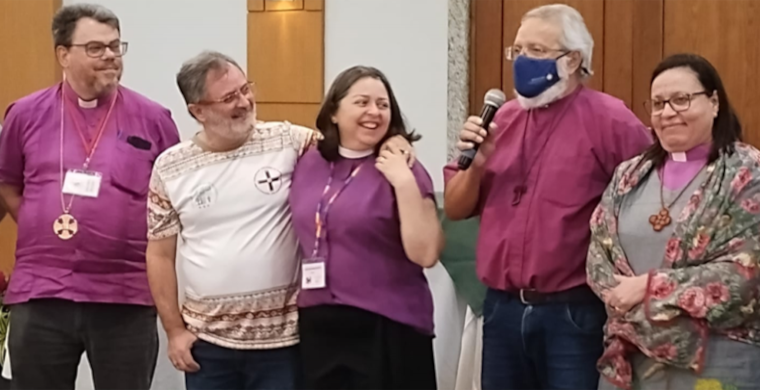 Another division occurs in the Brazilian Anglican scenario, and to be more precise, a division between orthodox Anglicans, and within FCE. On the page below, those interested can read the full material (in Portuguese) https://www.igrejaanglicanareformada.com.br/ which explains the reasons why Bishop Francisco Buzzo and two other clergy just joined the Evangelical Coalition of Free Church of England (FCE), a movement that naturally originated within FCE in 2003 and at that time caused great pain to members of the church, or the churches, once they separated. In general, we can summarize that the whole issue of discord at the time (2003) revolved around theological and liturgical issues with regard to evangelical versus Anglo-Catholic tendencies within FCE (seeing my unfounded). As a result, there was division within an already small church such as FCE. Property disputes naturally also formed part of this issue, which apparently extends to the present day. With time it is known, there has been reconciliation and some of the churches that had founded the Evangelical Collision have returned to an FCE.

Well, what happened here in Brazil with the Anglican Reformed Church was basically the following: The then Bishop Emeritus Francisco Buzzo, former Roman Catholic priest of the Diocese of Jundiaí, SP, who for personal reasons left to the Church of Rome and founded the IAR (Anglican Reformed Church), after the arrival of Bishop Josep Rosselo in Brazil, he joined this one and both after the failures to join GAFCON they managed to join the Free Church in England. Such a well-defined union, after a long period of preparation, Bishop Rosselo acting as Commissioner of Bishop Primus of FCE in Brazil culminated in the creation of the South American Diocese of the Free Church of England. This happened in 2018, the year in which I was as a diocesan delegate to the newly created Diocese at the 157th FCE Call.

Well, little did we know that the then 1st Diocesan Bishop of the South American Diocese was already working to take over a parish in the Diocese of Southern England, a fact that was consummated and today the then Bishop is parish priest of the Church of Christ Emouth in Southern England, whose Diocesan Bishop is Paul Hunt. And how was Brazil and the newly created Diocese? Well, I don’t think this was Bishop Rossello’s concern. At the time, I started to question all of his actions, commissions for the special canons he created in order to do everything he wanted to do and other actions that I understand need not be mentioned here. Fact is, I was asked to left Diocese him including Bishop Buzzo in the most stupid and possible way, suffering accusations that border on the time of the holy inquisition.

Well, the Spanish Bishop did everything he did and moved to England. Here in Brazil, he left clerics and laypeople of his trust as responsible and Bishop Buzzo, once emeritus, remained so. And practically two years after his diocesan inactivity I received the news that he broke with a South Western Diocese of FCE of which he was Bishop Emeritus and resuming the episcopal activities he joined the aforementioned FCE Evangelical Coalition.

There are many questions that I ask in this moment, but to stay true to the purpose of this brief article, which I repeat, is not scientific, I register my defense with the person of Bishop Primus Dr. John Fenwick who is unjustly accused by Bishop Francisco Buzzo as Anglo-Catholic (see website above). I also note that what we know historically went on in the sad year of 2003 is happening again in 2021. I ask: did Bishop Buzzo forgot everything he learned in the Roman Catholic Church where he was a priest for many years? Why is there so much aversion to the catholicity of the Church of Christ, of which the Anglican Church is unequivocally a part? These and so many other questions touch me right now.

And finally, obviously I ask myself: how are God’s people in the face of so many divisions? Divided, separated, divorced. Is it just from churches or also from Christ? They are always the most important and not our vanities and the bad testimony that we give, often through angry preaching against other denominations.

The truth hurts, but it needs to be told. We all need conversion.

I conclude by reaffirming that I completely disagree with the unfounded accusations that Bishop Buzzo and his clergy are making to Bishop Primus Dr. John Fenwick regarding the Anglo-Catholic tendency. I have a testimony of him by a man of faith, a good pastor and someone who is zealous for a Church of Christ. Let us pray for an end to divisions and for good dialogue and peace between all.

The Rev. Rogerio de Assis + is Theologian, specialist and master in Education in São Paulo, Brazil

ANOTHER DIVORCE IN BRAZILIAN ANGLICANISM

It is known by all Anglicans who study and spread around the world that Anglicanism in general does poorly in terms of the motto of “unity in diversity”. It is also known that there are several sites, as it were, apostolic and that in this sense the historic Apostolic See of Canterbury has not been considered as a single site for a long time. It is known that within the “Anglican Communion” itself, there are so many internal divisions that have been occurring over time and that these have emerged many other groups, such as: GAFCON, ACNA, REC, FCE, Anglican Continuing Movement, and so many other denominations that we know as Anglicanism. Finally, since this is not a scientific article that requires academic rigor, it is known that Anglicanism is divided between liberal Anglicanism (linked to the Archbishop of Canterbury) and orthodox Anglicanism (those linked to GAFCON). Both trends are spread across the world, not just in the old world or the first world as some prefer to say. Finally, another division took place on the Brazilian Anglican scene and I am referring to the Anglican Reformed Church.