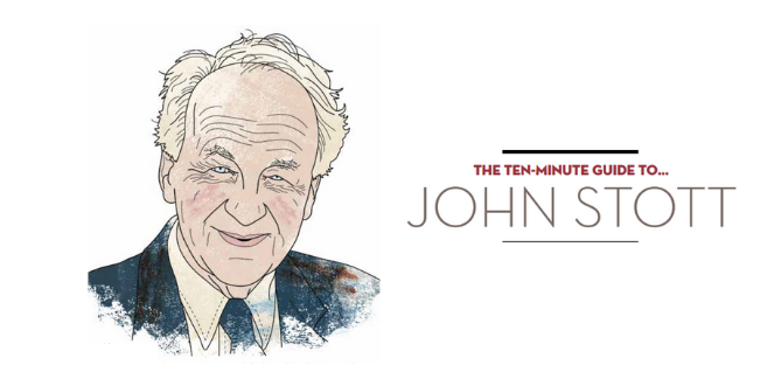 John Robert Walmsley Stott was born in London on 27 April 1921 to Sir Arnold and Emily ‘Lily’ Stott. His father was a Harley Street physician and self-confessed agnostic, while his mother, who had been raised Lutheran, attended the nearby All Souls Church Langham Place, opposite the BBC. At the age of eight, Stott was sent to Oakley Hall prep school, now a hotel, followed by Rugby School. It was there that in 1938, aged 16, he heard Eric Nash (nicknamed ‘Bash’), a Church of England cleric and schools worker, give a talk based on Pilate’s question: “What shall I do, then, with Jesus who is called the Messiah?” (see Matthew 27:22). Stott later remarked that this “hit him between the eyes” because he had no idea he had to do anything with Jesus.

After the talk, Stott continued to ask questions of the visiting clergyman, who took him for a drive in his car and explained the gospel to him. During the remainder of the afternoon and into the evening, Stott considered the cost of discipleship. That night, at about 10 o’clock, he crept out of bed in his dormitory, knelt by his bedside and gave his life to Christ. Stott later explained that he saw no flash of lightning, heard no peals of thunder and experienced no electric shock, but the following day he knew something profound had happened. Indeed, this simple step changed the entire direction, course and quality of his life. ‘Bash’ continued to pray for Stott and wrote to him every week for five years, advising him on how to grow in his Christian life.

After leaving school, Stott read French and Theology at Trinity College, Cambridge, where ‘Bash’ had also studied. He was active in the Cambridge Inter-Collegiate Christian Union, graduated with a double first, and was elected a senior scholar. Following his time at Trinity, Stott transferred to Ridley Hall where he trained for ordination in the Church of England. He was ordained in 1945 and went on to serve a curacy at his childhood church, All Souls. In 1950, aged only 29, he was appointed rector.

In the years that followed, Stott developed a global reputation as a preacher and Bible expositor. He travelled extensively and authored more than 50 books, some of which appear only in Chinese, Korean or Spanish, as well as numerous articles and papers. His best-known work, Basic Christianity (IVP), sold 2 million copies and has been translated into more than 60 languages. In 1959, he was appointed a Chaplain to the Queen and, on his retirement in 1991, an Extra Chaplain. In 2006 he was awarded a CBE in the New Year Honours’ list, for services to Christian scholarship and the Christian world. Stott remained celibate his entire life. He said the gift of singleness was “more a vocation than an empowerment, although to be sure God is faithful in supporting those he calls”.

Stott’s establishment credentials perhaps suggest a conservative rather than radical disposition, but that characterisation is misleading for a number of reasons. It not only fails to recognise the true meaning of the term ‘radical’ (about which, more later) and the possibility of radical conservatism, but also the fact that Stott’s theology changed over time. So how did this radicalism express itself?

Firstly, Stott was a nonconformist. He understood and practised the often neglected biblical call to God’s people to be different from the culture around them. Stott observed that in the four great sections of scripture (the law, the prophets, the Gospels and the letters), there is the same radical call to nonconformity. Israel was repeatedly warned against conforming to the surrounding nations. Jesus challenged his disciples similarly: “Do not be like them”, he commanded, referring to the religious hypocrites (Matthew 6:8) and “rulers of the Gentiles” (Matthew 20:25). “If we claim to be Christian,” wrote Stott, “we must be like Christ.” Stott was not ambitious for himself, nor did he seek power, status, or wealth — which he gave away.

Secondly, Stott had a kingdom vision. He lived and worked to see the day when “The kingdom of the world has become the kingdom of our Lord and of his Messiah” (Revelation 11:15). And he died listening to the scriptures and Handel’s Messiah. Stott was not content to be a great Bible expositor or church leader. He wanted to change the world. It was this kingdom vision that drove him in 1969 to establish Langham Partnership to equip theological educators and Bible communicators in non-Western countries. And Stott’s own funds went to support theological training — using the proceeds from the sales of his books.

Thirdly, Stott radically transformed the dominant evangelical understanding of mission at the time. He was committed to “double listening”. He described this as “listening to two voices at the same time: the voice of God through scripture and the voices of men and women around us. These voices will often contradict one another, but our purpose in listening to them both is to discover how they relate to each other. Double listening is indispensable to Christian discipleship and Christian mission”. Crucially, Stott listened to the often-ignored voices of the majority world in Latin America, Asia and Africa. He listened in a way that few white leaders had done before, and the experience changed his theology, not least regarding the centrality of social activism in mission. The 1974 Lausanne Covenant, of which Stott was chief architect, expressed “penitence both for our neglect and for having sometimes regarded evangelism and social concern as mutually exclusive…we affirm that evangelism and socio-political involvement are both part of our Christian duty”. At the end of an interview published in Christianity Today in 2006, Stott concluded by remarking: “My hope is that in the future, evangelical leaders will ensure that their social agenda includes such vital but controversial topics as halting climate change, eradicating poverty, abolishing armouries of mass destruction, responding adequately to the AIDS pandemic, and asserting the human rights of women and children in all cultures. I hope our agenda does not remain too narrow.”

Fourthly, Stott had a vision for whole-life discipleship. He established the London Institute for Contemporary Christianity (LICC) in 1982 to help Christians engage the world and its cultures with the gospel by living as whole-life disciples in every area of life and work. Its driving themes were the integration of the gospel in all of life, and the penetration of the secular world. In The Contemporary Christian (IVP), published in 1992, Stott wrote: “It is a wonderful privilege to be a missionary or a pastor, if God calls us to it. But it is equally wonderful to be a Christian lawyer, industrialist, politician, manager, social worker, television script-writer, journalist or home-maker, if God calls us to it. According to Romans 13:4 an official of the state (whether legislator, magistrate or police officer) is just as much a ‘minister of God’ (diakonos theou) as a pastor. It is the hierarchy we have to reject; the pyramid we have to demolish.”

In the last decade of his life, he was asked what, if anything, he would change if he were to live his life again. He paused thoughtfully and answered: “I would pray more.” This was the response of someone who, while at university, set his alarm clock to 6am to pray. In later life, this changed to 5am. Stott kept a notebook of situations and people to pray about. He began and ended each day in prayer, and he prayed throughout the day. His life was infused by prayer. “Prayer is not a convenient device for imposing our will upon God, or bending his will to ours,” he wrote, “but the prescribed way of subordinating our will to his.”

Stott was a true radical, and it’s a word he appreciated. In his last book, The Radical Disciple (IVP), he noted how ‘radical’ is derived from the Latin word radix, a root. Originally applied as a political label to people like the 19th-Century politician William Cobbett and their liberal and reformist views, he explained how it came to be applied more generally to those whose opinions went to the roots and who were thoroughgoing in their commitment. In his own commitment to biblical Christianity, Stott unquestionably embodied these qualities. And his radicalism is something that we should recover today if we are to bear God’s saving presence in and for today’s world.

Paul Woolley is the new chief executive of the London Institute for Contemporary Christianity licc.org.uk)

John Stott: What every Christian should know about this unlikely radical

As we approach the centenary of John Stott’s birth, it’s an ideal time to reflect on the global impact of this Anglican priest and theologian

The reaction to John Stott’s death in 2011 at the age of 90 was extraordinary. The news was covered on the BBC, in every UK broadsheet and across the world’s media, including The New York Times. The Archbishop of Canterbury at the time, Rowan Williams, noted that: “The death of John Stott will be mourned by countless Christians throughout the world. During a long life of unsparing service and witness, John won a unique place in the hearts of all who encountered him, whether in person or through his many books.” In a statement, the American evangelist Billy Graham said: “The evangelical world has lost one of its greatest spokesmen, and I have lost one of my closest friends and advisors.”

It was not only in death that Stott’s influence and leadership were recognised. During his lifetime, Church historian and Provost of Southwark, David Edwards, described him, aside from former Archbishop William Temple, as “the most influential clergyman in the Church of England during the 20th century”. In 2005 Time magazine ranked Stott among the 100 most influential people in the world.