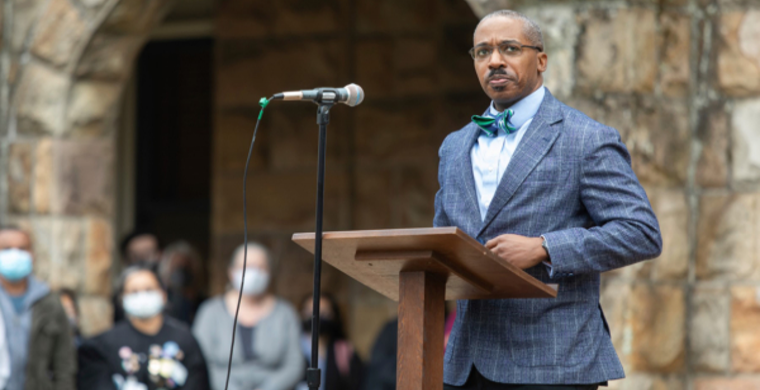 Those of us who sign this letter are united in our care and concern for our alma mater, the University of the South, and of the University’s spiritual home, the Episcopal Church. The catechism in the Book of Common Prayer reminds us that we are created in the image of God “to love, to create, to reason, and to live in harmony with creation and with God.” As such, we firmly repudiate and condemn the racial attacks on the campus over the last nine months, both on Vice-Chancellor Reuben Brigety, and his family and residence, as well as the use of racial slurs against the student athletes from Emmanuel College last weekend.

As leaders on campus and in the Episcopal Church, we must recognize the sins that we are party to as members of those institutions; sins that have been committed over the centuries on the Mountain, in this country, and abroad. We implore all of those also connected to the University and the Church to examine their own lives and how they have played a role allowing those sinful systems to prosper. We especially implore the students who have committed these racist attacks to come forward and admit their wrongdoing to the Vice-Chancellor and accept the consequences he finds appropriate, and we urge those who are aware of the identities of those students to do the same as well, remembering that the Honor Code binds those who sign it not to lie and not to fail to report transgressions against the Code.

Moving forward, we urge the Board of Regents and the Board of Trustees to address these issues swiftly and with more urgency, recognizing that sweeping changes must be made to support people of color already on campus and those yet to come. We reaffirm our support of Dr. Brigety and his fellow administrators in their response to these attacks and the needed healing that must take place over the rest of the semester and into the next academic year. We call on our fellow alumni and supporters to join us in offering up to God a season of prayer and meditation as we consider how we as a dispersed University community can move forward. In this season we must focus on repenting of our own active participation in and silent support of the University and the Church’s sins of racism. As followers of Jesus Christ, we are called to emulate the sober love and commitment to the pursuit of justice that are a natural outcome of the baptism by which we die to the power of sin and are joined to the heart of God. We join our prayers and efforts to all members of the University community who seek to make our beloved Sewanee a place where all can truly dwell together in unity for the first time in the University’s history.

[Episcopal News Service] A group of 63 students and graduates of the University of the South in Sewanee, Tennessee, has issued a statement condemning the recent racial incidents on the campus that have made nation headlines.

The list of alumni and students who signed the statement includes a mix of lay and clergy leaders from across The Episcopal Church. Most have relatively recent ties to the university, though a few names indicate they were part of Sewanee classes from the 1970s and 1980s.

In the most recent incident cited by the statement, a group of Sewanee students was reported to have shouted racist epithets at an opposing men’s lacrosse team during a March 13 match at Sewanee. That incident sparked an investigation by university authorities, condemnation in a letter from the university’s vice-chancellor and a series of student-led anti-racism demonstrations on campus.

The text of the alumni and student group’s statement follows.