On the Roman calendar, June 5th is the feast of St Boniface, Archbishop of the important German see of Mainz, who was martyred on this day in the year 754, around the age of 80, after several decades of missionary activity in western Germany and the Low Countries. The English historian Christopher Dawson once wrote of him that he “had a deeper influence on the history of Europe than any Englishman who has ever lived;” his feast, however, was not added to the general calendar until 1874. This was done in part as Bl. Pius IX’s response to Bismarck’s Kulturkampf, which sought to detach the Catholic Church in Germany from its loyalty to Rome. (je mehr es sich ändert…) Boniface’s first, unsuccessful attempt at preaching the Gospel in Frisia “convinced him that if he was to succeed he must have a direct commission from the Pope; and in 718 he presented himself before St Gregory II in Rome.” (Butler’s Lives). The whole of his subsequent career, included the establishment of the most ancient sees and abbeys of that part of the world, depended on the authority he drew from Rome.

The curious representation of him with a sword on which a book is spiked derives from a tradition concerning his martyrdom. At the moment when he was attacked by a group of pagans, he was reading a book, which he held above his head to keep it from being damaged by their weapons. (In the mid-8th century, any book was by definition an incredibly rare and precious thing.) His relics were taken to the abbey of Fulda, which he and a disciple, St Sturmi, had founded in 741; the abbey also had the book in question, which was venerated as a relic, its cover marked with sword-cuts, and stains believed to be his blood. The same story is represented in a Sacramentary produced at Fulda around the year 1000, now kept at the State Library of Bamberg. 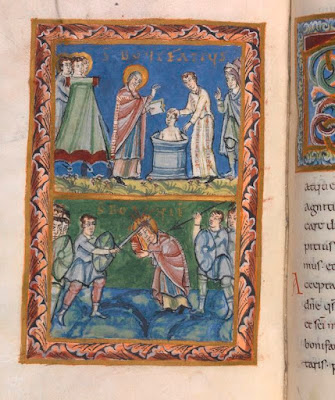