In a recent article in Notitiae, the new Prefect of the Congregation for Divine Worship and the Discipline of the Sacraments, Archbishop Arthur Roche, made the following claim about the textual relationship between the ‘old’ and ‘new’ Missals:

While the Missal retains the basic structure of that of Saint Pius V, together with ninety percent of the texts of that Missal, it removes a number of repetitions and accretions and simplifies the language and the gestures of the liturgy. At the same time, it uses more sacrificial vocabulary than was the case in the 1570 Missal. Opinions to the contrary are false. [1]

I will not deal here with the question of “more sacrificial vocabulary”, as this requires further detailed examination. [2] It is, rather, Archbishop Roche’s claim about the number of prayers from the 1962 Missal used in the post-Vatican II Missal that struck me as odd and, frankly, scarcely believable.
In fairness, the new Prefect is not the only one to make such a claim: no less a figure than Annibale Bugnini wrote that:

The new Missal has eighty-one prefaces and sixteen hundred prayers, or more than twice as many as in the old Missal. Almost all the texts of the old Missal have been used, revised if need be to harmonize them with the reform and the teaching of Vatican II. [3]

This assertion stuck out to me because I have recently finished my project to detail the sources of every postcommunion oration in the 2008 Missale Romanum, [4] and in the course of that work I found that only about a third of those prayers have the older Missale cited as their direct source in the various published lists. It is, however, true that some prayers where the source is given as, e.g., the Gelesianum Vetus or the Leonianum are also contained in the 1962 Missale Romanum. Some centonised prayers, i.e. those that have been composed using parts of two or more pre-existing prayers, also have the older Missal as at least one of their sources. So, to arrive at the most generous and reliable figure possible, some extra work with the source lists and the ever-helpful Corpus orationum [5] was necessary.
With regards to what follows:
So, with all this in mind, are we anywhere near close to “ninety percent” or “almost all” of the prayers from the 1962 Missal being used in the post-Vatican II Missal?
No. We are, in fact, some considerable distance from that figure.
Of the 1,269 unique orations in the usus antiquior, I calculate that 613 (48.3%) of them are used in some way in the post-Vatican II Missal. 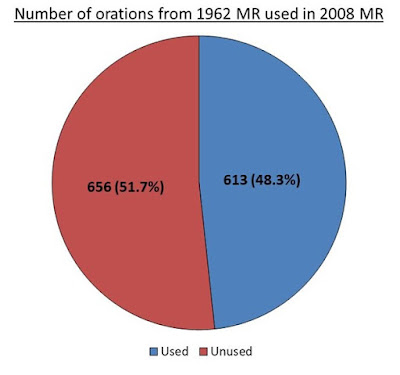 This figure obviously starts to shrink if centonised prayers are excluded, or if a more substantial threshold is established for what constitutes the “use” of an oration. Readers who wish to examine the data in more detail can download the table using the following link:
Table of prayers from the 1962 Missale Romanum used in the post-Vatican II Missale Romanum (PDF)
Put in a slightly different way, and accounting for centonised prayers, 673 (41.9%) out of the 1,606 unique orations in the 2008 Missale Romanum have the older Missal as their source (or one of their sources).
I should reiterate that these figures make no distinction between orations from the 1962 Missal that remain intact in the post-Vatican II Missal and those that were edited before their inclusion. Of the prayers from the 1962 Missal that were not changed [7] by Coetus XVIII bis, one source puts the figure of intact orations at only 17%. [8] It will take some further work to verify this figure, but at first glance it seems about right to me; the number of orations edited by Coetus XVIII bis is surprisingly high. [9]
There are a number of seemingly pervasive myths about the reformed liturgy that, although long since shown to be without any basis in fact, still get bandied about from time to time. For instance, I still hear people say that the reformed lectionary allows ‘the whole Bible to be read in three years at Mass’, something that could only be asserted by people who have never really read the Bible. (When do they think we read the entire book of Proverbs or the entire Jewish Law at Mass, for example?) The claim of Bugnini and Archbishop Roche that “almost all” the prayers of the ‘old’ Missal are used in some way in the ‘new’ one would seem to fall into this same category of myth.
As neither of them provide a citation for their respective figures, I have no idea how this myth came to be. I find it greatly disappointing, however, that the new Prefect of the CDWDS did not bother to check what those of us familiar with both forms of the Roman Rite already knew was a dubious and highly-unlikely figure. Myths and myth-making about the liturgical reform will, ultimately, not serve us well.
NOTES
[1] Arthur Roche, “The Roman Missal of Saint Paul VI: A witness to unchanging faith and uninterrupted tradition”, Notitiae 597 (2020), pp. 248-258, at p. 251, my emphasis.
[2] I will here limit myself to the observation that this is not a question that can be answered with an appeal to raw numbers. If, for instance, the older Missal had 100 out of 1,000 prayers that contained “sacrificial vocabulary”, and the equivalent figure for the newer Missal was 120 out of 1,500 prayers, then although 120 is greater than 100 this would actually end up being a smaller proportion of the whole (8% compared to 10%). In any case, the frequency of such vocabulary and where it is contained in the respective Missals is far more important than the raw numbers.
[3] Annibale Bugnini, The Reform of the Liturgy 1948-1975 (trans. Matthew J. O’Connell; Collegeville, MN: Liturgical Press, 1990), p. 398, my emphasis.
[4] See my book The Post-Communion Prayers in the Ordinary Form of the Roman Rite: Texts and Sources (Lectionary Study Press, 2020).
[5] E. Moeller, J.M. Clément & B.C. ’t Wallant (eds.), Corpus Orationum (CCSL 160-160M; Brepols, 1992-2020, 15 vols.)
[6] It should be noted that Dom Antoine Dumas, one of the members of Coetus XVIII bis, did the same thing when compiling his list of sources. See “Les sources du nouveau Missal Romain (1)”, Notitiae 60 (1971), pp. 37-42, at p. 37: “Par souci de simplicité et de rapidité, on n’a pas indiqué si la source mentionnée était reproduite intégralement dans le nouveau Missal, ou bien – c’est le cas le plus fréquent – dans quelle mesure elle avait été restaurée ou adaptée. Parfois même, il ne s’agit que d’une source lointaine ou d’une citation implicite utilisée pour une composition nouvelle.”
[7] By which I mean textual changes; it should be remembered that although the text of a given oration may have remained the same, where it is used in the post-Vatican II Missal may have been changed by the Consilium.
[8] Anthony Cekada, Work of Human Hands: A Theological Critique of the Mass of Paul VI (Philothea Press, 2010), p. 244.
[9] This is something evident to anyone who has read Lauren Pristas, The Collects of the Roman Missals: A Comparative Study of the Sundays in Proper Seasons before and after the Second Vatican Council (London: Bloomsbury T&T Clark, 2013). See also my recent article “The Eastertide Collects in the Post-Vatican II Missal: A Problematic Reform”.