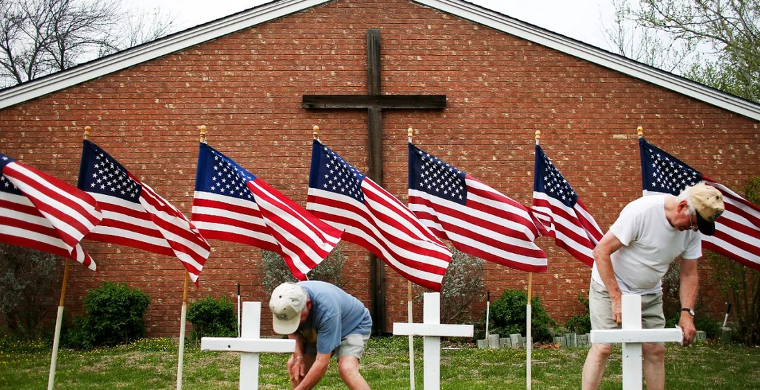 News from abroad pulls us out of ourselves; it forces us to think globally, not just nationally. It also prevents us from getting caught up in rapture theories or dispensational notions of the End Times. It saves us from the endless prophetic nonsense which so-called American prophets proclaim, telling us the world is coming to an end because certain verses in the Bible prophecy that what happens in America will determine how God acts.

It is nonsense of course. A book by a certain Dr. David Jeremiah (the perfect name), Where Do We Go From Here, predicts the world’s end because he has found verses in the Bible revealing America’s woke culture. Jeremiah maintains that unbiblical views on human sexuality clearly indicates the Lord’s return. Throw in Biden on the topic of abortion, and hey, presto, Jesus comes on clouds descending to redeem his (American) saints, especially and presumably including all of Trump’s evangelical followers.

But then there is another group of evangelicals who are hoping for a Second Great Awakening. This hope puts a damper on the Lord’s sudden return to relieve American evangelicals of their alleged suffering and mortgage payments.

It’s a contradictory scenario that has Nones wondering if Christians in America have totally lost their minds and why should we believe any of that crap? One can hardly blame them.

As Anglicans, we think trans nationally, we look at the big picture. Twenty million Nigerian evangelical Anglicans are more concerned with a corrupt government, and the kidnapping and killing of their children and priests by Boko Haram and Fulani tribesmen. They don’t think that the Lord should return to rescue them. They pray, they exhort God for protection and with persecution, their churches just keep growing.

American evangelicals want the Lord to return to rescue them from their “persecution” because the Constitution is being undermined by the woke left.

Consider China. There are thought to be 120 million Christians, mostly evangelical (6 percent Catholic) in that country. Chinese Christians are, in fact greater in number than the Communist party which has around 81 million card carrying members. (In real terms, Chinese Christians will outnumber true American evangelicals within five years or sooner.)

Chinese Christians have no protections from the state. In fact, quite the opposite. Christians are being persecuted, jailed, their buildings torn down, crosses ripped off churches, fishing boats carrying crosses are denied fishing rights, and they carry on and grow.

I have not read a single Chinese Christian writer, even Watchman Nee, suggesting that all this persecution means the Lord is suddenly going to return. They see persecution as part of what it means to be a Christian, that is, suffering as good soldiers of Jesus Christ.

Think Africa. There are an estimated 631 million Christians in Africa, with many facing starvation, violence and death on a daily basis. South Sudan Anglicans constantly face persecution and starvation. The apocalyptic End Times are not on their radar unless it is their own personal end time.

American Christians living in half million-dollar homes bewail the woke left. They urge the Lord to return to rescue them out of all their alleged troubles, when God might, in fact, be laughing at them. God might also be telling them that a coronavirus is another way of saying, “wake up, your time is at hand”. God forbid.

Evangelical Americans don’t believe they should suffer. It’s not in their DNA.

How ironic that Franklin Graham recently admitted that America is not a Christian nation, even though most of its citizens allegedly are. Truth is most of them are nominal Christians, even the evangelicals who more and more identify with Trump are ticking the evangelical box, according to the latest polls. Nominalism might be the biggest curse of American Christianity.

As JI Packer, of blessed memory, once observed, ‘American Christianity is 3,000 miles and one inch deep’. That observation proves only that most evangelicals are evangelicals in name only – EINOs.

What we are seeing in America is the politicization of the gospel that might well undo Christianity in this country. If you align the gospel with either the left or the right, it is no longer the gospel you are proclaiming, but nationalism with a Christian veneer.

American evangelicals need to give it up, or face losing it all to a new dark age that has nothing to do with socialism or communism. The new dark age would be spiritual darkness fueled by materialism, avarice, greed, hate, and fear mongering, with an ‘every man for himself and devil take the hindmost.’ Now that might just look like hell.

One of the great joys of being an evangelical Anglican is that you are forced to think globally when it comes to the faith.

We are inextricably tied to one another across oceans regardless of race and color, united by a creed, Scripture and the Book of Common Prayer.

We may live in America, but not a day goes by that I do not hear what happens to our Anglican brothers and sisters in Nigeria, South Sudan, England, Australia or New Zealand, to name but a few provinces.