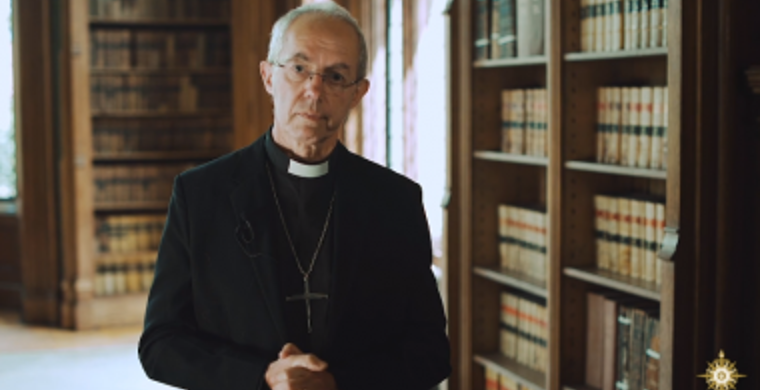 The statement reminded Ghanaian Church leaders of Resolution I:10 of the 1998 Lambeth Conference, which assures LGBT people “that they are loved by God and that all baptised, believing and faithful persons, regardless of sexual orientation, are full members of the Body of Christ.”

Welby said it was his intention to meet soon with leaders of the Anglican Church of Ghana to raise his concerns with them directly and Lambeth Palace confirmed on Friday that this meeting had now taken place.

It was held online on 3 November and joined by the Anglican Archbishop of Ghana, Cyril Kobina Ben-Smith, as well as several Ghanaian bishops and clergy.

During the meeting, they discussed the draft Bill and Welby apologised for failing to speak to them about his own views before issuing his statement.

“I welcomed this conversation, which should have happened before my previous statement. That is not mere diplomacy: Christ commands us to speak directly and prayerfully with our brothers and sisters. I apologised for failing to do so,” said Welby.

“We affirmed that the 1998 Lambeth Conference Resolution 1.10 represents the last and most widely accepted statement by the Anglican Communion on the question of human sexuality.

“We agreed that all human beings are made in God’s image and are worthy of love, respect and dignity, and that the Church of Jesus Christ is called to demonstrate the love of God by protecting all vulnerable people and communities.”

Archbishop Welby ended with a commitment to speak with leaders of the Anglican Church of Ghana before making future statements.

“This was a conversation between equals: I have no authority over the Church of Ghana, nor would I want any,” he said.

“I say that partly because of Britain’s colonial history in Ghana, but also because of the very nature of the Anglican Communion. We are a global family of churches who are autonomous but interdependent: a holy, catholic, apostolic Church bound together by history, sacraments, liturgy, and the love of Jesus Christ for each and every person.

“One of the key conclusions of the meeting is that human dignity is always paramount, and that cultural, social and historical contexts must also be considered and understood.

“I encourage continued good conversation with the Anglican Church of Ghana, with the same courteous but clear and robust conversation as I experienced, ahead of any future public statements.”

VOL: We believe this is possibly the 10th or 11th apology Archbishop Welby has made to date.

The Church Times reported on 27 October how the Archbishop of Canterbury has publicly rebuked the Anglican Church of Ghana for supporting a draft Bill proposing to criminalise LGBT identity and same sex relationships. The Archbishop’s intervention has been followed by a number of Church of England bishops, and a statement which supporters can sign has been set up on the evangelical blog site Psephizo.

Some points to bear in mind in response:

How can we best express our desire to see all people, especially historically despised minorities, treated with justice and dignity?
In making critical statements about our brothers and sisters in different cultures, can we be honest about our motivation: is it genuine concern for the global church, or ‘virtue signalling’ to peers in the West?
As we pray and consider action, we could ask ourselves: do we actually have any relationship with the Church in Ghana? Do we understand the local context? How will they feel about being told what to do by affluent white Europeans, especially those who showed no interest in their country and church before this?
The Church in Ghana has distinguished between those with same sex attraction and those involved in same sex relationships, and has called for an end for “harassment” of LGBT people. In what ways could this positive shift become a basis for engagement in fellowship with the Ghanaian church, building on shared concern for upholding of biblical truth and wholesome family life, standing together against negative impacts of secular Western ideologies, showing compassion and pastoral care for individuals struggling with sexual attraction and gender identity issues?

The Archbishop of Canterbury, Justin Welby, said he should have spoken to Anglican leaders in Ghana before issuing his statement.

The Archbishop of Canterbury has apologised to Anglican leaders in Ghana after publicly criticising their support for a Bill criminalising LGBT relationships without speaking to them first.

Archbishop Justin Welby said in a statement last month that he was “gravely concerned” by the support of the Anglican Church of Ghana for the Bill, which also makes it a crime to advocate for LGBT rights.

Loading...
"Not by might, nor by power, but by my spirit, saith the Lord of hosts." Zechariah 4:6
BEFORE IT'S NEWS ON TELEGRAM
GET THE TELEGRAM APP - https://telegram.org/ JOIN OUR CHANNEL - https://t.me/BeforeitsNews
Read it..
BEFORE IT'S NEWS
SIGN UP FOR OUR NEWSLETTER
Today's Top Stories
Murder? Just Hours After Publishing the Secret of the Vax the Doctor Is Dead (Video)
Lin Wood's Bombshell Secret Recording of General Mike Flynn! Is Q a CIA Psychological Operation? Plus Pegasus Spyware!
Clif High Talks Juan O' Savin, China, Genocide, and Trump! (Video)
Trump Was Inaugurated US President- Currency Reset Started- Gitmo Full- Covid Hoax Variant- Military Law- Real News
Situation Update: Trump Card Ends The Game! Stock Market Crash Looming! Proof The Jabs Aren't Safe! Fake Variant Appears! - We The People News
X22Report - Scavino Message Received! They Have It All! It’s Going To Be Biblical! - Must Video
It's Not Safe To Go Out! Critical Warning From Law Enforcement! New Lockdown Warnings In The USA! - Full Spectrum Survival
The Distractions Are Many! Omicron They Are Begging Their Demon gods to Appear! Pray! - And We Know Must Video
Wow! Hospitals Close Due to Walkouts Following Jab Mandate! -This Is Huge! Via WAM
Disinformation Is Rampant Right Now, Be Mindful! - On The Fringe Must Video
Loading...
Featured
Seal Michael Jaco: Negative ET's Have Been Sent Packing! Are The Days Numbered For The Minions Left Behind In Charge? - Must Video
Markets A Look Ahead: (Anagram) Omicron Equals Moronic! Critical Updates! - Greg Mannarino Must Video
Experts Warn Global Shortages Will Intensify
Trump update 11/28/2021..'If anyone would like a public debate on the facts, not the fiction, please let me know. It will be a ratings bonanza for television'!
Americans Who Wish to Survive This New Era, Have a New Prime Directive! - Dave Hodges Must Read
X22Report - Scavino Message Received! They Have It All! It’s Going To Be Biblical! - Must Video
It's Not Safe To Go Out! Critical Warning From Law Enforcement! New Lockdown Warnings In The USA! - Full Spectrum Survival
A Secret Hidden Message Has Now Been Discovered! I Cannot Believe That Nobody Saw This In 2014! FL Maquis
New Clif High: Roux Woo - Explorers' Guide to SciFi World
Hollywood Military Complex Programming! They Parasite Our Infinite Power By Inverting It! - McAllister TV
Loading...
Top Global
Palestinian/Israeli update 11/28/2021..Israel bans entry to all foreigners as world races to stem Omicron spread
Global Tyranny is here, says mRNA inventor Dr. Robert Malone
Protesters in Holland Tear Down 5G Transmitter. 5G is a Kill Grid. 5G weapons Expert Mark Steele Gives Warning. 5G Hidden in LED Street Lights
Australian Concentration Camp Food Reported To Be "Pretty Good".
Australia Protest – Over 1 Million People Turn Up – Breathtaking – Tide’s A Turning
Persian Gulf update 11/27/2021.. "Riyadh intensifying air raids on civilians"
New Variant Hysteria Comes From Same Institution That Popularized Lockdowns & Previous COVID Scares
Gene Decode and Michael Jaco: Updates and Secrets Exposed (Video)
Watch: Heavily Armed German Police Raid Crowded Cafe Over "Covid Rule Violations" +Must Video
Horrifying Compilation of Athletes, Reporters & Patients Collapsing, Passing Out & Fainting, Vaccine to Blame? (Must See Video)
Top Alternative
UK Funeral Director: Excess Deaths Occurred After The Jab! Rare Smallpox Exercise Video "Atlantic Storm". Ticking Time Bomb: Bioweapons Injections Are Destroying The Immune System. Proof You Are Owned & Patented After The Shot! (Must Videos)
Revelation 8.8: Watch How JFK, JFK Jr., Travis Scott, La Palma and the 'Variant of Concern' Omicron All Connect in One Video
Seattle Washington’s Historical Ufo Sightings
HRC Says We Are At The Precipice - OMICRON = MORONIC - Here Comes MONKEYPOX
Bombshell Interview: A Medical Doctor Blows the Roof Off of Everything! Gregory Mannarino and Dr. Harding
There Is No Logical Explanation for This Mysterious Behavior That is Occurring Again! MrMBB333
New York Nadia – The Ghislaine Maxwell Trial: MEDIA SILENCE
A New Coronavirus Variant Is Spreading in New York, Researchers Report
“Red Friday” Begins Countdown To “The Day The World Ended”
Mordant Realities In The Nwo Agenda: With Skill & Focus, We Can Defeat Them