Denis Crouan, the French founder and president (since 1988 or so) of the organization Pro liturgia, which promotes “the Mass as Vatican II truly intended it”, with Latin, chant, ad orientem, etc., has declared such efforts to be a “waste of time”, and thrown in the towel. The following article is his Final Message on the site, although he states that its activities will continue in a different form on another site. NLM is very grateful to an old and dear friend for providing this translation. Caveat lector: the reproduction of this text does not imply agreement on the part of anyone associated with NLM with everything that is stated herein. Below is a video in French in which Mr Crouan explains in greater detail his decision to end the activities of Pro liturgia.

Asking present-day clergy to respect the liturgy of the Church is a waste of time: with an obstinacy often coupled with a profound lack of culture, those who occupy the places from which they are supposed to teach, go before, and lead the faithful – at all levels in the Church, from the pope to the simple parish priest – seem to want to systematically sabotage divine worship in a way that remains completely incomprehensible.

We must separate ourselves from a clergy that for years has been trying to dream up, with inexplicable perseverance, liturgical celebrations that only bring together the naive, unthinking conformists who place their need for conviviality and sentimentality above any preoccupation with the truths of faith and liturgical sense, to the point of forgetting them, or even denying them, and depriving those who need them.

We must leave behind a clergy and churchgoers who find their attitudes encouraged and shared by bishops who stray into biased readings of magisterial texts (as evidenced by their ways of reading and applying both the Second Vatican Council and Pope Francis’ Motu proprio “Traditionis custodes”).
Let those who wish to go on making friendship bracelets, filling in coloring books, and singing inanities at Masses that alternate between kitschiness and faddishness do so with complete freedom: they will not transmit anything to the future generations.
Let those who wish to cling to stiff chasubles or to lace albs, the hallmarks of falsely “traditional” celebrations, do so if they find it to their liking: these days, every way of celebrating the liturgy is to be considered acceptable.
Let our bishops who want to be the heralds of a rootless pastoral ministry that has never produced anything do so, if it gives them the feeling of being up to their mission: the extravagances of which they are capable and which no longer surprise are not yet exhausted.
That Pope Bergoglio is more interested in Luther and Pachamama than in the doctrine and morals of the Church is his choice: a choice that everyone is entitled to consider regrettable and more than risky.
In any case, all of this, this way in which the Church and its liturgy present themselves, is no longer of any interest to the simple faithful who want to escape the betrayals of a clergy that wallows in the management of empty parishes where only “committed laymen” swarm and claim to “animate” liturgies that are, at best, lukewarm soups swallowed out of a spirit of sacrifice, and, at worst, poisons for inner peace and psychological balance.
Granted, there do remain harbors of peace, such as the monasteries that have resisted the winds of modernism and have received and applied Vatican II with faith and intelligence. But a monastery, though it may be an occasional place of refreshment, is not the parish sanctuary that the lay faithful should normally frequent, and where they ought to be sure that they can live out and feed their faith in silence and contemplation.
In order to get away from this ecclesial situation, which has become delirious and toxic to the point of harming inner peace and the Catholic faith, it has been decided to put an end to the “adventure” of Pro Liturgia. The current situation has no future and is kept up by a partly unstable clergy and laity that have accepted to be so disoriented that they no longer question what they are made to do during the Mass. As such, this situation demands such a decision of us. 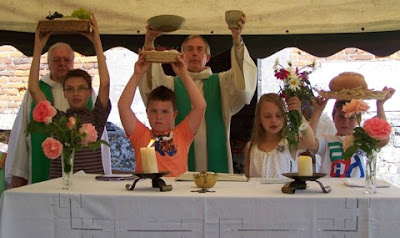 The watchword of our bishops is that Masses should be entrusted neither to “traditionalists” nor to the faithful who respect the decisions of Vatican II on liturgy, but only to those who abuse divine worship. Therefore, to try to have a conversation with these mitred pastors, with their impenetrable way of thinking, is a waste of time (and sometimes even of faith).