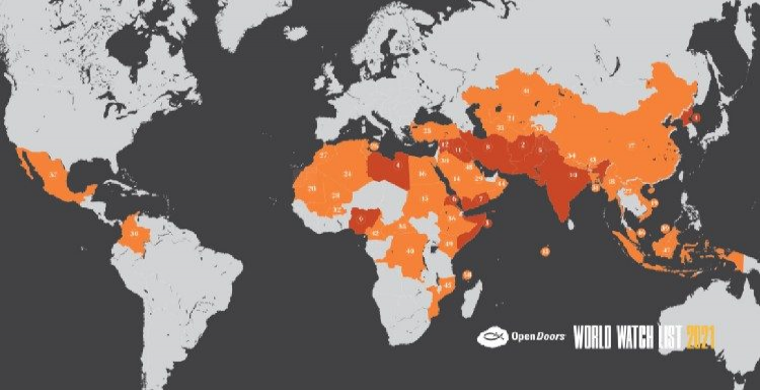 On January 19 the non-denominational organization based in the Netherlands presented its 2022 World Watch List (WWL) which ranks the top 50 countries where Christians experience the worst persecution for their faith. The survey, covering a period from 1 October 2020 to 30 September 2021, shows that persecution continues to rise especially in Asian and African countries and that the COVID 19 pandemic has further exacerbated discrimination.

In the new report, Afghanistan ranks first as the most dangerous country for Christians, since the Taliban takeover in August 2021, overtaking North Korea. However, the situation of religious freedom under the Pyongyang regime of Kim Jong-Un has continued to worsen in the period examined and the Far East country is second in the list after ranking first for 20 years.

Four out of the first five countries recording the highest rate of anti-Christian violence are Islamic States where both political unrest and religious extremism have grown. Apart from Afghanistan, they include Somalia (3), Libia (4) and Yemen (5). They are followed by Eritrea, Nigeria, Pakistan, Iran, India, Saudi Arabia, Myanmar, Sudan, Iraq and Syria.

Anti-Christian violence is still growing in Sub-Sahara Africa, notably in tthe Sahel region (Niger, Burkina Faso and Mali) and in Nigeria, which after entering the top ten in 2020 at number 9, has gone up to number 7 and is confirmed as the nation with the highest number of Christians killed for their faith (4.650). Violence is due mainly to armed Fulani herdsmen laying waste to several Christian villages, as well as to the Islamist Boko Haram group and a range of criminal groups who continue to kill, kidnap and rape.

Pakistan ranks second for anti-Christian violence, but attacks against Christians are also still growing significantly in neighbouring India, fuelled, in this case, by Hindu nationalists, as confirmed by other recent reports.

Covid-19 has also legitimized increased surveillance and restrictions by authoritarian governments in countries, using the need to contain the pandemic to increase their control over Christian communities.

One of the consequences of religious violence against Christians is forced displacement. Many of the some 84 million internally displaced people and of the 26 million refugees recorded in 2021, were Christians fleeing Islamist violence in the Sahel region, Nigeria and other African nations. Also in countries like Myanmar the military crackdown in Christian-majority Chin State and Kachin, Kayah, Shan States has displaced 200,000 Christians and forced some 20,000 to flee the country.

Open Doors has also attempted to find out more about violence against women connected with their Christian faith. Collecting exact data on the phenomenon is difficult, as many women are reluctant to speak out for cultural and social reasons. However, the organization has been able to ascertain 3,100 cases and 1,500 forced marriages in 2021. Further details on this aspect of religious persecution will be given in another report to be published in February.

Persecution against Christians on the rise worldwide

The 2022 World Watch List (WWL) released on Wednesday by Open Doors International shows that persecution against Christians continues to rise especially in Asian and African countries and that the COVID 19 pandemic has further exacerbated discrimination.

2021 recorded a new significant increase of persecutions against Christians across the world, according to a new report released by Open Doors International, which for over 60 years has been supporting persecuted Christians worldwide.