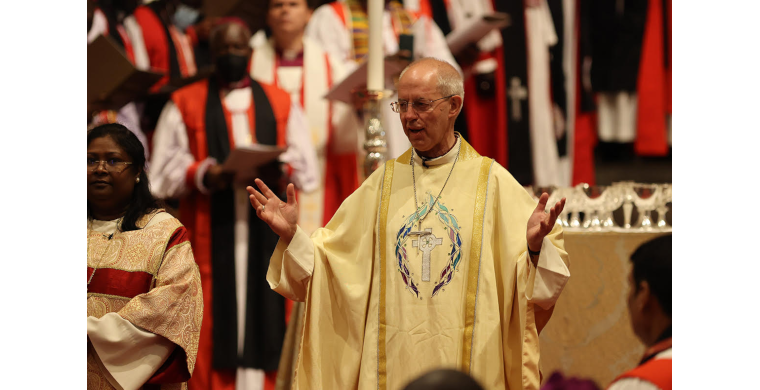 In some ways, the Anglican approach to human identity and sexuality has already been solved by previous Lambeth Conferences. There is no reason to keep trying to visit and revisit the issue.

Lambeth 1888 produced a definitive document — the Chicago-Lambeth Quadrilateral — a four-point articulation of Anglican identity, encapsulating the basic fundamentals of Anglican doctrine and securing the fact that 1) the Holy Scriptures contain all things necessary for salvation; 2) the Apostles’ and Nicene creeds are the sufficient statements of Christian faith; 3) defining Baptism and Holy Communion as the two Sacraments instituted by Christ; and 4) the embracing of the historic episcopate while continuing in the line of Apostolic Succession.

Then in 1998, Lambeth 1:10 was released cementing three things about Christian sexual activity.

1: Marriage is between a man and a woman until death;

2: Homosexual practice is rejected as incompatible with Scripture; and

3): The legitimizing or blessing of same-sex unions is ill advised as is the ordination of those involved in same-gender relationships

Historically, the Anglican Formularies — the Book of Common Prayer, the 1662 Ordinal, and the Thirty-Nine Articles of Religion — have also pointed the way toward authentic Anglican belief and practice.

The Anglican Communion is crying for leadership. That is one of the weaknesses of Anglicanism — no one is in charge. It’s every Province and diocese for itself with no real basic consensus of Biblical truth. A bishop is King (or Queen) in his own diocese.

There is an overall attitude of “I can do what I want to do and you can’t stop me”, since each Province is independent and autonomous. The interdependent aspect of the Communion is not followed. The Windsor Report failed. The Anglican Covenant never got traction.

It’s time for the Archbishop Canterbury to provide that needed spiritual leadership. He may be the “primus inter pares” — first among equals — but his office is one of the four Instruments of Communion, and as such he has a leadership role. Right now, the Anglican bishops of the world are gathered in communion with him at Lambeth while the rest of the Anglican world turns its collective eyes to Canterbury to witness what is unfolding live over Twitter and Facebook and Zoom and YouTube.

It’s time for Welby to step up into that leadership role and be the true Spiritual Father of the Anglican Communion. Inherently, there are three primary roles a father plays within the family. He is the protector, the provider, and the disciplinarian.

The Anglican Communion needs the disciplinarian. The bishops are at each other’s throats and the Archbishop of Canterbury has taken a let’s-wait-and-see-what-happens attitude. He does not want to get involved because he does not want to step on toes. Welby does not want to feel that he is overstepping his authority, and he certainly does not like conflict.

But Welby cannot stay on the fence. He cannot continue to try and placate both sides. The two sides have irreconcilable differences based upon the teachings of Scripture, the Chicago-Lambeth Quadrilateral, the Anglican formularies, and Richard Hooker’s Three-legged Stool of Faith — Scripture, Tradition and Reason.

The Bible is the written Word of God, and Jesus is the Word of God Incarnate.

SCRIPTURE: Both the Old and New Testaments are clear about essential sexual mores.

And St. Paul has something to say on the subject. “For this reason, God gave them up to dishonorable passions. For their women exchanged natural relations for those that are contrary to nature; and the men likewise gave up natural relations with women and were consumed with passion for one another, men committing shameless acts with men … (Romans 1:26-27)

“Now we know that the law is good, if any one uses it lawfully, understanding this, that the law is not laid down for the just but for the lawless and disobedient, for the ungodly and sinners, for the unholy and profane, for murderers of fathers and murderers of mothers, for manslayers, immoral persons, sodomites, kidnapers, liars, perjurers, and whatever else is contrary to sound doctrine …” (I Timothy 1:8-10)

TRADITION: Traditional marriage is the foundation of the nuclear family, and the family is the bedrock of society. It is in the traditional family setting that the loving husband and his wife jointly provide their children with the greatest opportunity for their stability and support as they grow into functioning adults. Their children have a greater chance of completing their education and leading a successful life, and a lesser chance of encounters with the law and failure.

Justin Welby cannot just stand by while the souls of some of his bishops are in peril. As a good father, a strong spiritual father, he must step in and protect them just as a loving Dad would protect his toddler from running into a busy street.

The Anglican Communion’s spiritual father has to grab the bull by the horns and tell the bullying bishops “No! Enough is enough, you will not continue to tear the Communion asunder.”

The Archbishop of Canterbury has all the spiritual tools he needs to exercise spiritual fatherhood within the Anglican Communion. He has the Chicago-Lambeth Quadrilateral, Lambeth 1:10, the Anglican Formularies, the Three-legged Stool of Faith, and the Deposit of Faith once delivered unto the Saints. (Jude 3)

In addition, he would have the backing of the Global South Fellowship of Anglican Churches bishops and GAFCON bishops who make up a good 75% of the Anglican Communion. Those bishops are seeking that Lambeth 1:10 be the go to gold standard of sexual morality across the Anglican Communion, particularly involving their brother and sister Lambeth bishops.

Yes, the troubling on-going homosexual issue, now dubbed the Lambeth Call on Human Dignity, can be solved at Lambeth 2022. It just takes Justin Welby deciding to stop waffling on the issue and become strong and affirmative, even assertive, in dealing with those who are living a life against what Scripture teaches and what Lambeth 1:10 affirms.

The six-pack of gay and lesbian bishops, all from north of the equator — the United States, Canada and Wales — are acting like spoiled children. They want no restrictions on their behavior, no matter how destructive it is, and they want everyone else to accept them in their reprehensible state of being. They have already proved that when they pushed to have full discussion on Lambeth 1:10 initially deleted from the Lambeth Calls. They brought their bed partners along with them to England, only to complain that they are not being accorded the same rights and privileges of the traditionally married heterosexual bishops over the “politics of sleeping arrangements.”

They use intimidation and bullying; Justin Welby, who dislikes conflict, is trying so hard to keep things together that he is willing to go along just to get along. This is not leadership. Authentic leadership would be standing up and saying “No, you cannot come to Lambeth because you are not living a life which is incompatible with Scripture as outlined in Lambeth 1:10 which has been a part Anglican teaching on biblical sexuality since 1998.”

Twice in Leviticus, homosexual activity is called an abomination to the Lord. An abomination is something which God sees as exceptionally loathsome, hateful, sinful, wicked, or vile.

But to keep the lesbian and gay bishops at bay would have resulted in hurt feelings and ruffled feathers, so ultimately the Archbishop of Canterbury did not want to offend them.

Was not God offended? Is it not God — and not man or woman, even if they be a bishop — you do not want to offend?

Religion is designed to render due worship and obedience unto God. That’s why the grand cathedrals which last for a thousand years and the beautiful liturgies stir the soul.

James defined pure religion thusly: “Religion that is pure and undefiled before God the Father is this: to visit orphans and widows in their affliction, and to keep oneself unstained from the world.” (James 1:27)

Trying to get the Anglican bishops on the same page when it comes to theological agreement is like trying to herd cats.

“The Anglican Communion has never been anything but a loosely knit fellowship of churches identified either by their nation or their ethnicity,” explains Mary Glasspool (New York assistant), the first lesbian to join the Episcopal House of Bishops.

However, Nick Edmonds, the deputy head of news for the CofE Communications Team describes the Anglican Communion as the third largest Christian denomination in the world, comprised of 43 independent yet interdependent provinces spanning more than 165 countries. It is not a federated or councillor association, but a family with adopted practice and customs.

The Archbishop of Canterbury calls the Anglican Communion a “messy family.” Lambeth Conference is pushing hard to pass the family ideology: “We are family, worts and all. Family members love and accept other family members no matter what situation they find themselves in.”

Edmonds says that the Lambeth Conference is “family business” with an outward focus on how the Communion serves the diverse and varied context and challenges of the day.

Bishop William Wantland (IV Eau Claire) one time said: “The Anglican Communion may be the third largest Christian denomination in the world but we ain’t much,” meaning that the size of the Communion at 90 to 100 million Anglicans pales next to the 1.3 billion Catholics and 222 million Orthodox believers. Now, the majority of Anglicans live in the Global South.

Mary Ann Mueller is a journalist living in Texas. She is a regular contributor to VirtueOnline

“Those questions, especially on the Christian and Anglican approach to human identity and sexuality, will not be solved at this Conference,” the Archbishop of Canterbury proclaimed in his opening address at Lambeth 2022.

Oh, but he is wrong!