Thanks to our founding editor Shawn Tribe for finding these historical gems, which he first posted yesterday on the Facebook group Contra Traditionis Custodes. These three editorial cartoons from the 1960s perfectly sum up the rapid degeneration of the original naivety about the state of both the Church and the world that led to the calling of the most recent ecumenical council.

1964: At the opening of the council, St John XXIII spoke of “… people (who) see only ruin and calamity in the present conditions of human society. They keep repeating that our times, if compared to past centuries, have been getting worse,” and stated his disagreement with the “prophets of doom who are always forecasting disaster.” Two years later, before the Church discovered (among the many fascinating new ecclesiological insights of that era) that She stands as an equal to mankind, and not as its Mater et Magistra (how rapidly things change!), the Council could still paternalistically put its arm around Mankind’s shoulder and show it the dawn of A Better Tomorrow. How ironic that they are facing East, given that among the many absurd innovations introduced with no warrant from the council itself, ad orientem worship should be so suddenly and unjustifiably eclipsed! 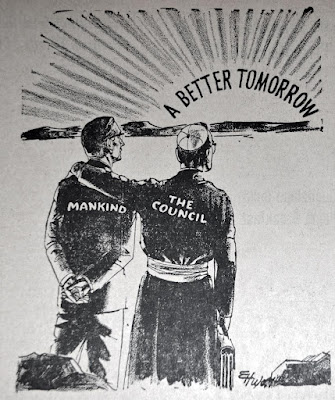 1966: Two years later, with the Council now closed, and the pace of change rapidly accelerating in the Church, there could hardly but be misgivings about whether these changes were really going to produce the renewal which the opening paragraphs of Sacrosanctum Concilium state that the Council was hoping for. (Spoiler alert: they weren’t.) It is particularly ironic that the Pope here bears almost no resemblance to Paul VI, as if the cartoonist, perhaps unconsciously, realized that the actual Pope was about to shout “Geronimo!” and enthusiastically jump down the precipice on his left. 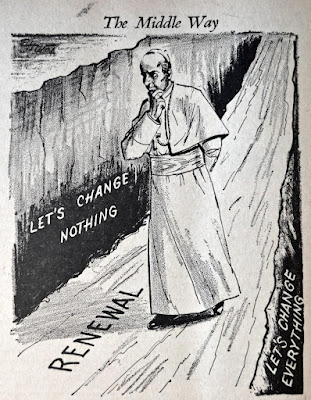 1967: The fact has become too obvious to ignore that the Barque of the Church is shipping in some very rough seas, but, as is so often the case with ideologies, a course correction has been deemed unthinkable. The cartoonist therefore simply declares that It’ll Make Port, as if his saying could make it, and obviating any need to ask difficult questions like “in what condition?” or “with how many of the passengers still on board?” 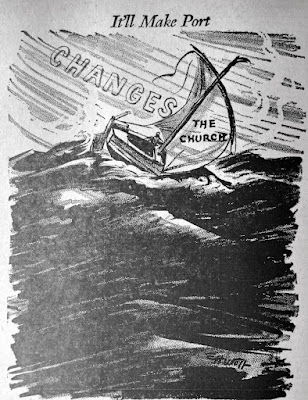