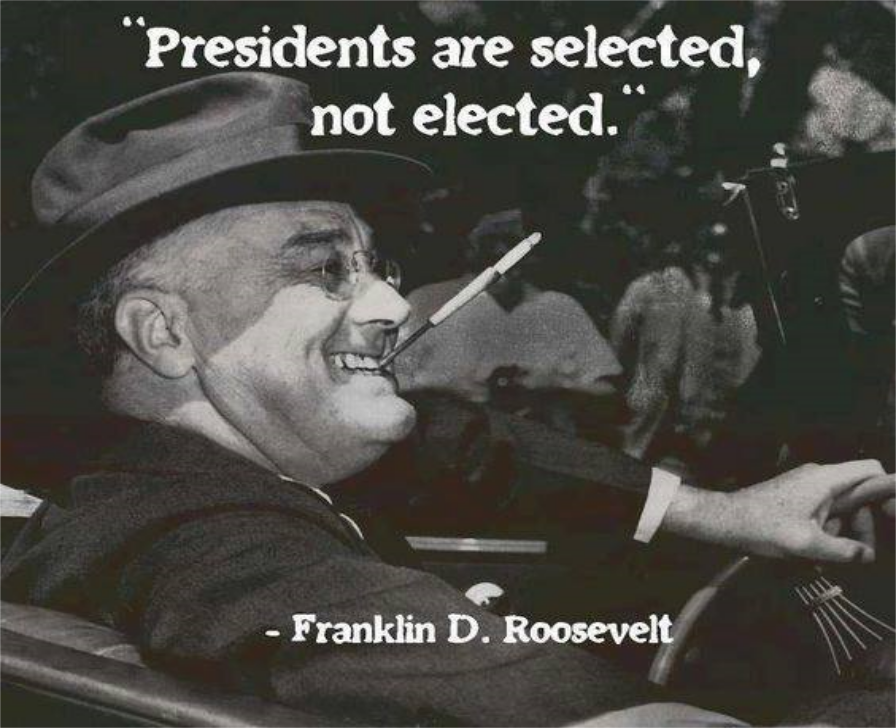 FDR knew this, but how many of you understand this?

It’s okay for a president to come out and tell you the game is rigged, but if someone like myself tried to tell you…. “oh, you’re a conspiracy nut”…. “my vote still matters”.

All your vote did was make you morally culpable for the atrocities being carried out in your name.

The president is nothing but a puppet on the throne for those who are really in power. Do you think maybe FDR knew a thing or two about this?

Even a brief view into history reveals the parasitic manner in which the ruling class has infiltrated the US government to ensure that their status quo will remain. Their NWO plan will continue to unfold regardless of who the president is.

The lie is in thinking it makes a difference whether it was Bernie, Hillary or Trump.

The following quotes are all from presidents, vice presidents, and the great historian Carroll Quigley who were telling us about this hidden hand. It’s not like this information is hidden. It’s right out in the open. They think that the American people are so dumbed down and brainwashed that they won’t figure it out. Again, even a brief study of politics and banking in the American 19th and 20th century alone would reveal how this works.

“A great industrial nation is controlled by its system of credit. Our system of credit is privately concentrated. The growth of the nation, therefore, and all our activities are in the hands of a few men… [W]e have come to be one of the worst ruled, one of the most completely controlled and dominated, governments in the civilized world—no longer a government by free opinion, no longer a government by conviction and the vote of the majority, but a government by the opinion and the duress of small groups of dominant men.” – Woodrow Wilson, 28th President of the United States, The New Freedom, 1913

“The real truth of the matter is, as you and I know, that a financial element in the large centers has owned the government ever since the days of Andrew Jackson.” — Franklin Delano Roosevelt, 32nd President of the United States (1933–1945), in a letter to Colonel Edward M House dated November 21, 1933, as quoted in F.D.R.: His Personal Letters, 1928-1945.

“Since I entered politics, I have chiefly had men’s views confided to me privately. Some of the biggest men in the United States, in the field of commerce and manufacture, are afraid of something. They know that there is a power somewhere so organized, so subtle, so watchful, so interlocked, so complete, so pervasive, that they had better not speak above their breath when they speak in condemnation of it.” – Woodrow Wilson, 28th President of the United States, The New Freedom, 1913

“The individual is handicapped by coming face-to-face with a conspiracy so monstrous he cannot believe it exists. The American mind simply has not come to a realization of the evil which has been introduced into our midst. It rejects even the assumption that human creatures could espouse a philosophy which must ultimately destroy all that is good and decent.” —J. Edgar Hoover, The Elks Magazine, 1956

“A power has risen up in the government greater than the people themselves, consisting of many and various powerful interests, combined in one mass, and held together by the cohesive power of the vast surplus in banks.” – John C. Calhoun, Vice President (1825-1832) and U.S. Senator, from a speech given on May 27, 1836 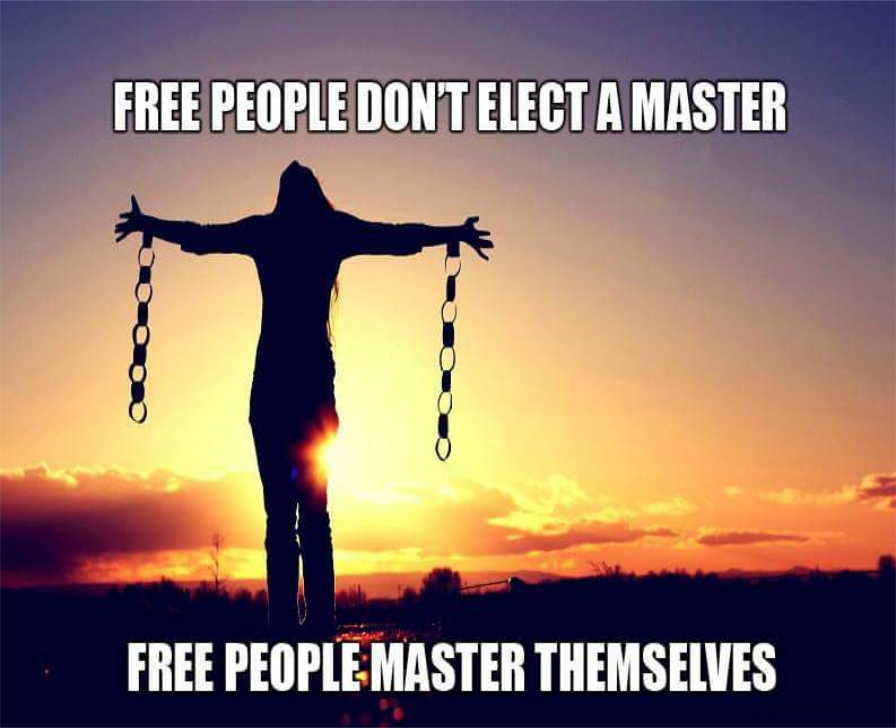 The argument that the two parties should represent opposed ideals and policies… is a foolish idea. Instead, the two parties should be almost identical, so that the American people can throw the rascals out at any election without leading to any profound or extensive shifts in policy. Then it should be possible to replace it, every four years if necessary, by the other party which will be none of these things but will still pursue, with new vigor, approximately the same basic policies.”

“The powers of financial capitalism had a far-reaching aim, nothing less than to create a world system of financial control in private hands able to dominate the political system of each country and the economy of the world as a whole. This system was to be controlled in a feudalist fashion by the central banks of the world acting in concert by secret agreements arrived at in frequent private meetings and conferences.” 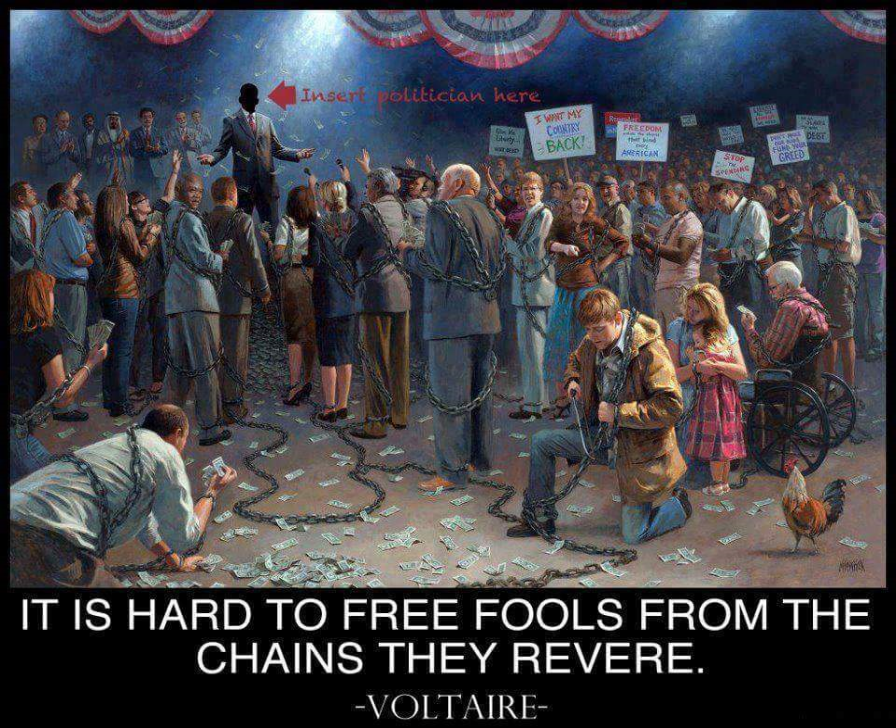 Just look at the last 20 years. We’ve had both parties taking turns driving the debt up to 20 trillion, starting wars all over the world, and pushing the country more and more into globalism. Does it really seem like these two parties we’ve supposedly been given choice between are not driving the U.S in the same direction?

Nobel Peace prize winning Barack Obomber though the “proxy war” was responsible for the largest U.S military budget since the WWII. In 2016 the U.S dropped an average of

72 bombs per day. That would be 3 per hour for this peaceful, anti-war president.

Furthermore, look at the 2004 presidential selection for example. We had the republican George W. Bush and the democrat John Kerry. These two men being the absolute best of the best when it comes to qualifications for running the United States Inc slave plantation, right?

Unknown to most voting Americans is what else Bush and Kerry have in common besides running for president in 2004. They are both members of Yale’s secret society Skull and Bones. A secret society who’s members often go on to head high positions in governmental office or “think tank” organizations and other influential organization. Here is a few examples:

Bush And Kerry seem to think it was funny that the American voters didn’t need to know about this. Check out these snipets from interviews pre-election:

A secret society, with secret oaths… This presents a problem when you take new oaths as president, does it not? What if these secret oaths come in conflict with the presidential oaths?

There’s 325 million of us and the best the nation had to offer was these two fraternity brothers at Yale?

Mathematically these odds would be ridiculously high and the MSM obviously didn’t cover it. If they did it was quickly dismissed as a side note when in reality the headlines in the news should have ran, “Fraternity Brothers at Yale Run for President!”. Not to mention that the fraternity was Skull and Bones!

Now we have an alternative though, right? Good old “Make America Great Again” is going to “drain the swamp”, hooray!

Sadly, some people fell for this propaganda. All I’ve seen is Mr. Trump backing his massive dump truck up to the swamp and filling it with the most vile, slime covered, Golman Sucks, scum of the earth swamp creatures that we’ve seen with other puppets before him and more. He bows down to kiss the hand of Rothschild’s by supporting Israel and not only continuing, but seemingly escalating things in the middle east. The Project For The New American Century is carried forward just as it was before.

The “right wing” and the “left wing” are two wings attached to the same bird. The “New World Order” agenda of global domination and control marches on regardless of which puppet the slaves select to be their next master.