This was published 10 years ago

A SLIGHT woman with short brown hair, an Australian or Kiwi accent and a resemblance to the pop star Victoria Beckham, is the focus of a renewed global hunt for Madeleine McCann, the little girl who went missing from a Portuguese holiday resort two years ago.

The search, which has cost British police close to $1.5 million, has shifted suddenly to Australia following new information provided to investigators by two British men. 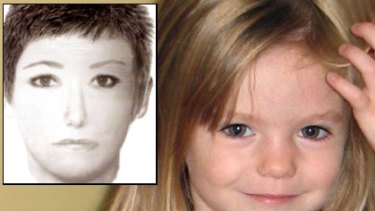 Missing toddler Madeleine McCann, inset an identikit of a woman who is the focus of a renewed global hunt.

It is understood that the woman they are looking for spoke to the men outside a bar near a Barcelona marina well after midnight on May 7, about three days after Madeleine went missing from a holiday apartment in the seaside resort of Praia da Luz.

The popular marina, about half a day’s drive away from the Praia de Luz resort, is frequented by tourists as well as locals and the woman was noticed because she appeared nervy and had been pacing as if waiting for somebody.

While investigators do not believe the woman, thought to be in her 30s, is a suspect in the case, they do believe what she told the British man could be “potentially significant” to their investigation.

A sketch of the woman, based on the British man’s description, was released in London on Thursday as investigators launched an appeal for the woman or anyone who thinks they might know her to come forward.

The former policeman who is heading the McCanns’ search for their daughter, Dave Edgar, said while he did not want to reveal details of the conversation the woman had with the British man in the area of the El Ray De La Gamba bar at the Port Olimpic Marina, he believed she had an Australian accent.

“It’s a strong lead. It was a significant conversation,” Edgar told reporters.

“We obviously want to track this individual and speak to them.“She is a significant individual. I wouldn’t describe her as a suspect.”

One British witness is understood to have had a quick chat with her when she seemed to think he was a person she was due to meet.

This conversation, say the McCann team, was potentially significant to the investigation. However, they will not divulge any details of what was said.

The woman then apparently went to sit down in another spot and was noticed again by a different group and it was noted that she spoke fluent Spanish too.

Witnesses described the woman as a “bit of a Victoria Beckham look alike”, the McCann team said last night.

The private detectives who have worked for the family since Madeleine disappeared in May 2007 were to hold a press conference last night Australian time to release an identikit and artist’s portrait of the woman.

Based on the witness’s memories, the woman was believed to be between 30 and 35 years old, of slim build, small and with brown hair cut quite short.

The former BBC journalist, Clarence Mitchell, who helped the McCann’s restore their reputations after the Portuguese police wrongly declared them formal suspects, has managed release of the information.

The woman is described as being about 157.5 cm tall tall and was wearing well cut blue jeans and a light coloured top.

Australian Rob Comer, who runs private investigation firm, International Missing Persons Tracker, was pessimistic about the McCann’s chances of tracking the woman down when to told of the small information investigators had about the woman.

A vague description, no name and no photo was not enough, he said.

“On that alone, it would be pointless to search for her, the only way to flush that person out will be through the media,” Mr Cormer said.

The new lead is being considered very seriously by the McCanns and their team despite reported skepticism from British as well as Australian investigators.

The little girl would be six now and her parents’ desperate hunt for her has harnessed the support of high profile and millionaire donors all over the world although the case is not active in Portugal.

The Find Maddie website states: “It is now more than two years since Madeleine was taken from us – more than two years since we saw and held our beautiful daughter, since Sean and Amelie played with their big sister, since we were a happy family of five. Without doubt, two years seems a huge proportion of your life when you’re six years old, but in reality it is just a tiny fraction of the life which lies ahead of you. It is important for us to keep looking forward