These two emotions are twins, with fear being the firstborn and hatred eventually becoming the larger, evil twin.

It is impossible for you to hate what you do not already fear.

Bigotry is hatred, and like all hatred, bigotry is caused by fear. If you hate blacks, browns, yellows, or reds, it is because you fear them. It is your fear that enables your bigotry.

When you hate, you wish to harm the thing you fear. You stomp on a spider, but not on a butterfly. You fear the spider; you don’t fear the butterfly.

Often, you yourself cannot stomp on that spider, so you enlist a proxy to do your stomping. The Ku Klux Klan was formed to provide harm to the feared and hated blacks. For millions of bigots, the KKK provided the proxy, doing the harm the bigots could not or would not do themselves.

Hitler promoted the “danger” of Jews and Gypsies being traitors who polluted the Arian gene pool. Germans were taught fear, which progressed to hatred, against which no amount of logic, reason, or facts could prevail.

The result was mindless hatred. No amount of “stomping,” even a horrifying death camp for innocent men, women, and children, could erase the fear. Only total eradication — the “final solution” — could ease the distress of the haters.

Hitler was the proxy, who claimed he was the “only” one who could save the fearful Germans. 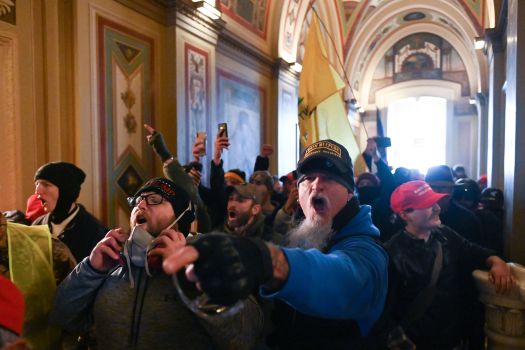 Bullying is another symptom of fear. The bully is afraid the world will see his/her shortcomings, so he seeks to express dominance. The bully tries to distance himself from those who are weaker, thinking that will make him look strong.

Bullying is encouraged by mobs of people doing what they don’t have the courage to do alone.

All those with a dictatorial bent — including the Donald Trumps of the world — are aware of the relationship between fear and hatred and the public’s wish to have a proxy do harm to those who are feared.

And he told you he was the “only” one who could save you.

Trump manipulated your emotions first by making you afraid, then by stoking your hatred, then by offering himself as your proxy for harming those he has trained you to fear and hate.

Fear and hatred are such powerful emotions, they override logic and reason. Trump’s followers know he is a liar, a bully, a thief, and an incompetent. They know intellectually, he is one of the worst human beings ever to fall into the Presidency.

Those who are educated in psychology know Trump is a psychopath.

But his followers forgave him for everything because he promised them protection from what they fear and punishment to those they hate.

That fear-to-hatred path is what drives cults. Leaders of cults warn their followers about the dangers of the “outside” world, then claim that only they, the leaders, can protect the followers from those dangers, thereby generating absolute allegiance and obedience to the cult.

Breaking the hatred and unholy bond to the leader requires allaying the fear.  Simple facts won’t do it; they are dismissed as “lies” by outsiders, and often serve as reinforcement of the leader’s warnings.

In short, it is a two-path journey.

On one path, the hater must be taught to look inward and to say to himself, “I am better than this. I am stronger than this. I safely can give these people my compassion.”

On the other path, the hater must be taught to look outward, at the object(s) of his hatred and say, “I do not fear them. They are people, just like me, and like me, they have hopes and loves and fears. They want the same kinds of things I want, and if I can get to know them better, we will find common ground.”

The most common fear-modulating device is called “exposure therapy,” which means what it sounds like. Graduated increases in exposure to the objects of your fear will reduce the fear which will reduce the hatred.

Example: Afraid of spiders? First, get a toy spider to play with. Then observe a real spider in a bottle. Then observe the spider on a table but trapped in a mesh cage.

Exposure therapy is difficult with humans. Even if you put a dozen black-fearing whites into a room together with a dozen white-fearing blacks, the two groups will tend to separate into”us” vs. “them.” Quite possibly, their fear and hatred will grow.

You see that effect in high schools and in prison populations.

There isn’t one basic cause of hatred-inducing fear. Every group is feared for something(s) different. For instance, blacks probably are feared most for crime. So, perhaps, the best cure for anti-black bigotry is to eliminate the anti-black fear by eliminating poverty.

Poverty is the single best predictor of crime, and crime begets fear, so eliminating black poverty would reduce anti-black bigotry.

Ironically, one way to reduce fear is to follow the lead of the cult leaders and induce another fear, a more acceptable fear.

During crises, people have been known to come together for mutual protection. Wars, for instance, tend to unite citizens of a nation under the banner of patriotism. The entire nation becomes the “we,” with the enemy becoming the “they.”

Ultimately, there may be no better way to eliminate hatred than to recognize it for what it is: An admission of weakness.

Expressions of hatred are admissions of fear and weakness.

Teach that until it becomes common knowledge, and hatred may become less socially acceptable.

And maybe, just maybe, our democracy can avoid falling under the thumb of a brutal (and cowardly) dictator.