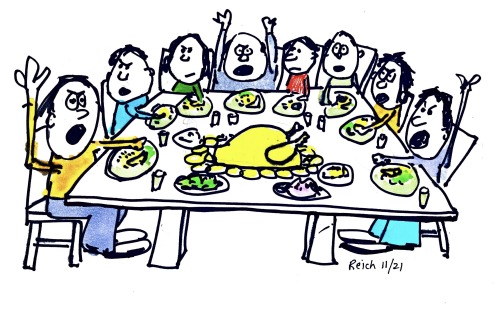 Friends,If your family and friends are anything like mine, there will be a lot of talk today over turkey. Some of it will be gossip. Some of it, about sports or jokes or jobs or plans.

But some of your guests (perhaps even you) will want to talk about the distressing state of the nation and the world.Your cousin Sue worries about climate change and how little was accomplished in Glasgow. Your Trumpish uncle Bob can’t keep his mouth shut about Biden’s failures in Afghanistan and at the border. Your son Jared, back from college, wants to talk about systemic racism. Your friend Sid can’t stop worrying about the pandemic, or assault weapons, or hate crimes, or near-record inequality, or the opioid epidemic, or soaring homelessness, or voter suppression. Your daughter Sarah chimes in about the continuing menace of Donald Trump and lawmakers too timid to stand up to him.

All reasons for concern (except for those of your Trumpish uncle Bob), but I’d hope someone at your table also notes that America has gone through worse times, and have in some ways emerged better.

When I graduated college in 1968, I thought America would never recover. Martin Luther King Jr. had been assassinated, as had Robert F. Kennedy. Our cities were burning. Tens of thousands of young Americans (including several friends) were being ordered to Vietnam to fight an unwinnable and unjust war that ultimately claimed over 58,000 American lives and the lives of over 3 million Vietnamese. The nation was deeply and angrily divided. Young people were tear-gassed at the Democratic National Convention. And then in November of that year, Richard Nixon was elected president.

But we did recover. We enacted the Environmental Protection Act. Eventually we achieved marriage equality for gays and lesbians. We elected a Black man president of the United States. We passed the Affordable Care Act. In 2018 we elected a record number of women, people of color, and LGBTQ representatives to Congress, including the first Muslim women.​ ​Eighteen states raised their minimum wages. In 2020, Trump was sent packing, and Democrats took over the Senate and the House.

COVID was a horror but Congress created a safety net that prevented millions from falling into deep poverty because of it. More than 70 percent of us are now vaccinated against it. We will soon be investing over $1 trillion repairing our crumbling roads and bridges and creating hundreds of thousands of new jobs. And it seems likely (although hardly a certainty) that American families will get help with childcare and universal pre-K, and more.

What about the future? No one can tell, but there are some reasons for optimism. For one thing, we are on our way toward becoming a nation of startling diversity. ​Most Americans under 18 are now people of color. ​In ten years, most under ​35​ will be. In thirty years, most of us. That diversity will be a huge source of strength — as our growing diversity has strengthened us since our founding.

For another, our young people are determined to make America and the world better. I’ve been teaching for 40 years and I’ve never taught a generation of students as dedicated to public service and as committed to improving the nation and the world, as the generation I’m now teaching.

I should also point out that ​60 percent of today’s college students are women​, an astounding achievement. It portends more women in leadership positions – in science, politics, education, nonprofits, and in corporate suites. This will also be a great boon to America, and the world.

I’m no technophile but I can’t help being impressed by what science and technology are accomplishing, such as the COVID vaccines that have saved countless lives, and solar and wind energy sources that are rapidly replacing carbon fuels. With the right laws and incentives, science and technology could solve many more of the problems that plague the nation and the world.

I don’t want to minimize our current plight. I’m deeply worried about climate change, systemic racism, and growing attacks on our democracy. I’m not going to tell any of my friends or relatives over dinner today that they’re wrong to feel angry or to despair.

But I will remind them of this nation’s resilience, and the many ways the future could be bright. And when we raise our glasses for a toast, I will ask that they never give up fighting for a more just society. Happy Thanksgiving, friends.

This is from Robert Reich’s blog, www.robertreich.org. He is professor of public policy at Berkeley, former U.S. Secretary of Labor, and author of 13 books, the most recent of which is “Aftershock: The Next Economy and America’s Future.”