If you looked just at dividend increases and decreases announced by publicly traded U.S. firms during January 2021, you would think it was a pretty run-of-the-mill month. But something very abnormal appears to have happened in January 2021, where if the reported data is correct, something broke in the U.S. stock market.

Let’s get the seemingly normal out of the way first. Here’s the latest update to the chart tracking the number of public U.S. firms either increasing or decreasing their dividends each month, which covers the period from January 2004 through January 2021. 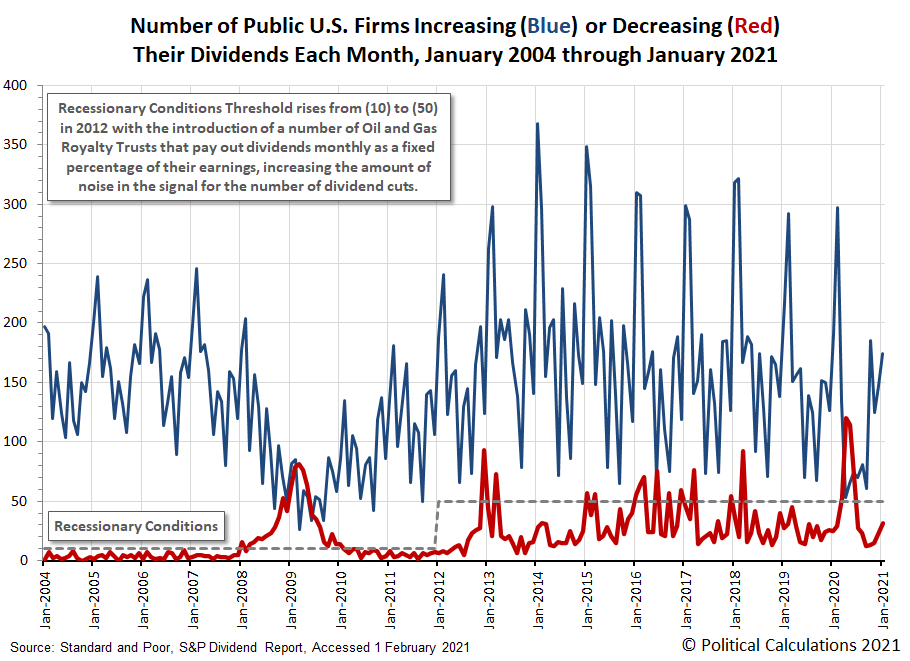 Most investors would take these figures as their topline data for dividend payers in the U.S. stock market, but the dividend metadata shows two categories that were sharply different from every other month in the recorded data series reported by Standard and Poor. Pay close attention to the first two items in the following summary:

We used the word “appears” earlier because it is possible that S&P experienced a reporting glitch for these figures. We’ll provide an update at the bottom of the article here should January 2021′s dividend data be revised.

Focusing now on announced dividend cuts, we found just seven dividend declarations of reduced dividend payments in our near real time news sources. Three are royalty trusts from the oil and gas industry that pay variable dividends, two are REITs, and then there are one bank and one mining firm in January 2021′s list:

Following the link for the company name will take you to our source for the dividend reduction news, while clicking the ticker symbol will take you to the firms’ latest news and stock price.