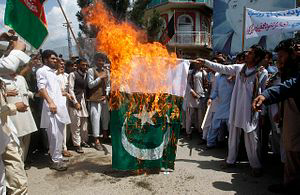 For peace to emerge in South Asia Pakistan must be broken up and scattered to the ends of the earth.

An excerpt from, “Post Afghanistan, US-Pakistan relations stand on the edge of a precipice” By Madiha Afzal, Brookings, October 13, 2021:

“Over the last 20 years, Washington’s needs in Afghanistan defined the U.S.-Pakistan relationship, even if that meant Washington sometimes had to turn a blind eye to Pakistan’s sanctuary for the Taliban. Now, after the withdrawal from Afghanistan, Washington has little incentive to gloss over what it has long seen as Pakistan’s double game or to broaden ties. Washington’s attention is now east of Pakistan: on its relationships with India and other countries to counter China. In this environment, U.S.-Pakistan relations face a reckoning.”

An excerpt from, “Get the Generals Out of Pakistani-U.S. Relations” By Adam Weinstein, Foreign Policy, September 30, 2021:

“Congress’s dubious attitude toward Pakistan was best summarized by Rep. Bill Keating when he recently described it as “one relationship that really always troubled me.” During that same hearing, Rep. Scott Perry struck at the heart of Pakistan’s insecurities when he exclaimed, “we should no longer pay Pakistan [for counterterrorism cooperation], and we should pay India.” Recently introduced legislation calls for an assessment of Pakistan’s past support for the Taliban but falls short of any punitive measures.”

In the aftermath of the Taliban’s takeover in Afghanistan the military and civilian leaders of Pakistan have treated the country as conquered territory.

They move in and out of Kabul without visas or any sort of diplomatic protocol. And they have no shame while there, lecturing the Taliban about women’s rights.

What’s worse is the West is depending on Pakistan to be a beacon of civilized conduct for the Taliban. Western officials hope that Islamabad can tame the radical excesses of the Taliban regime. But that is never going to happen. They are a package deal.

Afghanistan’s ills will bleed into Pakistan. And Pakistani society does not have the antibody to deal with the Talibanization since it served as the host of the disease for over five decades.

Disengaging from Pakistan and Afghanistan will enable the Taliban disease to spread to the rest of the world body, especially Central Asia.

Leaving Pakistan to rot seems to be Washington’s preferred strategy. But that is no way to treat an open wound. Allowing it to fester will benefit no one.

The situation calls for an amputation.

It is in the interests of the United States, Europe, Russia, India, China and Iran to remove Pakistan from the map and restructure the regions that Islamabad has wrongfully lorded over since the end of WWII.

That may seem extreme, but the circumstances demand it. The coddling of Pakistan has led to the nightmare currently unfolding in Afghanistan.

Pakistan’s deranged military elite won’t dissociate with the Taliban or destroy its nuclear stockpile unless they are forced to by a united global coalition.

The U.S and China can prove they are mature superpowers by cooperating to resolve the Pakistani problem and help free South Asia of this bastardly concoction of a country.

Loading...
"Not by might, nor by power, but by my spirit, saith the Lord of hosts." Zechariah 4:6
BEFORE IT'S NEWS ON TELEGRAM
GET THE TELEGRAM APP - https://telegram.org/ JOIN OUR CHANNEL - https://t.me/BeforeitsNews
Read it..
BEFORE IT'S NEWS
SIGN UP FOR OUR NEWSLETTER
Today's Top Stories
Lin Wood Drops Bombs on Killer Jab! Soros, Gates & 9/11! Trump Is Still POTUS! Durham Lowers the Boom! - James Red Pills America
Trump Card Martial Law Imminent! - All "UFO" Tech Is Ours!!- Planet Earth Liberated to 1776!
Situation Update: They Live Among Us! Alien Footage! Juan O' Savin on Spike Protein Treatments! DoD 11.5 Equals EBS! Global Martial Law! - We The People News
Michael Jaco: What’s the Future for Med Beds, SSP, Crypto, Financial Markets, Coming Freeze, GESARA & More (Must See Video)
Q+ Trump's Triumphant Return! The Military Phase [Shadow Presidency] The Coming Reveal!
Depopulation Agenda – Most Vaccinated Countries are all suffering an extraordinary rise in Excess Deaths
Planet X Eyed by Pentagon as They Prepare for an Unearthly Battle via Israeli News Live
New Cirsten W: Huge Thanksgiving Intel! Blasio's Wife Steals $1 Billion From NYC, Kyle Rittenhouse Being Attacked, Kamala Harris Exposed
Message From Our Real VP - JFK Jr. - Mass Formation & Menticide
We Have Crossed tte Event Horizon of Cognitive Destruction! - Mike Adams Must Video
Loading...
Featured
Mass Casualty Event as SUV Intentionally Drives into Crowd During Christmas Parade in Waukesha, Wisconsin – Person of Interest Identified
Charlie Ward & Simon Parkes: We Can Create With The Mind & Spirt With Steve Lepkowski 5G! - Must Video
Did Mariah Carery Take a Fake Vaccine on Camera?
X22Report: Crimes Against Children Equals Common Denominator! Fantasy Land! Godfather III! - Must Video
Rittenhouse Not Guilty but the Great Reset Still Continues
We See How They Manipulate Us & We're Not Falling for it Anymore! - On The Fringe Must Video
Mass Causality Event in Waukesha WI via Inventor Lee Wheelbarger
New Freedom Force Battalion: Is Trump in Control? Devolution + Rev 7:7 The 4th Beast! 11-21
Q+ Trump's Triumphant Return! The Military Phase [Shadow Presidency] The Coming Reveal!
General Flynn Calls for a Christian Nation Under GOD, Sending the Left and Deep State into Panic and Outrage. For it is a War of Good Against Evil
Loading...
Top Global
Bombshell Roundtable With Dr. David Martin, Dr. Judy Mikovits, Robert Kennedy: This Is Not a Vaccine! Watch to See What They’re Giving You and Your Loved Ones (Video)
Persian Gulf Trump update 11/21/2021..Conflict between Yemen's Iran-backed Houthi rebels, Saudi-led coalition continues to escalate
Syria/Iraq update 11/21/2021..Iraqi FM Rejects Prospects of Joining Abraham Accords
What Happened in Israel The You Are Not Supposed to Know
Syria/Iraq update 11/21/2021..Palestinian killed in occupied East Jerusalem after fatally shooting Israeli settler
The "Plan" -- Overthrow All National Governments (Encore)
Massive Austrian/Netherlands Uprising: Are These the Last Stands To Say NO To Orwellian Vaccine Mandates?
New Clif High: One Point Woo: Nucleation and Bonds - Explorers Guide to SciFi World
Ex-Pfizer Employee Scientist Dr. Mike Yeadon Says Midazolam Was Created as a Depopulation Tool!
Europe Rises to Oppose Draconian COVID Government Policies
Top Alternative
Bannon, Barr and Holder; Why Only One Gets Third-Degree Treatment
New McAllistertv: Hollywood Illuminati Movie Programs! Decoding the Wizard of Oz! Hollywood Mind Control
Scary! These People Are Dangerous! Have a Plan to Deal With Psychosis & the Supply Chain Failure! - Full Spectrum Survival
Nibiru - Dr Sam.. 'Now Nibiru is a problem for us all says Dr. Michio Kaku', comment by Dr Sam, given November 20th, 2021
Trump update 11/21/2021..interview with Mark Levin will be broadcast tonight at 8:00PM ET on Fox News
2 Men Shot, 1 Man on the Run After Attempted Robbery of Asian Uber Driver
Guerrilla Gunfighter- “Do You Even Operate, Bro?”
Scott Adams: Are Things Really That Bad?
Nordstom's Ransacked in California - The Wave Of The Future
Massive Austrian/Netherlands Uprising: Are These the Last Stands To Say NO To Orwellian Vaccine Mandates?