In last week’s edition of the S&P 500 chaos series, we made a point of recognizing the S&P 500′s recent winning streak, which lasted just one more day after we commented on it. Alas, it ran into a wall of unexpected inflation, which snapped the streak to a close. 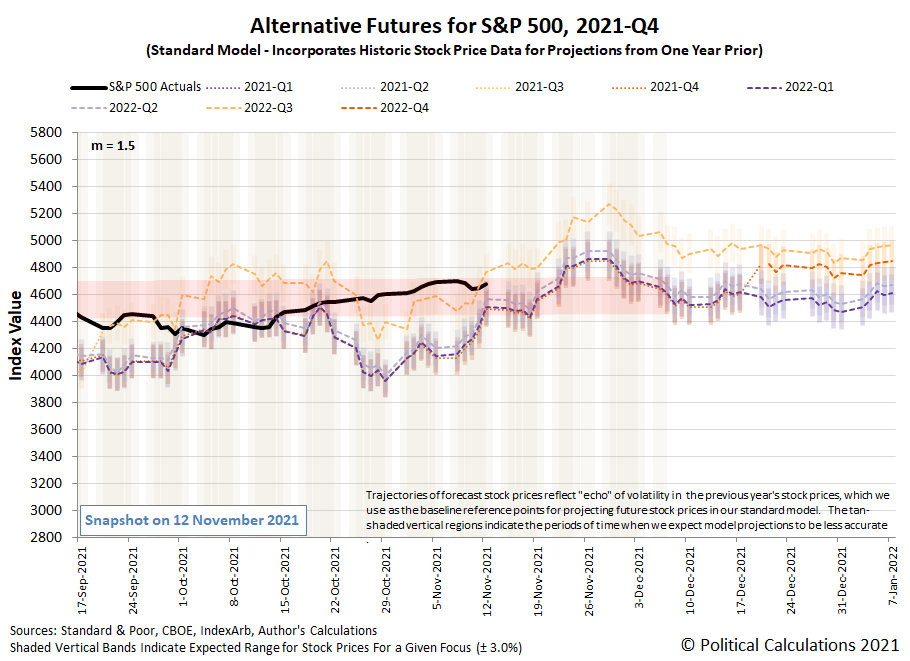 From our perspective, it’s interesting to see the upper end of the redzone forecast range marked the top for the index’ streak, although we recognize that’s a coincidence. We do wonder though what the redzone forecast range would look like if we had anticipated how the outlook for investors would change when President Biden’s proposed tax rate hikes died on Capitol Hill.

Getting back to the streak itself, Schaeffer’s Investment Research’s Rocky White was impressed enough to recount the history of the S&P 500′s previous 8-day or longer winning streaks with record-high closes:

The S&P 500 Index (SPX) just did something it hasn’t done in nearly 25 years. On Monday, it closed at an all-time high for the eighth day in a row. The streak came to an end with yesterday’s down day. The table below shows data on each streak and how the index did going forward.

In the short term, the S&P 500 was down a week later in three of the past four occurrences. So, if we struggle in the short-term, it should not be a surprise. Three months later, however, the index was higher after all seven previous instances. This week I’ll look at how these future returns compare to typical market returns and similar streaks for the Nasdaq Composite (IXIC), which also had eight straight days of all-time highs. 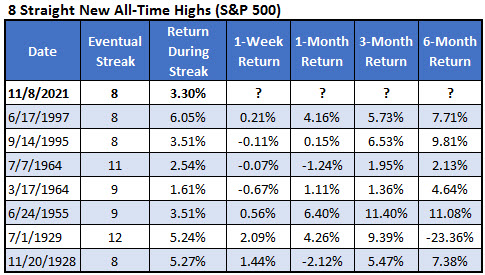 White continues reviewing the historic record to see how investors fared after the S&P 500 or its predecessor indices ran a record-high setting streak:

The table below shows how the S&P 500 performed after each of these streaks ended. There are limited data points, but an end to the streak has not been an indication of buying exhaustion; stocks have tended to do well even after the streaks ended. Perhaps one thing to be wary of is the two signals that occurred within a year just before the Great Depression and then you have two signals within a year in 1964, after which stocks struggled. We haven’t had two streaks of eight recently but earlier this year we had a streak of seven straight all-time highs. Any one signal of all-time high streaks may be nothing to worry about, but if they become more prevalent, perhaps it can signal a major top. 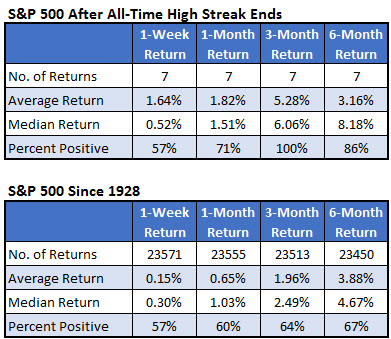 In other words, pretty much anything can happen. What will happen will be paced by the random onset of new information, such as what we saw in the market-moving headlines of the past week:

The CME Group’s FedWatch Tool is now projecting a greater than 50% probability of a quarter point rate hike in June 2022, followed by another in September 2022, and a third in December 2022. That’s a lot of change in just the past week.