The first signs that China’s efforts to address its dire fossil fuel shortage were gaining traction showed up in the Earth’s atmosphere in December 2021.

Beginning in October 2021, China’s government ordered Chinese coal miners to crank up their coal production. At the same time, the Chinese government ordered the country’s coal traders to buy up as much of the world’s available coal supply as they could from wherever they could buy it as China headed into winter.

That increase in coal mined and imported started in October 2021 was directed to China’s coal-starved power generation plants and burned to produce electricity. The carbon dioxide emissions resulting from the Chinese government’s emergency program to keep the country’s lights on by burning more coal have diffused into the Earth’s atmosphere in the months. That additional CO₂ has started to become visible by interrupting and potentially reversing what had been a downward trend in the pace at which carbon dioxide is accumulating in the world’s air. That change can be seen in the latest update to our chart tracking these monthly changes since 1960. 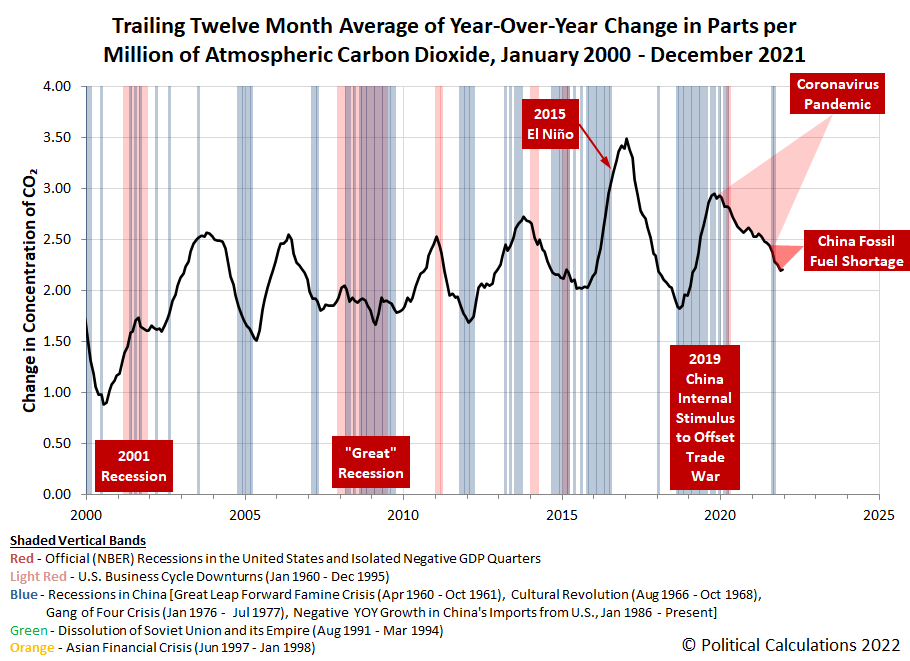 Overall, roughly 60% of China’s economy is powered by electricity produced in the country’s growing number of coal-fired power plants. Looking ahead, China is not quite yet out of the woods because Indonesia, the source of over 60% of the country’s imported coal, announced it would ban exports of coal to address its own potential fossil fuel shortage, caused in part by the Chinese government’s response to its energy crunch. In China, the negative impact from Indonesia’s expot ban is being offset by Chinese miners producing record quantities of coal from their mines.

Here is our series quantifying the negative impact of the coronavirus pandemic on the Earth’s economy, presented in reverse chronological order.