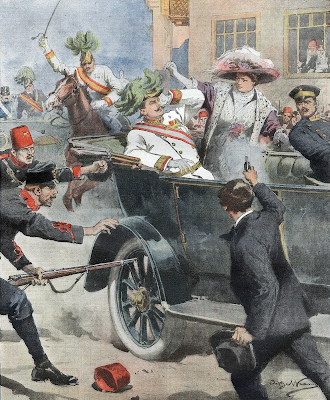 “World War One was the most colossal, murderous, mismanaged butchery that has ever taken place on earth.” – Ernest Hemingway. (Source).

Archduke Franz Ferdinand of Austria, heir presumptive to the Austro-Hungarian throne, and his wife, Sophie, Duchess of Hohenberg, were assassinated on 28 June 1914 by Bosnian Serb student Gavrilo Princip, shot at close range while being driven through Sarajevo, the provincial capital of Bosnia-Herzegovina, formally annexed by Austria-Hungary in 1908.

Princip was part of a group of six Bosnian assassins together with Muhamed Mehmedbašić, Vaso Čubrilović, Nedeljko Čabrinović, Cvjetko Popović and Trifko Grabež coordinated by Danilo Ilić; all but one were Bosnian Serbs and members of a student revolutionary group that later became known as Young Bosnia. The political objective of the assassination was to free Bosnia and Herzegovina of Austria-Hungarian rule and establish a common South Slav (“Yugoslav”) state. The assassination precipitated the July Crisis which led to Austria-Hungary declaring war on Serbia and the start of World War I.

AN EYEWITNESS ACCOUNT OF THE ASSASSINATION OF FRANZ FERDINAND (1914) (Source: alphahistory.com):

As the car quickly reversed, a thin stream of blood spurted from His Highness’s mouth onto my right check. As I was pulling out my handkerchief to wipe the blood away from his mouth, the Duchess cried out to him, “For God’s sake! What has happened to you?” At that, she slid off the seat and lay on the floor of the car, with her face between his knees.

I had no idea that she too was hit and thought she had simply fainted with fright. Then I heard His Imperial Highness say, “Sophie, Sophie, don’t die. Stay alive for the children!” At that, I seized the Archduke by the collar of his uniform, to stop his head dropping forward and asked him if he was in great pain. He answered me quite distinctly, “It is nothing!” His face began to twist somewhat but he went on repeating, six or seven times, ever more faintly as he gradually lost consciousness, “It’s nothing!”

Then came a brief pause followed by a convulsive rattle in his throat, caused by a loss of blood. This ceased on arrival at the governor’s residence. The two unconscious bodies were carried into the building where their death was soon established.

Video Title: The WWI Conspiracy. Source: The Corbett Report. Date Published: November 19, 2018. An excerpt from the transcript of the documentary:

Yes, even the official history books—the books written and published by the “winners”—record that the First World War started as the result of a conspiracy. After all, it was—as all freshman history students are taught—the conspiracy to assassinate the Archduke Franz Ferdinand that led to the outbreak of war.
That story, the official story of the origins of World War I, is familiar enough by now: In 1914, Europe was an interlocking clockwork of alliances and military mobilization plans that, once set in motion, ticked inevitably toward all out warfare. The assassination of the Archduke was merely the excuse to set that clockwork in motion, and the resulting “July crisis” of diplomatic and military escalations led with perfect predictability to continental and, eventually, global war. In this carefully sanitized version of history, World War I starts in Sarajevo on June 28, 1914.