Watch where capital is flowing. That’s pretty much all you need to know to predict the future.

The word “China” evokes strong emotions, so let’s set it aside in favor of a simple syllogism:

1. Certain things matter in all economies.

Four things matter to all economies:

1. The flow of capital and talent in or out of an economy.

2. The productivity of that capital and talent.

3. The availability and cost of energy.

4. The stability of the primary foundation of the majority’s wealth.

Capital and talent fleeing an economy generates stagnation and collapse. Capital and talent are democratic in the most basic form: both vote with their feet. Dictators can strut around ordering everyone to wear their underwear on the outside of their clothing, but if people can vote with their feet, he soon finds he’s talking to himself and a handful of clueless cronies.

The cliche is that capital goes where it’s well-treated. What does that actually mean? It turns out capital and talent both want what the average citizen / participant in the economy wants: stability and predictability. Every participant wants the rules to be visible and predictable, so they can make decisions about where to invest their capital and talent with some confidence that the rules won’t change tomorrow.

Capital and talent invested in unproductive bridges to nowhere and speculative bubbles generate a brief explosion of illusory wealth. The workers and enterprises building the bridges to nowhere spend their earnings, boosting consumption, and the incoming tide of capital chasing speculative gains boosts the value of the assets being chased.

But bridges to nowhere and speculative frenzies don’t actually boost the productivity of capital or labor; they are mal-investments that bleed the economy dry behind a flimsy facade of phantom wealth, a facade generated by the enormous tide of capital gushing into the economy.

Once the tide recedes as capital votes with its feet, the facade of phantom wealth collapses.

Economies that only function if energy is cheap and abundant unravel when energy becomes scarce and costly.

People want to become wealthier, and they will follow whatever trails are open to them to do so.If the economy is structured to funnel most of the majority’s wealth into one asset class, that economy becomes highly dependent on the stability of that asset class for its financial, social and political stability.

If, for example, the people’s wealth is channeled into real estate to the degree that owning empty flats is considered a form of secure savings as well as a stake in an investment bubble that will never pop, then that economy is extremely vulnerable to the resulting speculative excess collapsing under its own weight.

When an asset class owned solely by the super-wealthy collapses under its own weight–for example, fine art–the damage to the economy is limited. But when an asset class that is the primary foundation of the majority’s wealth collapses, that is extremely consequential because too much of the economy’s capital has been sunk in an unproductive speculative bubble.

As strategist Edward Luttwak observed, the funny thing about force is how limited it is in actual efficacy.Forcing capital and talent to stay put doesn’t make people productive. It simply forces a choice: find a way to flee or just give up and stop working hard. After all, what’s the point?

In other words, watch where capital is flowing. That’s pretty much all you need to know to predict the future. 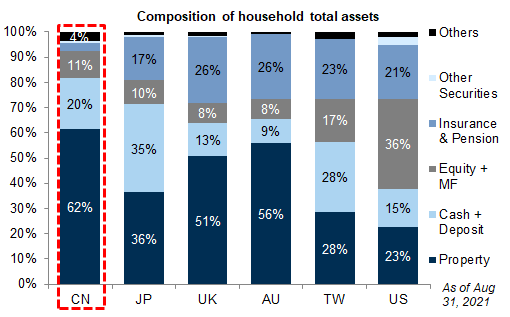 My new book is now available at a 10% discount this month:When You Can’t Go On: Burnout, Reckoning and Renewal.

The Adventures of the Consulting Philosopher: The Disappearance of Drake$1.29 Kindle, $8.95 print); read the first chapters for free (PDF)