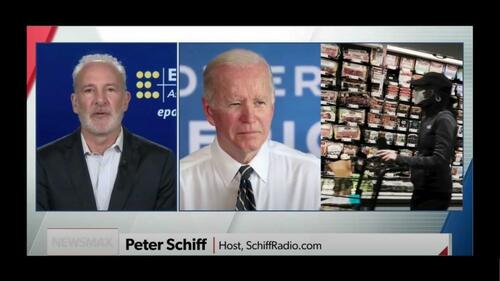 The CPI for July came in slightly cooler than June’s sizzling 9.1%. But even at 8.5%, CPI remains near 40-year highs. But Biden focused on the unchanged month-on-month CPI to declare victory over inflation and claimed he’s building “an economy that works for everyone.”

Host Rita Cosby kicked off the interview by asking Rep. King his views on funding for 87,000 IRS agents in the “Inflation Reduction Act.” King said the spending in the bill will be bad enough and that it will cause “long-term consequences,” but the beefed-up IRS will cause even more damage. He warned the agency will be weaponized to go after political opponents.

Peter Schiff went a step further and said he doesn’t even think the US should have an income tax.

I think the government should fund itself with excise taxes. I don’t think subjecting Americans to these types of audits is the type of country that the founding fathers envisioned when they created this republic.”

Schiff also said he doesn’t think the IRS will use its new manpower to go after billionaires and millionaires.

They can avoid taxes legally. It’s the middle class, it’s small business owners, it’s people who are self-employed — that’s who’s in the IRS crosshairs. And their going to be hit not only with huge tax bills, but interest and penalties that will actually exceed what they owed in taxes.”

CBO analysis of the “Inflation Reduction Act” found that it would collect some $20 billion from people making under $400,000 per year. That breaks a Democrat promise not to raise taxes on people making less than $400K. But Schiff said it’s worse than that.

The inflation tax hits hardest those who earn the least. The fact that Biden is doing a victory dance, I want to throw a flag for taunting.”

Schiff pointed out that while gasoline prices fell last month, driving CPI lower, food prices went up, along with costs in a lot of other categories.

So, it wasn’t a good month. It was another bad month for consumers. It was just masked by a temporary drop in gasoline prices for one month.”

Rep. King wrapped up the interview, saying Biden is “going against reality.” He also pointed out that even though the president can’t control everything in the economy, “the wounds we suffered today are all self-inflicted by Joe Biden.”