We’ve added the U.S. Census Bureau’s annual data to our chart comparing the various available sources for U.S. median household income data that track this demographic characteristic on a monthly basis. The updated chart compares their nominal, noninflation-adjusted estimates over the period they overlap from January 2006 through July 2022. 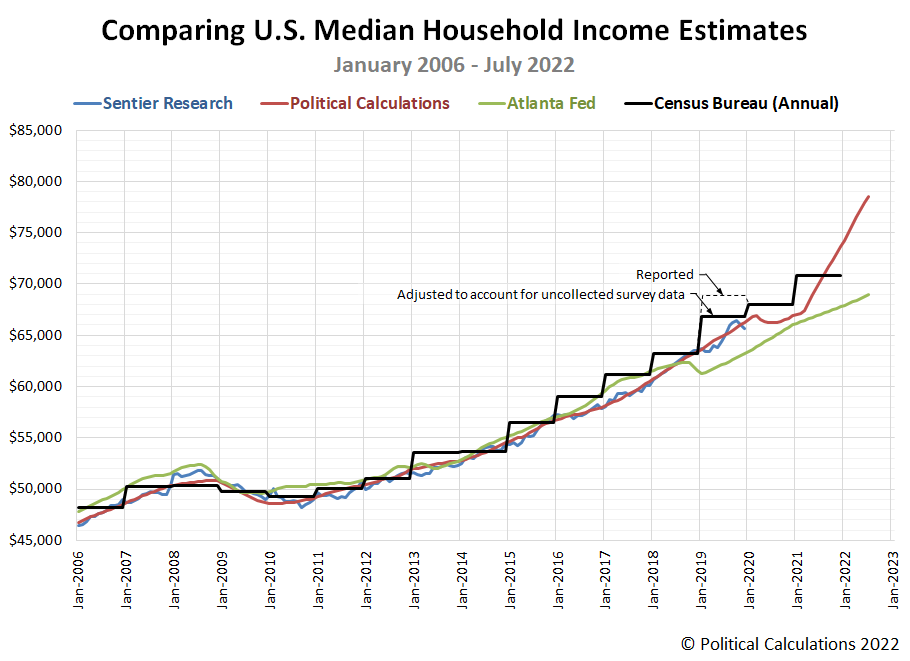 In incorporating the U.S. Census Bureau’s annual data in this chart, we’ve annotated the anomaly for 2019′s median household estimate. Here, the Census Bureau’s median household income estimate for 2019 was greatly impacted by the arrival of the coronavirus pandemic in March 2020, coinciding with the period in which it surveyed U.S. households about the income they earned in 2019. Lockdown measures imposed by several state goverments, including the high population states of California and New York, blocked the Census Bureau from successfully collecting as much data as they intended, particularly from lower-income earning households. In a working paper, Census Bureau analysts confirm the coronavirus pandemic reduced the number of responses to the Annual Social and Economic Survey used to collect household income data, which they believe biased the median household income figure upward by 2.8%. Our chart shows both the Census Bureau’s reported figure of $68,703 and indicates the adjusted figure of $66,779 for that year.

Comparing the Census Bureau’s annual estimates with the monthly estimates, we find that all these estimates range within a few percent of each other from January 2006 through October 2018. After that point, there’s a major divergence between the Atlanta Fed’s estimates and the others, where we continue to note the following three differences:

That difference, particularly with the U.S. Census Bureau’s annual data, is growing much more substantial as time passes.

Political Calculations’ estimates of median household income generally tracks with Sentier Research’s estimates up through the period where they terminate in December 2019. The analysts who founded Sentier Research after retiring from the U.S. Census Bureau went on to permanently retire in 2020. Sentier Research is no longer an operating entity.

For the latest in our coverage of median household income in the United States, follow this link!

The Bureau of Economic Analysis will soon be releasing a major revision of its historic income data. Since Political Calculations uses this data in generating its monthly household income estimates, the chart above represents a snapshot of our estimates compared with other sources “before” the revised data becomes available.