Earlier this year, the interwebs were alive with excitement about an innovation with the potential to solve a problem millions of consumers have experienced. YouTuber Brodie Brazil takes four minutes to discuss the invention of “Tastee Tape” by a team of engineering students at John Hopkins University:

The Inventions in Everything team is so excited for the potential patent for the JHU students’ “Tastee Tape”, we searched to see if they’ve filed a patent application. They haven’t yet, but we did find something almost as remarkable. Thirteen-year-old inventor Adam Philip Schreiner submitted U.S. Patent Application 12/386717 (later published as US 2010/0272864 A1) for an Edible Adhesive Tape on 22 April 2009.

Here are screenshots of the patent application’s cover sheet and the first two figures where you can quickly see the similarity in application between Schreiner’s “Taco Tape” with the JHU students’ “Tastee Tape”: 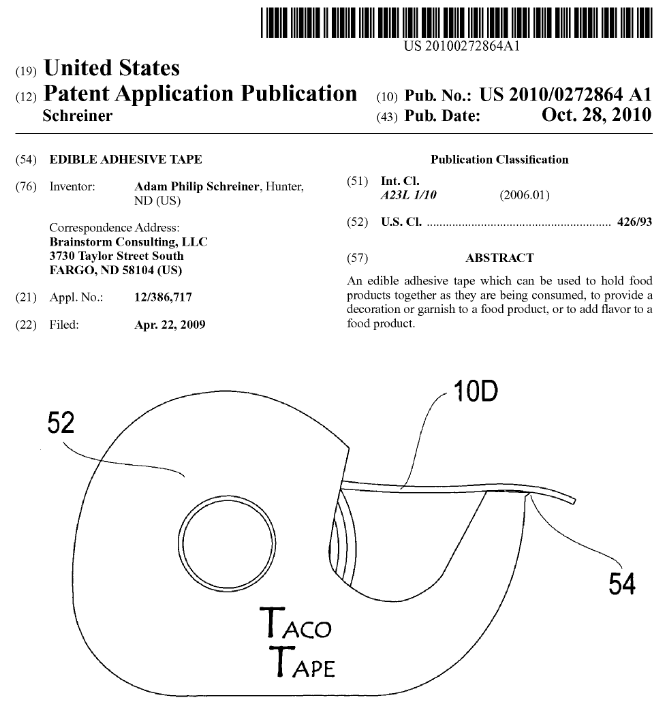 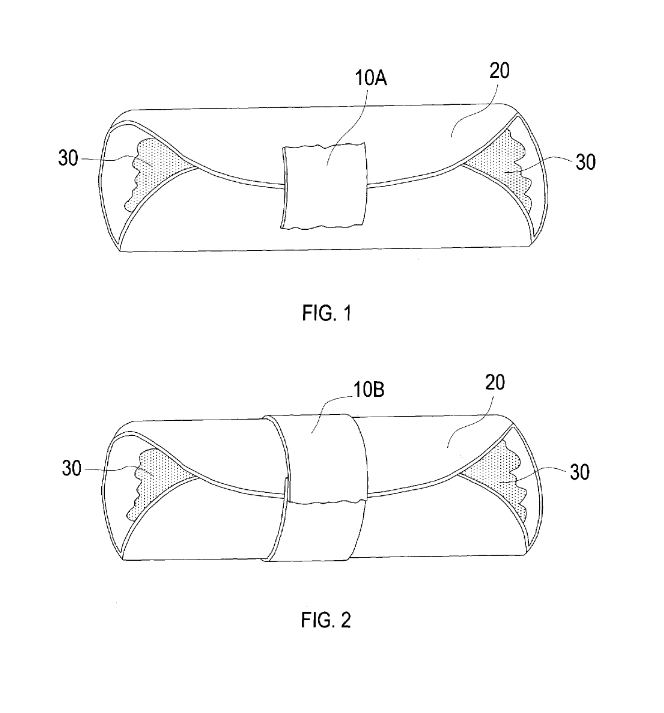 Although the figures illustrate a taco that has been taped, it is easy to see the concept would directly apply to burritos or other similarly wrapped food items. Meanwhile, Shreiner’s invention was reported by the Bismarck Tribune, where we find it had a similar origin to the JHU students’ senior project:

During one messy meal of tacos, 13-year-old Adam Schreiner decided to figure out how to keep the fixin’s in the shell.

A few failed attempts later, Schreiner, with the help of his chef brother and family, created a gelatin, edible concoction to tape the tastiness into the taco: Taco Tape.

Schreiner was this year’s invention winner in the 14 and under age group for a contest held by the Invention Congress at the Marketplace for Entrepreneurs. Schreiner’s taco tape was a hit, scoring him a cash prize and drawing some interested parties to his exhibition table in the exhibit portion of the event.

Schreiner’s application was designated as abandoned in 2012, after the teenager failed to respond to an “office action” from the USPTO.

It may be some time before we know what the fate of the JHU students’ Tastee Tape will be. But the fact that both inventions attracted media interest point to the potential for the invention. Then again, it could mean that like fusion power, the time for taco/burrito tape will always be 20 years in the future.