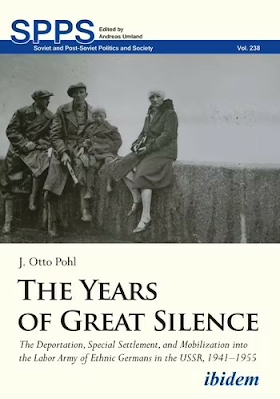 J. Otto Pohl is a freelance writer and historian. He is the author of The Stalinist Penal System: A Statistical History of Soviet Repression and Terror, 1930-1953 (1997), and his articles have appeared in Ararat, Journal of the Hellenic Diaspora, Quadrant (Australia), and Jewish Affairs (South Africa).

This monograph provides a detailed yet concise narrative of the history of the ethnic Germans in the Russian Empire and USSR. It starts with the settlement in the Russian Empire by German colonists in the Volga, Black Sea, and other regions in 1764, tracing their development and Tsarist state policies towards them up until 1917. After the Bolshevik Revolution, Soviet policy towards its ethnic Germans varied. It shifted from a generally favorable policy in the 1920s to a much more oppressive one in the 1930s, i.e. already before the Soviet-German war.
J. Otto Pohl traces the development of Soviet repression of ethnic Germans. In particular, he focuses on the years 1941 to 1955 during which this oppression reached its peak. These years became known as “the Years of Great Silence” (“die Jahre des grossen Schweigens”). In fact, until the era of glasnost (transparency) and perestroika (rebuilding) in the late 1980s, the events that defined these years for the Soviet Germans could not be legally researched, written about, or even publicly spoken about, within the USSR.