The German auto giant’s truck unit, Daimler, which relied on advanced technology for decades, is now all set to rollout a fuel cell that is capable of covering a distance of 600 miles per fueling. The primary reason for this transition can be attributed to the increasing competition that is concerned with reducing carbon and diesel exhaustion by heavy-duty vehicles.

The fuel cell truck will be a suave model from the house of Mercedes – the Mercedes-Benz GenH2, in particular. The truck has been specially designed for long hauls and will be available to the customers in 2023. The manufacturing company unveiled the truck at an event in Berlin and shared with the audience its plans of fulfilling the ends of the Paris Climate Agreement.

The mass production of the fuel truck model will begin in the second half of 2020 itself. Furthermore, the company also introduced the Mercedes-Benz Actros LongHaul which happens to be a battery-powered truck meant for covering shorter ranges up to 300 miles.

Both these models are equipped with Daimler’s new ePowetrain modular platform to reduce their operational costs. The trucks will be first available in Europe but, the company made it clear that customers from Japan and North America will also get their hands on the vehicles around the same time.

According to Martin Daum, the chairman of Daimler, it is the combination of battery vehicles and hydrogen that has helped them to render their customers with the best alternatives corresponding to their needs of application. He added that the fuel-power cells will be more liked by people who are willing to travel long distances with heavy loads while the battery power will be preferred for shorter distances and lower cargo weights. 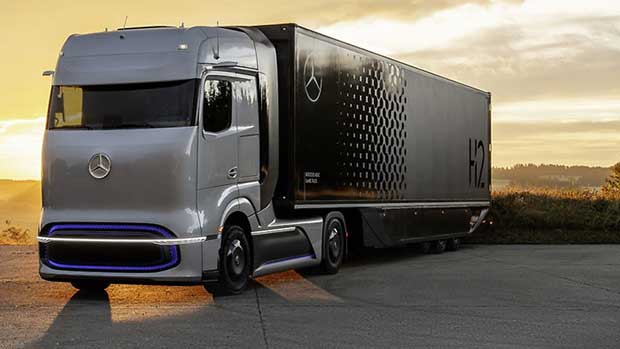 This approach is similar to that of Nikola Corporation which is an upstart company specializing in hydrogen trucks. Owing to its out-of-the-box strategy, Nikola Corp. has already bagged innumerable orders, the most prominent of which is the order for 800 trucks from Anheuser-Busch, followed by industrial partnerships such as CNH Industrial, Bosch, General Motors, and Meritor.

Apart from its environment-friendly attributes, the lightweight feature of the hydrogen powertrains is a reason why it is creating so much buzz lately. Unlike the multi-ton battery packs that require a lot of effort for trucking, the hydrogen fuel cell increase the payload of the trucks and make them suitable to be turned to for traveling the longer routes of 500 miles or even more. Moreover, hydrogen trucks take less time to fuel when compared with the recharging proficiency of diesel-powered trucks.

Another thing worth mentioning is that the Daimler trucks will use liquid hydrogen (instead of compressed hydrogen which is more common). This is because liquid hydrogen is denser and with more energy content. Liquid hydrogen thus ensures more cargo space and higher payload weight and prepares it to cover a longer range at the same time. The only downside is the lack of liquid hydrogen fueling infrastructure at the moment.