Nagoya Institute of Technology researchers have developed a novel membrane that efficiently purifies hydrogen fuel from a mixture of gases.

Hydrogen is a clean source of fuel, but its purification has been challenging until now. Now, a group of scientists has found a solution – by characterizing a hybrid separation membrane for purifying hydrogen from other gases. The scientists are optimistic that their novel membrane will make the use of hydrogen fuel efficient and cost-effective. 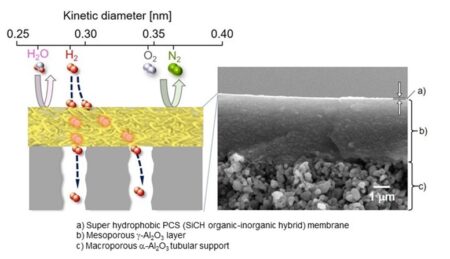 Hydrogen has been hailed as the ‘fuel of the future’. Thus, ongoing research has been focusing on efficient and environment-friendly ways to produce of hydrogen fuel.

Solar hydrogen production through photoelectrochemical (PEC) water-splitting reaction is an attractive “green” method of hydrogen fuel production, owing to its potential for high conversion efficiency, low operating temperatures, and cost-effectiveness. However, efficient separation of hydrogen gas from a mixture of gases (called “syngas”) under different environmental conditions, has proven to be a challenge.

A recent paper published in the journal Separation and Purification Technology seeks to address this challenge.

In this study, a group of researchers from Nagoya Institute of Technology, Japan, led by Professor Yuji Iwamoto, in collaboration with researchers in France, successfully characterized a novel membrane that allows highly selective separation of hydrogen gas generated from the PEC reaction.

Prof. Iwamoto explained further, “By using high-molecular-weight PCSs with a melting point above 200° C, we showed that a superhydrophobic PCS membrane could be deposited on a mesoporous γ-Al2O3-modified macroporous α-Al2O3 tubular support.”

After successfully developing the PCS membrane, the researchers tested it under PEC reaction conditions. As hypothesized, the PCS membrane showed high hydrophobicity. Moreover, under the flow of a simulated highly humid gas mixture at 50° C, the PCS membrane exhibited excellent hydrogen selectivity.

The press release noted that with the development and characterization of this new PCS membrane, it is inevitable that its commercial adoption will not just facilitate the use of hydrogen fuel for energy needs but also curb the use of non-renewable fossil fuels.

If this technology will scale up to industrial use the hydrogen economy just got a huge boost. A simple membrane separating and cleaning up a gas flow will have quite an impact on process engineers plans and the resulting investment needed.

Now we really need is a credible hydrogen storage solution.

The post New Membrane Separates Hydrogen From Other Gases first appeared on New Energy and Fuel.