Blue Sky Uranium has Argentina’s largest uranium resource estimate on its district-scale property and continues to explore for more.

Blue Sky Uranium Corp. (BSK:TSX.V; BKUCF:OTCQB) has trained its sights on uranium and vanadium exploration in southern Argentina and already has the country’s largest NI 42-101 compliant resource estimate for uranium with a significant amount of vanadium. A 2019 preliminary economic assessment (PEA) on the Ivana property, part of the larger, 145-km-long Amarillo Grande Uranium-Vanadium project in Rio Negro province, estimated a resource of 22.7 million pounds of uranium and 11.5 million pounds of vanadium, with lots of areas open for expansion.

“We have a tremendous uranium-vanadium discovery in Argentina; not just a deposit but an entire district that has the potential to rank amongst the largest uranium districts in the world and amongst the lowest operating costs,” Nikolaos Cacos, Blue Sky’s president and CEO, told Streetwise Reports.

Cacos also sees the project’s location as an asset. “I don’t think you can have a better country than in Argentina because of Argentina’s involvement in the nuclear industry for decades now.” Argentina has three nuclear power plants currently operating, with one more under construction, two in planning stages and two more proposed. The country has several particle accelerators and a uranium enrichment plant.

Despite this, Argentina currently does not produce uranium domestically and must import its supply. A law in Argentina guarantees the purchase of uranium by national producers.

Blue Sky is part of the Argentina-focused Grosso Group, led by Joe Grosso, that has had several major discoveries in the country: the Gualcamayo gold project now operated by Mineros SA, the Navidad silver-lead project now owned by Pan American Silver Corp. and the Chinchillas silver-lead-zinc project currently under the aegis of SSR Mining Inc. Grosso serves as chairman of Blue Sky’s board of directors.

“Being part of the Grosso Group gives us a big competitive advantage because Joe Grosso was involved in pioneering mining in Argentina back in 1993 when the country opened up its borders for international investment,” Cacos explained. Blue Sky has been working on the Amarillo Grande project for the last 15 years.

“One of our advisors, Dr. Jorge Berizzo, was the senior exploration geologist and mine manager for Argentina’s Nuclear Energy Commission, and he helped us locate the prospective area where Amarillo Grande is on right now,” Cacos said. “Our VP of exploration, Guillermo Pensado, is one of the few Argentinians who is a uranium specialist; he has over 20 years of experience in the industry.”

Blue Sky is currently drilling 4,500 meters, aiming to expand its mineral resource. “We have a solid understanding of the geological model that leads to deposit,” Cacos said. “We are moving northwards; there are four different targets within the vicinity within 10 and 20 kilometers away from the deposit.”

“This program is a major step in our strategy to identify new uranium resources near Ivana and throughout the district,” Cacos said.

The Ivana deposit is at surface. “It’s within the first 25 meters of the surface,” Cacos explained. “There’s no more than a meter of overburden, so it has a strip ratio of 1 to 1, and the ground is unconsolidated. That means that there is no blasting needed, just scooping it up.” 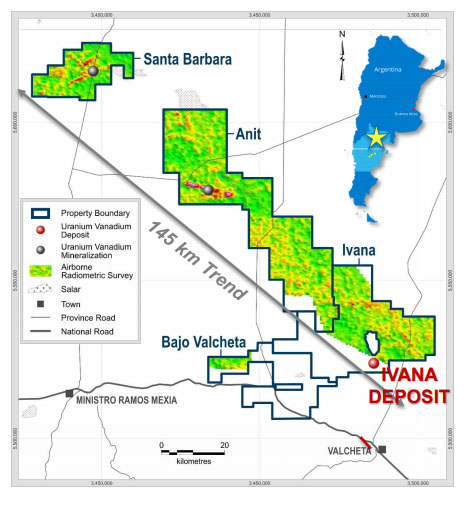 Amarillo Grande is located in Patagonia, in an area that is flat and sparsely populated, but has infrastructure. “There’s a road that runs right through our project; there is water, a rail line and power. In fact, 200 kilometers to the east there’s a uranium enrichment plant,” Cacos said. “The province, Rio Negro, actually owns a state-controlled research company that builds, manufactures and exports small nuclear reactors.”

Cacos explained that the uranium mining will be low cost because of the nature of the deposit. “You scoop up the dirt, put it through a very simple scrubbing and then screening. You can concentrate this to four times the uranium, then 70% of the leftover mass, large rocks and pebbles, are completely not mineralized and can be put back where it was found. We then can leach the concentrate in an environmentally friendly solution and get an exceptional recovery of 85% uranium and 53% vanadium. This would probably be done with a pilot plant that is mobile.”

Blue Sky is exploring in the order outlined on the map below. Area one is the Ivana deposit and the expansion in the immediate areas around it. Areas two and three, Ivana central and north, are being drilled now. The company is waiting to receive drill permits for areas four and five. 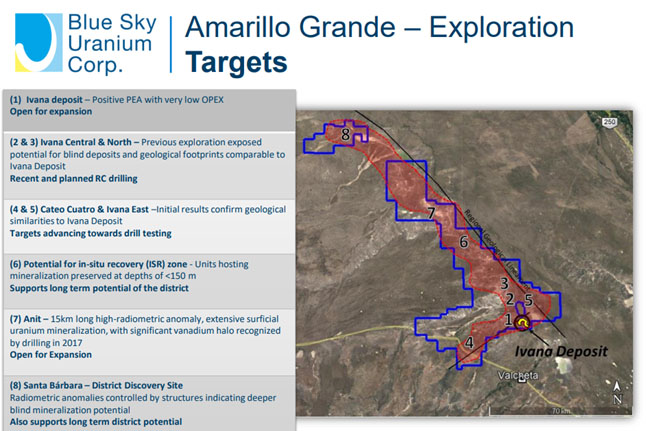 Area six, Cacos explained, is higher elevation. “Because the way the geology works we expect the uranium is deeper there, an in-situ recovery type.”

Further north lies a large area that has had some drilling in the past. “We’ve never done a resource calculation on it. We know that there is a deposit there and eventually we’ll include that in our overall deposit,” Cacos said.

“The PEA demonstrates that this project could be ranked amongst the lowest cost producers in the world. Another goal that we’re doing now is to demonstrate the scalability of the project,” Cacos said. “The fact that with just a little bit of money, we can add a lot of pounds.” 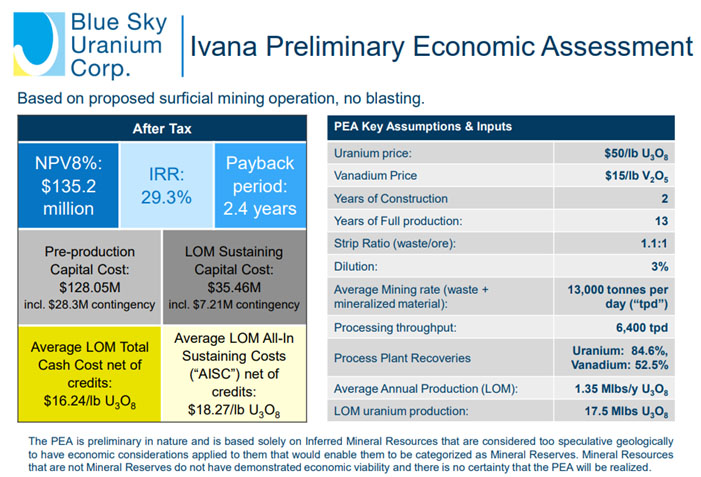 Blue Sky expects to begin to receive drill results from the lab at the end of this month or early next month.

Blue Sky has approximately 162 million shares outstanding, and around 273.5 million fully diluted. About 60–65% are held by management or friends and family. “Our overhead costs are extremely low,” Cacos said, “so about 85% of the money we raise goes directly into our exploration work.”

“The persistent strong outlook for uranium provides a supportive environment for our work, and we look forward to continued success that will build additional value at Amarillo Grande,” Cacos concluded.

Read what other experts are saying about: