Summary: Uranium finally managed to break above the $30/pound mark this year amid news of permanent mine closures, an increase in spot market purchase activity, and a strong outlook for the future of China’s nuclear energy infrastructure. Production is expected to bounce back slightly from 2020, when COVID-19 shutdowns wracked mine operations, but will remain below 2019 levels, continuing the downward trajectory in industry output that began several years ago.

The spot price for U3O8 (triuranium octoxide, the most stable form of uranium oxide found in nature) moved above $30 per pound for the first time this year. As Mining.com reports, two new research notes from BMO Capital Markets and Morgan Stanley say today’s price marks a floor and predict a rally in prices over the next few years to the $48–50 level by 2024.

Those predictions come as several key uranium firms have finally seen success in thinning out a global glut of supply that forced prices below the $20 level in the mid-2010s. While estimating the exact global stockpile is tricky, the Wall Street Journal notes there are some indications that inventory is starting to get depleted. Over the past five years, roughly 815 million pounds of uranium oxide equivalent have been consumed in reactors, while 390 million pounds have been locked up under long-term contracts with the uranium producers, according to UxC’s estimates.

To receive all of MRP’s insights in your inbox Monday–Friday, follow this link for a free 30-day trial. This content was delivered to McAlinden Research Partners clients on April 8.

After years of cutting mining operations, the annual global supply deficit of uranium is projected to average a total of 23 million pounds through 2022, or roughly 13% of global uranium demand, according to Scotia Capital.

As FNArena reports, two more mines closed indefinitely in the first quarter of 2021: Energy Resources of Australia Ltd.’s (ERA:ASX) 3.5-million-pound Ranger mine ended production in January, while Niger’s 2.6-million-pound Cominak mine shut at the end of March. Morgan Stanley analysts forecast total mine supply to increase 10% in 2021, rebounding from a year of COVID-19 shutdowns, but that will still fall –6% short of 2019 levels.

Without a significant price appreciation soon, more mines will likely shut and some project downstream development will slow even further.

As Uranium fund Sachem Cove Partners’ CIO Mike Alkin stated last year, “If prices stay below $50 per pound, idled production won’t come back online and new mines won’t get built—that need to get built—and deficits will be at least 35 million pounds per year” out to 2030.

Per MRP’s March report on uranium, COVID-19 hit the uranium industry hard, forcing the idling of much more capacity than planned—including two separate shutdowns of Cameco Corp.’s (CCO:TSX; CCJ:NYSE) Cigar Lake facility, the largest source of uranium in the world.

Cigar Lake had produced just 2.3 million pounds of uranium oxide in the January-September 2020 period, way below its target for the 2020 year of 5.3 million pounds. The facility’s mining operations have been shut since December.

Worldwide production declined 30% due to the COVID-19 pandemic, notably in Kazakhstan, which produces 40% of the world’s uranium. 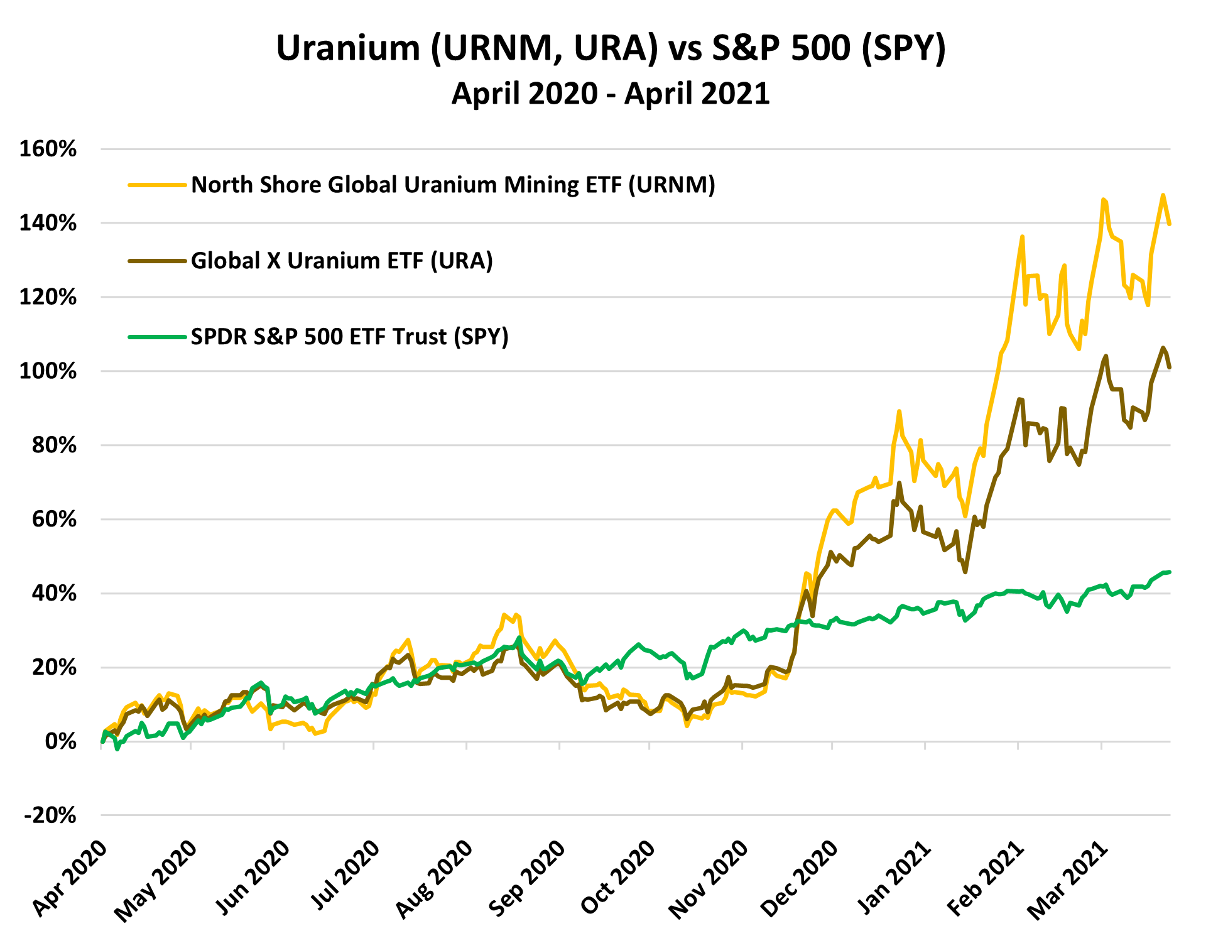 Cameco later poured fuel on the fire when said it will go into the spot market to buy uranium oxide to meet the totals for its sales agreements, adding further upward pressure to prices.

That purchase was a sign of more to come, as market activity has been particularly strong through the first quarter of 2021. Even with uranium prices bouncing back, purchasing product in the spot market remains cheaper than the cost of production. Many firms see this as an opportunity to build up an affordable strategic inventory that will benefit their balance sheets as long-term investments, as well as help to continually dry up the spot market.

Denison Mines Corp. (DML:TSX; DNN:NYSE.MKT) said this month that it has secured 2.5 million pounds of uranium concentrates at $29.61 a pound, at a total cost of US$74 million. The purchase is an obvious bet that uranium prices will rise. As Resource World notes, all of the purchases were made on the uranium spot market, with delivery dates ranging from April 2021 to October 2021.

Per World Nuclear News (WNN), Western Australia’s Boss Resources Ltd. has entered into binding agreements to purchase 1.25 million pounds U3O8 on the spot market, at a weighted average price of $30.15 per pound, and is funding this by a “well-supported” $AU60 million share placement. Boss will acquire the first 0.25 million pounds by the end of April and the remainder by the end of June.

In an especially large transaction, UK-based uranium purchaser Yellow Cake PLC elected March 15 to fully exercise its $100 million uranium purchase option for 2021 with JSC National Atomic Co. Kazatomprom, and agreed to purchase another 440,000 pounds from the Kazakh uranium major. As S&P Global notes, the move may prompt Kazatomprom, the largest uranium producer in the world, to purchase material on the spot market to fulfill outstanding contracts. 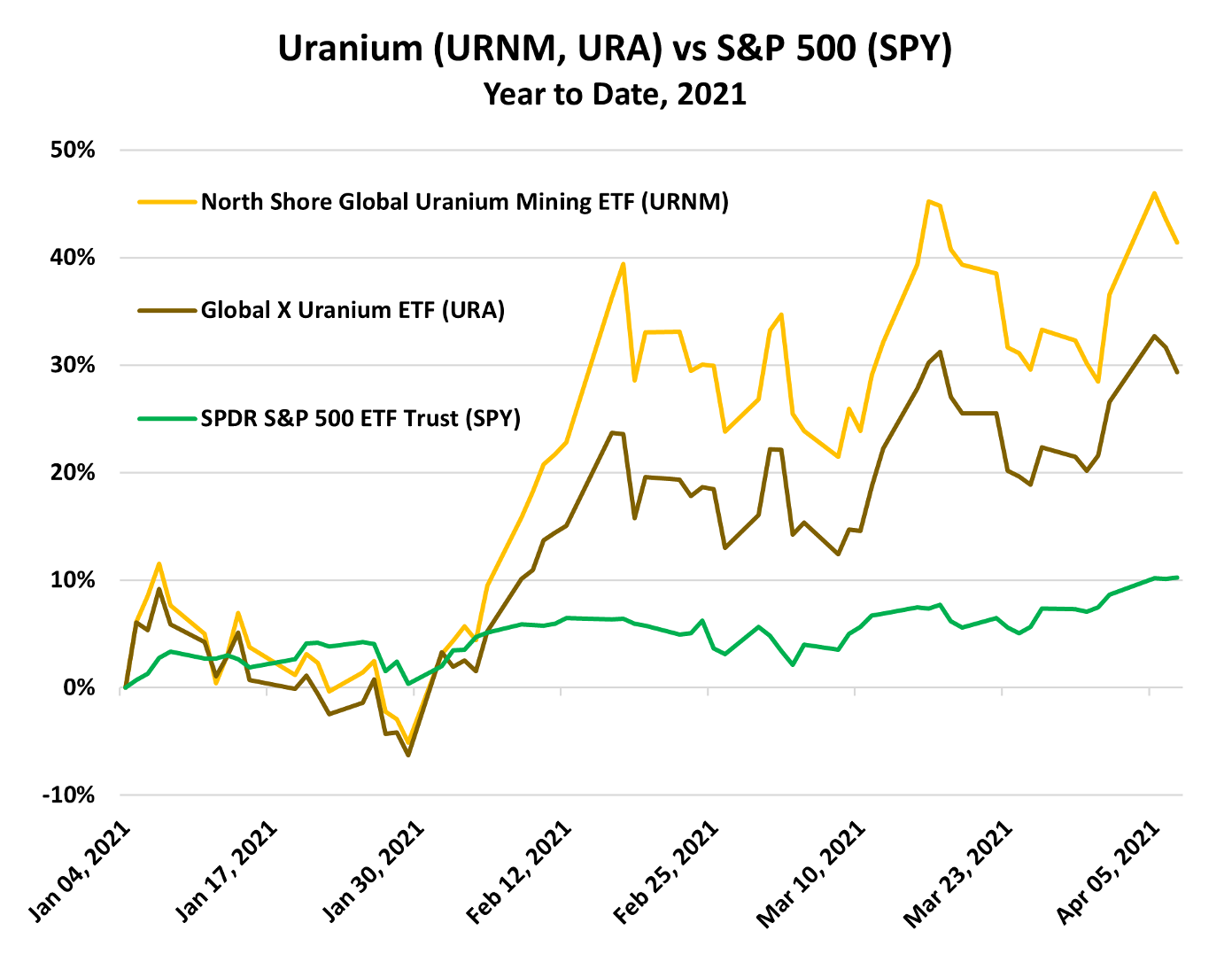 U.S. Stacks up a Stockpile; China Ramps Up Reactors

Freeing up production capacity is a key goal for Uranium Energy Corp., since they are one of the companies that will be supplying the U.S.’s new federal uranium reserve. As MRP previously noted, Congress approved $75 million for an initial year of funding for the reserve, resulting in a 2.5-million-pound purchase of American uranium, according to Investor Intel. That amount is well above annual domestic production, which was only 174,000 pounds of U3O8 (uranium oxide concentrate) in 2019 and declined even further in 2020.

The World Nuclear Association estimates roughly 50 nuclear reactors are being constructed in 16 countries, compared with about 440 operating today. That includes substantial capacity in China, perhaps the most important market for the future of nuclear energy.

Last month, China unveiled its 14th five-year economic plan, which includes plans to increase nuclear power capacity from 48 gigawatts (GW) presently to 70GW by 2025. In late 2020, MRP noted that China aims to become one of the world’s largest nuclear power users, planning to build over 80 new reactors in the next 15 years, and more than 230 by 2050. China currently operates 47 nuclear plants with a total generating capacity of 48.75 gigawatts, the world’s third highest after the United States and France.

In our April 16, 2020, report on uranium, MRP wrote: “An ongoing supply shock is moving the uranium market’s demand/supply balance in favor of miners.” Since the publication of that report, the North Shore Global Uranium Mining ETF (URNM) has returned +140%, more than tripling the S&P 500′s +46% gain over the same period. 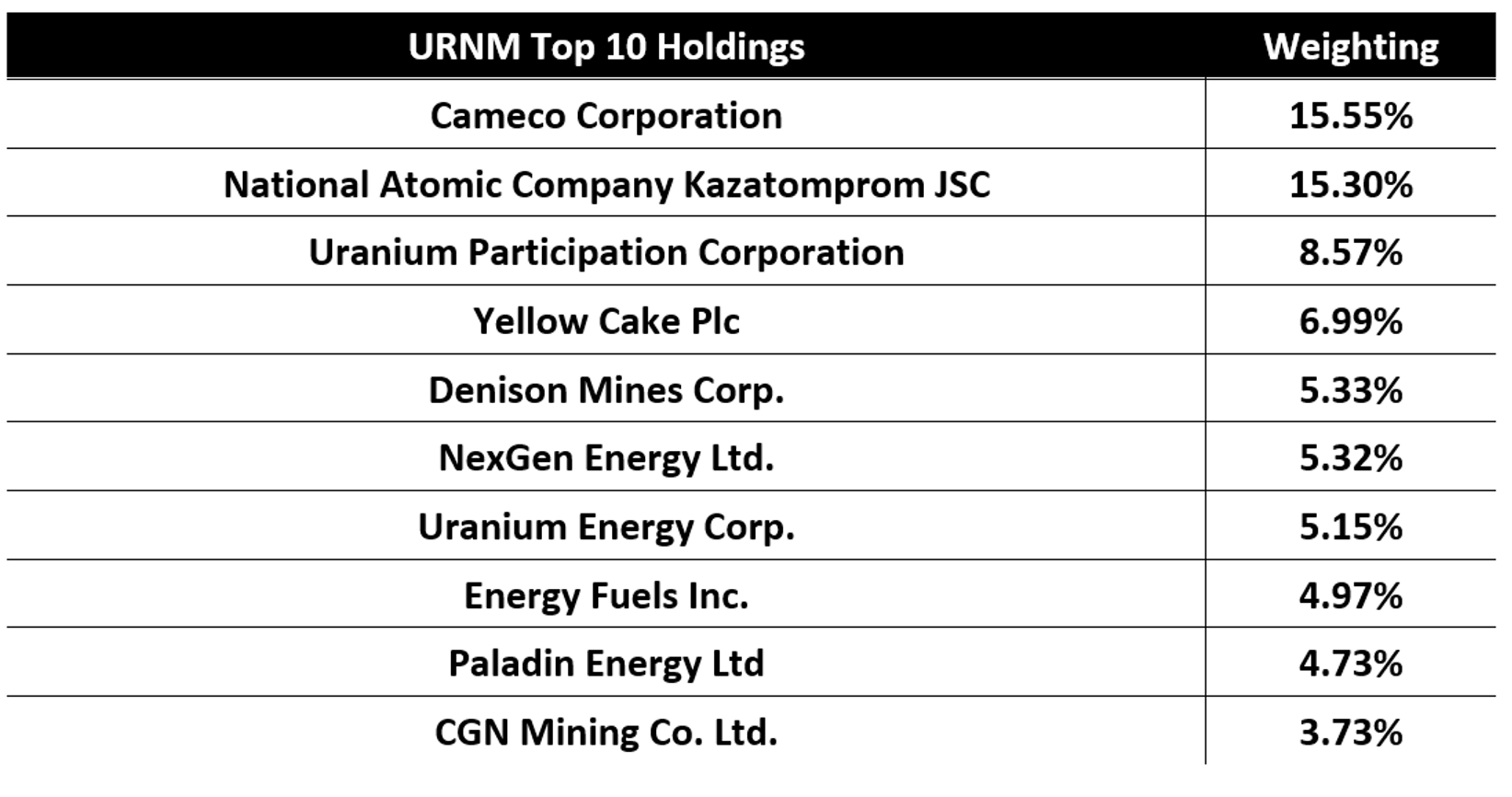 On the back of bullish trends emerging across the industry, MRP will be adding long uranium to our list of themes. We will track this new theme with the North Shore Global Uranium Mining ETF (URNM). URNM launched in December 2019, so it is a relatively new ETF with about $116 million in net assets. It is a pure play on uranium miners, unlike the older and larger Global X Uranium ETF (URA), which combines uranium miners with nuclear component producers.

McAlinden Research Partners (MRP) provides independent investment strategy research to investors worldwide. The firm’s mission is to identify alpha-generating investment themes early in their unfolding and bring them to its clients’ attention. MRP’s research process reflects founder Joe McAlinden’s 50 years of experience on Wall Street. The methodologies he developed as chief investment officer of Morgan Stanley Investment Management, where he oversaw more than $400 billion in assets, provide the foundation for the strategy research MRP now brings to hedge funds, pension funds, sovereign wealth funds and other asset managers around the globe.

McAlinden Research Partners:
This report has been prepared solely for informational purposes and is not an offer to buy/sell/endorse or a solicitation of an offer to buy/sell/endorse Interests or any other security or instrument or to participate in any trading or investment strategy. No representation or warranty (express or implied) is made or can be given with respect to the sequence, accuracy, completeness, or timeliness of the information in this Report. Unless otherwise noted, all information is sourced from public data.
McAlinden Research Partners is a division of Catalpa Capital Advisors, LLC (CCA), a Registered Investment Advisor. References to specific securities, asset classes and financial markets discussed herein are for illustrative purposes only and should not be interpreted as recommendations to purchase or sell such securities. CCA, MRP, employees and direct affiliates of the firm may or may not own any of the securities mentioned in the report at the time of publication.