Jericho Energy just received government funding for a pilot project in a Scottish Distillery, enabling them to switch from fuel oil to sustainable hydrogen energy technology. The Consortium received the government funding. Jericho’s hydrogen boiler (DCC) will be used in the project.

Williamson beamed in from Philadelphia, while Allen Wilson hailed from Scotland, where the COP26 Climate Change Summit was taking place.

At COP26, all countries agree that climate change is an existential threat, but there’s a massive squabble about who should foot the bill to de-couple from fossil fuels.

“Cop 26 is happening here in Scotland now,” confirmed Wilson, “And we anticipate that Jericho will be a benefactor of a major announcement.”

That announcement came right on cue.

On November 24, 2021, Bruichladdich Distillery stated that it will install Jericho’s Dynamic Combustion Chamber (DCC) on site at its distillery on the remote Scottish island of Islay.

The DCC may sound like an obscure piece of industrial hardware, but it’s actually a critical component in the fight against global warming. 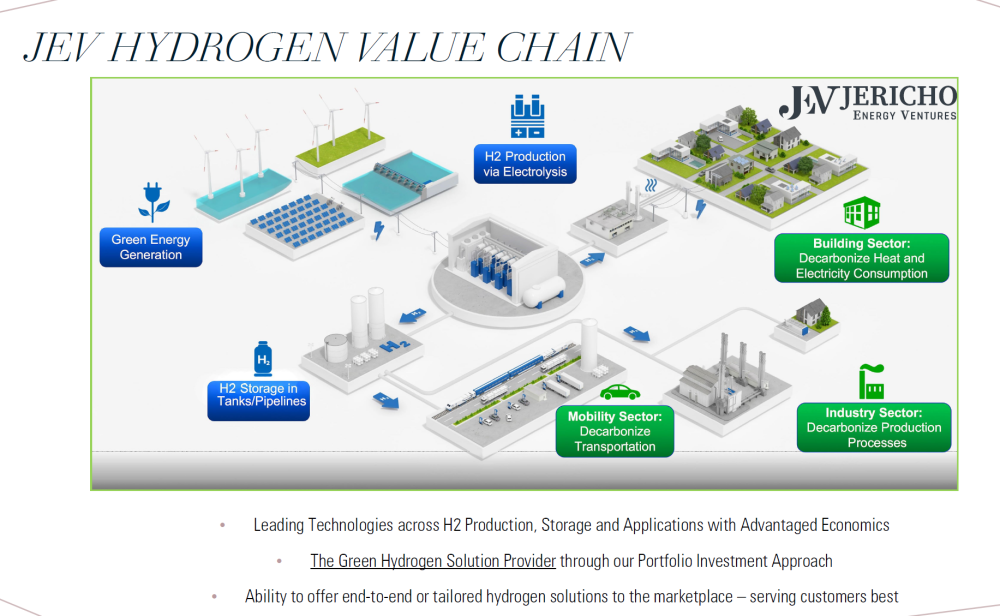 An astonishing 37% of fossil fuels burned for industrial utilization produce steam. Global heating and steam markets account for 15% of all CO2 emissions.

“Many people don’t realize industrial steam is as dirty as it gets,” Jericho CEO Brian Williamson told Streetwise Reports. “Because it sits over the hills and behind the railroad tracks, it’s largely invisible. Approximately 35% of the world’s commercial and industrial  boilers are running on coal.”

“The British government is looking at this as an opportunity to be leaders, from a climate perspective and a technology perspective,” confirmed Williamson. “They are blazing a path forward to push for a cleaner environment. And what better way than to reduce the sizeable carbon footprint of the whisky makers?”

Penny Queen, an investor and stock market social media community builder who focuses mostly on disruptive clean-tech solutions commented that with Jericho’s DCC technology, “no air pollution is created since air is not introduced into the system and it is 30% more efficient that a conventional boiler (97% thermal efficiency).”


I am placing my wager on Jericho for explosive growth in the hydrogen sector. — PennyQueen

The demand is there, the technology is proven, and now Jericho has significant government backing to commercialize its green steam technology.

Why did PennyQueen invest in Jericho Energy Ventures? Read her thoughts and due diligence exclusively available for Streetwise Reports’ Readers. Click here and we will deliver the FREE due diligence Report link to your inbox.

PennyQueen is an investor who focuses mostly on clean tech and does her own independent analysis. She has created a social media community of over 10,000 like-minded investors with whom she has shared her progress of taking a $329k nest egg and building it to over $6 million within a year.

“Steam is critical in the distillation process of whisky,” Williamson told Streetwise. “In fact it’s critical in almost all food and beverage processes.”

“Innovative hydrogen combustion technology will be installed to heat the stills used to create Bruichladdich’s renowned Scotch, as well as their artisanal gin, the Botanist,” stated the press release, “thus removing a major contributor to the brand’s overall carbon emissions.”

“The funding comes from the Green Distilleries Competition run by the Small Business Research Initiative, and follows an initial feasibility study completed in the spring of 2021.”

“Many distilleries across Scotland are making serious steps forward in decarbonizing their energy requirements, and we fully believe that hydrogen has a future in the Scotch industry,” stated Douglas Taylor, CEO of Bruichladdich.

“Our hope is that our proof of concept can extend to commercialization across the island, and beyond, helping us hit the Scotch Whisky Association’s targets of net zero by 2040,” added Taylor.

“For us, this is huge opportunity to show the world that steam can be generated with zero emissions,” stated Williamson, “That food and beverages can be made with green technology. You do not need to use fossil fuels to pasteurize or cure foods.” 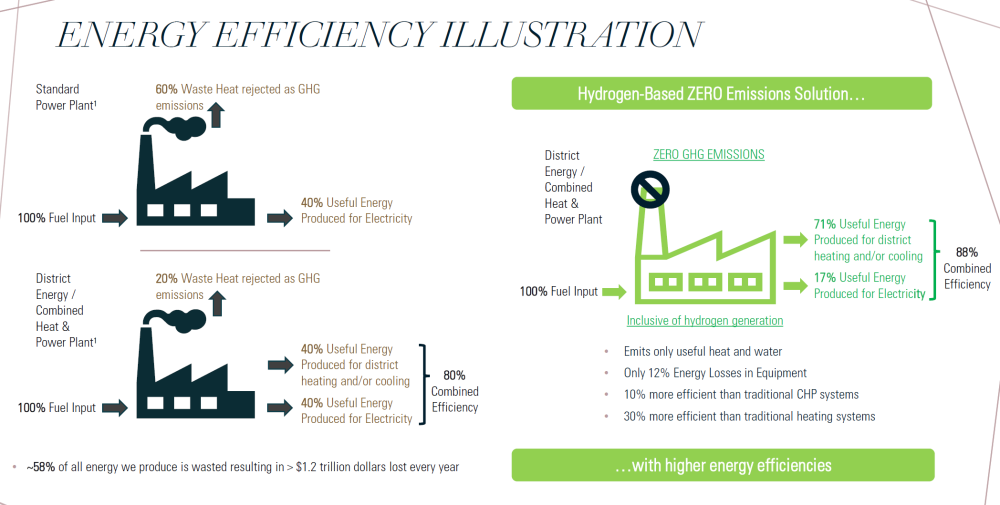 “The recipient of the technology, Remy Martin, pushed the envelope in wanting to be net zero,” confirmed Williamson, “They are buying carbon credits now to reach a zero-carbon footprint, but they have put out a mandate that by 2030, they are going to be physically carbon neutral, not just financially carbon neutral.”

Jericho’s technology offers the first step in each client’s process to decarbonize.

“If you if you follow the whisky and the Scotch business, you know that consumers are focused on the ingredients, the quality, the organic value, the sourcing,” stated Williamson, “There is also a push to utilize green energy. Whisky drinkers want handcrafted, thoughtfully constructed, environmentally conscious products.”

Williamson stresses that Scotland is just the first step. Jericho can replicate its processes “in Washington State, in France, all over the world.” Our next phase of expansion may be in the food and beverage space, because it uses a lot of dirty steam.”

“It is both sophisticated and simple,” replied Williamson. “We take two molecules that like to be together — oxygen and hydrogen —we combine them in the presence of a spark, in a water environment.  It flash-heats to 5,000+ degrees Fahrenheit 2,700 degrees Celsius, turning the water into steam.” 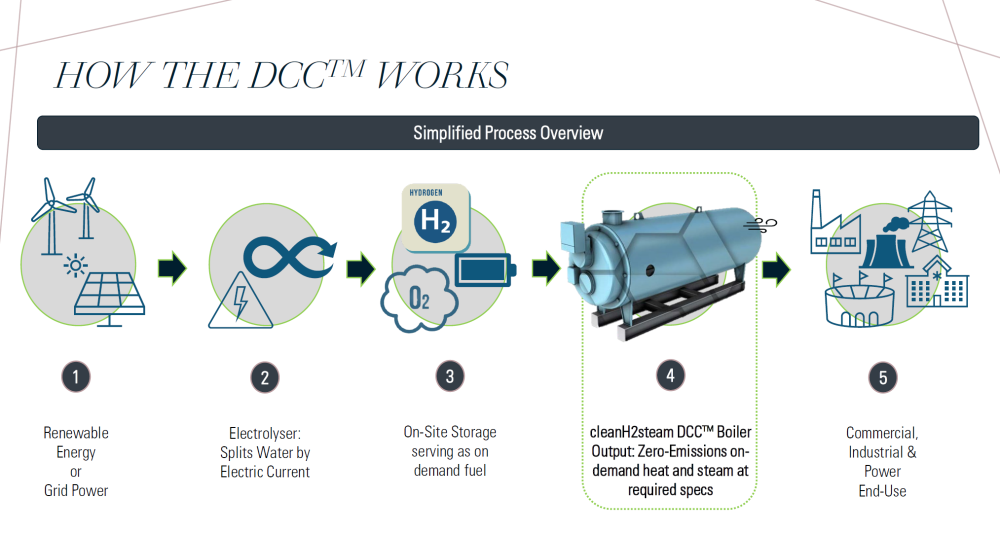 “For 100 years, this process involved fossil fuels, producing waste gas, which is full of pollutants,” continued Williamson. “In our process, there is no waste. There are no emissions. The system runs under a slight vacuum. It’s a complete closed loop system that has no other inputs, except for hydrogen and oxygen and no other outputs except for steam.”

Streetwise confessed to Williamson, that “steam” — clean or dirty — is something we’ve never thought about.

“We didn’t either,” responded Williamson. “Until we saw this opportunity. It’s a $30-billion market. For us to capture five percent of that market would be transformative for Jericho, and for steam-producing companies.”

“We believe we have first mover advantage, and we intend to capitalize on it.  One of the advantages of being a “first mover” is that you get support. Because Rémy is an early adopter, we have the support of the British government. We believe the same thing could happen in Canada, and in the U.S. If you’re an early adopter, it’s like getting a 50-percent-off coupon. The investor community is pushing the corporate world to go green.”

“In the next two years, as we hit our milestones, I see this company at a much higher valuation,” concluded Williamson. “We offer hydrogen generation, applications, storage, and transport.  Jericho is a pure-play investment vehicle to buy the full hydrogen value chain.”

Jericho’s shares trade on the TSX Venture Exchange under the symbol “JEV.” The company has a market cap of $161 million, trading at .72, with 221 million shares outstanding.

If you have not already, be sure to read PennyQueen’s thoughts and due diligence on Jericho Energy Ventures exclusively available for Streetwise Reports’ Readers. Click here and we will deliver the FREE due diligence Report link to your inbox.