Have you ever wondered what happens to the rubber tread that wears off a vehicle’s tires? On a planet with hundreds of millions of vehicles there has to be quite a lot somewhere. New modeling at the University of British Columbia Okanagan (UBCO) campus suggests an increasing amount of what are microplastics, the fragments from tires and roadways, are ending up in lakes and streams.

The UBCO School of Engineering researchers developed a conceptual framework to examine the potential contamination originating from the regular use of vehicles on roads and highways. Their findings suggest that more than 50 metric tons of tire and road wear particles are released into waterways annually in an area like the Okanagan.

The research report has been published in the journal Science of the Total Environment. 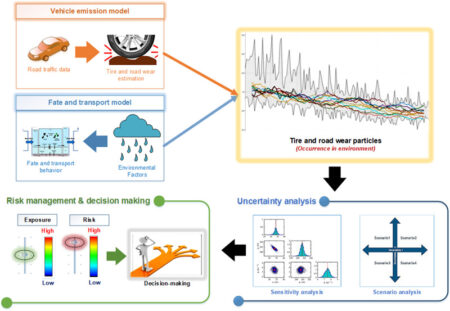 Tires are critical for transportation and about 1.5 billion tires are produced annually to meet global demand – leading to almost six million tonnes of tire and road wear particles being generated around the world.

Both synthetic rubber and vulcanized natural rubber are considered forms of elastomeric polymers contributing to microplastics. It isn’t simply the rubber that causes contamination, said Dr. Mian. “Over time, all of those materials begin to break down and can release chemical additives that affect aquatic species,” he explained.

He pointed out that this is not only a global issue, but a local one. The research was done locally and he says lakes like Okanagan and Kalamalka are being unknowingly contaminated every day as thousands of people drive the highways connecting BC interior communities.

“This analysis focused on a small section of highway in the BC interior, but the findings suggest that other regions across Canada may experience the same challenges with this type of contamination,” said Mian. “A more uniform and comprehensive management and treatment strategy must be developed to limit the possible environmental ramifications.”

As part of his research, Mian also conducted a scenario-based assessment to estimate tire and road wear emissions by considering various real-time factors such as tire and roadway degradation in the environment and seasonal variations.

Tire wear particles aren’t on many folks radar as a threat. Yet the study work does point out that the disintegration of the particles isn’t a nothing to the environment. The idea of eating tire rubber or an elastomeric polymers or simply microplastics isn’t as creepy as ingesting the chemicals that make up the particles.

Likely worse and worthy of more note are the piles of worn out tires. They are more concentrated and pose more localized risks. It not unusual to hear of tire piles catching fire, smoking and dripping out some nasty stuff.

Perhaps civilization will come to recognize the pollution that comes from the comfort of riding on pressurized air in a polymer bladder.

One would expect that some of the tread wear will be vaporized and dispersed widely in the air. Particles might be trapped by vegetation unless washed downstream to lakes and rivers. But the used tire carcass is an issue that is increasing in concern.

So, please. Be good to your tires. And when used up, dispose of them responsibly.

The post What Happens To The Rubber Tread That Wears Off Tires first appeared on New Energy and Fuel.