A University of Wyoming researcher and his colleagues have shown that much of the southwestern United States was once a vast high-elevation plateau, similar to Tibet today.

This work has implications for the distribution of natural resources, such as copper, and provides insight into the formation of mountains during the subduction of tectonic plates.

“We normally think of southern Arizona and the surrounding areas as hot, cactus-laden deserts with relatively low base elevations, below 3,000 feet,” says Jay Chapman, an assistant professor in UW’s Department of Geology and Geophysics. “However, our recent research suggests that, during the Late Cretaceous to Early Paleogene period (80-50 million years ago), the region may have had elevations in excess of 10,000 feet and looked more like the Tibetan plateau north of the Himalayan Mountains or the Altiplano in the Andes Mountains in South America.” 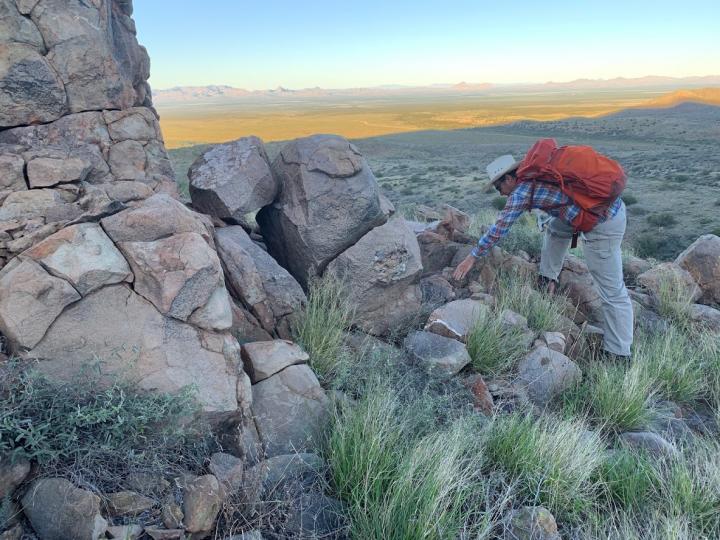 Chapman is lead author of a paper, titled “Geochemical evidence for an orogenic plateau in the southern U.S. and northern Mexican Cordillera during the Laramide Orogeny,” which was published online Nov. 22 in the journal Geology. The print version will be published in February.

Roy Greig, a Ph.D. student in the Department of Geosciences at the University of Arizona, and Gordon Haxel, a U.S. Geological Survey scientist based in Flagstaff, Ariz., are co-authors of the paper. Chapman and his colleagues analyzed the chemistry of igneous rocks to determine how thick Earth’s crust was in the past and then related the thickness to elevation.

“Earth’s crust floats in the mantle just like an iceberg floats in the water, with a little bit sticking out above the surface,” Chapman says. “When the crust is thicker, the height of mountains and the elevation of the land surface are higher, just like the height of an iceberg sticking out of the water is taller if the overall iceberg is larger.”

The study determined that the crust in southern Arizona was once almost 60 kilometers thick, which is twice as thick as it is today — and comparable to how thick the crust is in parts of the Himalayas.

“While the ancient mountains were forming, magma intruded into the crust and formed rocks like granite,” Chapman says. “When the crust was really thick, the magmas experienced extreme pressure from the weight of all the rocks above them, which caused distinctive changes in the types and the chemistry of the minerals that formed those rocks.”

One of the interesting questions the study raises is how the crust in southern Arizona became so thick in the past.

“The most common way to make really thick crust is for tectonic plates to converge or collide, which produces large earthquakes and faults that stack rock masses overtop one another,” he says. “The prevailing view of southern Arizona is that there was never enough faulting in the area to make the thickness of crust we observe. It is a bit of a conundrum as to how such thick crust was generated.”

“Several previous studies have noted a correlation between large copper ore deposits and regions of thick crust,” Chapman says. “For example, there are many copper mines in the Andes Mountains in Chile. The results of this study strengthen that correlation and may aid in exploration efforts.”

UW’s College of Arts and Sciences and the National Science Foundation (NSF) funded the research. Chapman was awarded a $270,000 grant from the NSF in August to continue his work.