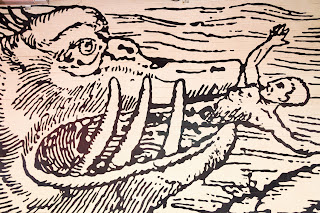 The fabled Emerald city to the north, and the ageing Victorian financial matron to the south.

It’s been about resting control of the coronavirus epidemic that has raged over many months in both capitals.

Some have mainly seen the management failures and not paid close attention to the marvellous successes.

Much of the focus has been on how many cases have been diagnosed every day– the daily case count.

Today, with a further dramatic fall in Melbourne daily cases people, will start to notice the fruits of long intense mitigation efforts.

The graphic below compares daily diagnosed cases including those for both cities which make up the great majority of cases. 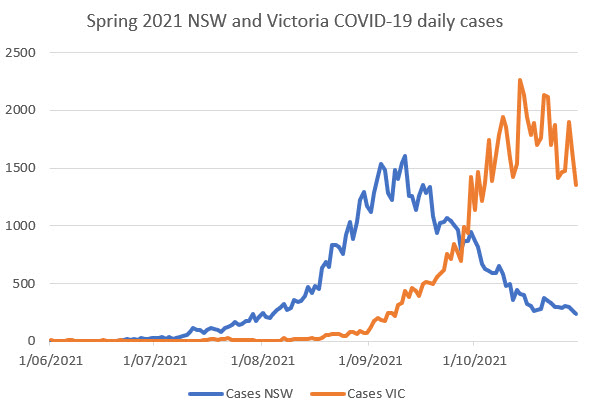 The outbreak started in Sydney in mid-June and peaked early September in that city.

Melbourne’s outbreak started later and peaked mid-October, and it’s obvious that the Melbourne outbreak in Victoria was larger as measured by peak daily counts of diagnosed cases.

But what’s not always mentioned is a remarkable fact that in terms of serious disease the health impact in Melbourne is only about 75% of the Sydney outbreak. This is shown in a graph the compares hospitalisation occupancy in the two regions during this late winter spring season in the southern hemisphere: The low relative hospitalisation in Victoria has been noticed quite widely and was the major reason for early emergence from lockdown emergency containment arrangements in that state.

There has been some discussion of this by social media, for example by data journalist Juliette O’Brien and by several active Twitter data analysts, but there relatively little discussion about a remarkable house achievement in conventional media sources.


The difference between the two Australian states in hospitalisation rates is most likely a combination of different aspects improvements in disease recovery– somewhat lower chances of going to hospital in Victoria coupled with shorter hospital stays. The details of these changes have not been transparently discussed but have been reported briefly in mainstream media.

Epidemic health statistics for Victoria are not as complete as those published by the New South Wales government agencies, but for New South Wales we can see some reduction in rates of hospitalisation per infection based on published statistics (and discussed in previous GMO Pundit posts). Hospital ward occupancy numbers are widely reported and also seem to be the most sensitive way to detect this improved health outcome in Victoria. 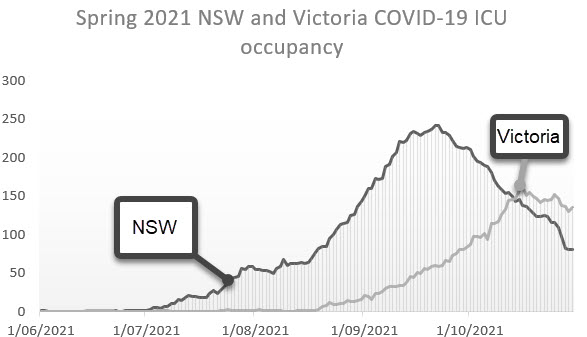 Again we see approximately 75% of the severe health damage (as measured by peak ICU occupancy values) in Victoria as compared to New South Wales.

It’s possible to go further and compare the two regions as far as the detailed timing of this improvement in protection against severe disease.

The following chart compares the timing of the hospital occupancy curve in New South Wales with the daily case count: 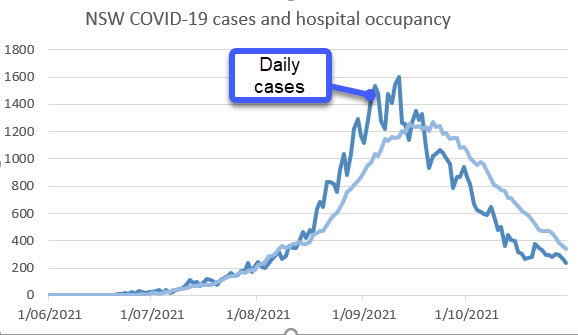 Note that both curves are superimposed until late August but the hospitalisation curve departs from coincidence with the case curve thereafter but the case curve turns downwards before the hospitalisation occupation numbers start declining. This is expected, because there is a delay after the onset of illness of about 5 days before disease become so severe people need to be taken to hospital.

A similar graph for Victoria is distinctly different in timings of events, but is even better in terms of disease improvement features: 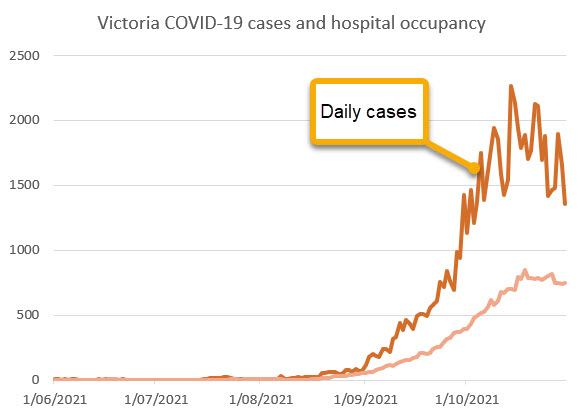 Initially the two curves — daily cases and hospital occupancy — may have coincided but they depart from one another about the same calendar time which is a very early stage in the epidemic compared to the New South Wales epidemic. This has resulted in a much stronger departure between the two curves that occurred with the Sydney epidemic meaning much less health damage , and both curves reached a peak at about the same time.

If we remember there is a lag between onset of illness and onset of hospitalisation of about 5 days, this strongly suggests that the suppression of hospital occupancy in Victoria by vaccine induced immunity is progressing further than in Sydney and is additional to case numbers drops.

How can we explain this? 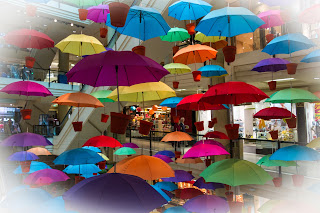 From the Pundit’s point of view it seems sensible to conclude we are seeing progressively more effective protection from severe health damage from the still ongoing rapid rollout of higher vaccine coverage in both states. Both cities will get to about 90 percent or more immunity in the adult population.

Because the Melbourne outbreak occurred later than the New South Wales outbreak, Melbourne got the protective the umbrella of vaccine induced immunity right through the epidemic, rather than one-month in, as seen in Sydney. Severe health damage was thus about 25 percent less in Melbourne.

Sydney may have turned the case number epidemic earlier, but Melbourne turned around severe health damage though the entire outbreak, and is achieving better overall health protection outcomes.