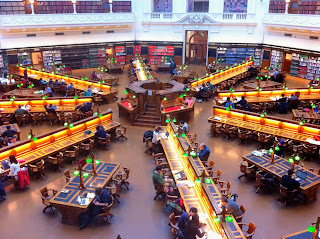 Amidst the intense worry about controlling major Australian Delta variant outbreaks of coronavirus infection in Sydney New South Wales, and Melbourne, Victoria,  there has been little time to trumpet fully the amazing success of the public health operations in Australia.

Several mistakes were made, but in the end, the overall outcome was an amazing success.

The point of talking about this success is that more people need to understand how it was achieved , so that we can hopefully also avoid a final wave of SARS-CoV2 infection, like that currently devastating Europe and North America.

Vaccination played a key role in the Sydney and the Melbourne successes, and it can help avoid one last wave of corona.

Reduction of harm from infection in Sydney and Melbourne is indeed an extraordinary success.

We (the ordinary citizens of Melbourne and Sydney)  have not only bought COVID-19 infection numbers to a manageable level, but have continued to get progressive reductions in serious forms of disease even with currently constant moderate numbers of infections,  because each week fewer infected people are going to hospital and the intensive care unit.

How did we do it?

There are many fascinating questions about how and why this taming of serious disease in the midst of an outbreak was so successful. Undoubtedly, continuing examination of the public health success will yield several important lessons.

The main event was a widely documented, just-in-time delivery of vaccination to large numbers of people in the midst of an outbreak, first in Sydney and then in Melbourne.

Fear of infection drove very rapid high coverage vaccination in both cities occurring while there was active infection taking place with thousands of diagnosed cases. During this vaccine rollout there was widespread effective infection control such as stay-at-home orders, social distancing and use of face-masks. The vast majority of the populace supported these efforts, and a noisy few objected.

The Sydney story: How were different age-groups affected by coronavirus infection, and how did that change during the outbreak?

In this post, the Pundit takes pleasure in making use of excellent statistics on every diagnosed patient made available through the New South Wales data services, to dissect how different ages were affected.

A graph displayed at that New South Wales data service webpage link illustrates a major point: most of the infections were in young people: 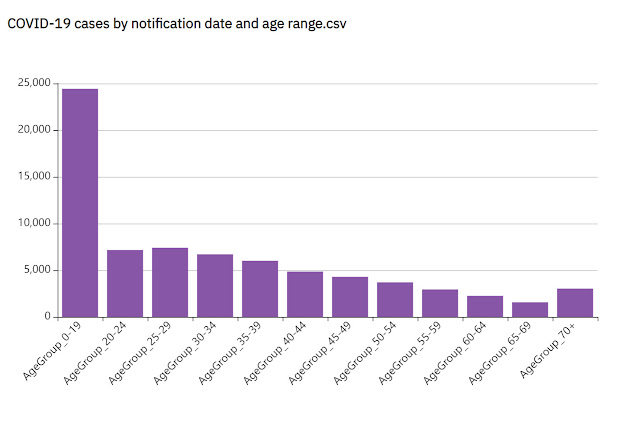 At this webpage there an easy to use option to download  the detailed complete data set used for this graphic.

It was with the most recent 24 November version of this  dataset that the Pundit further dissected how infection proceeded during the many weeks of this outbreak.
This is what he found:

The 74368 patient data records were divided into 7 different approximately equal tranches, each consisting of approximately 10,000 records moving progressively through the time period of the epidemic.

For each 10,000 records, patients were sorted into age categories, and the proportion of each age category in each 10,000 patient batch was then calculated and displayed graphically.

The graph shows how the progression of each particular age group changes over time in  7 different time ordered clusters, one for each age.

There are two major overall patterns that are obvious just by looking at the data.

The proportion of infections in each age group decreases progressively with older age — presumably reflecting the more rapid social interaction of youngest age groups and certainly the strong protection of older age groups by vaccine immunity that was rolled out preferentially to the elderly just prior to the start of this outbreak. This is a widely recognised and expected pattern

As the calendar ticked by from June to November, the young steadily carried more of the burden of infection.

A second pattern can be seen by careful inspection of the graph.

The average age of an infected person starts to get progressively younger,  particularly during the later weeks of the outbreak.

We know that disease severity is less hazardous with younger people.

Details of the changing age pattern of infection as the Sydney outbreak progressed.

Under 20s took an increased in share of infection in the later weeks of the outbreak.

There is only one group in which relative chances of infection progressively increased during the outbreak. These are the under 20-year-olds – teenagers, schoolchildren and infants.

The increase over time in proportion of infections in this age group most likely reflects the fact that they include the only group for which there is no available vaccine available at the moment – the under 12-year-olds.

Infection burden decreased for the 20-somethings.

Quite remarkable, the next elder age group shows a dramatic decrease in relative numbers of infections over time, probably reflecting rapid uptake of vaccine by that age group as it became available during the course of the epidemic. The Pundit will certainly scrutinise  the timing details of that vaccine uptake to see how it fits with these observations as soon as he gets a chance. (These graphic blogpost observations are hot off the press from the Pundits spreadsheets.)

Another interesting pattern is with the older age-groups where several of these groups show a small rise in proportion in the middle of the outbreak with moderation and decreases proportions in the last weeks of the outbreak. This most likely reflects more complete coverage of these older age groups with infection immunity from vaccination during the later part of the outbreak.

A large part of the improved health comes during the Sydney outbreak which occurred from decreased rates of hospital entry came from protection of the elderly from disease, and a shift of infection burden to younger and younger people during several months the outbreak.

The next job for the Pundit is to re-examine the shifts in infection age profiles for the Victorian outbreak  to see if these patterns hold there.

Several other data sleuths have already taken up part of that job, and the Pundit will share updates of their work.