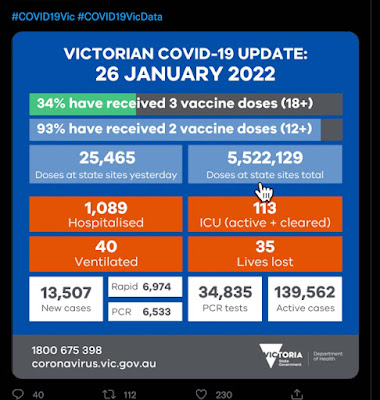 A long lag between death and initial infection can lead us to misinterpret Omicron variant “mildness”.

So far, many infections caused by the Omicron variant have occurred during the latest wave of COVID-19 disease in Australia . Many aspects of these events have suggested that the outbreaks have, relatively speaking, caused moderate amounts of harm.

This pattern of thinking glosses over a lot of pain, and sincere apologies for that.

But there is a need to discuss and analytically interpret what is happening and understand its immediate implications are.

What happened today is that the Victorian state health authorities announced that 35 people sadly lost their lives to COVID-19.

To some, this may seem like just another day of deaths due to the coronavirus epidemic.

But to the Pundit, this is the most shocking news in the latest wave of the epidemic.

It confirms the Pundit’s worst suspicions. That the relatively low mortality rates seen so far with Omicron variant infection are a lull before a storm.

The context is a careful argument shared in a recent blog post by David Glassman, that deaths from the Omicron SARS-2 virus in South Africa lagged unusually long after the onset of disease. By a lag of some 10 to 12 more days than with earlier waves.

Here is a diagram that puts this in context for Melbourne and Victoria. 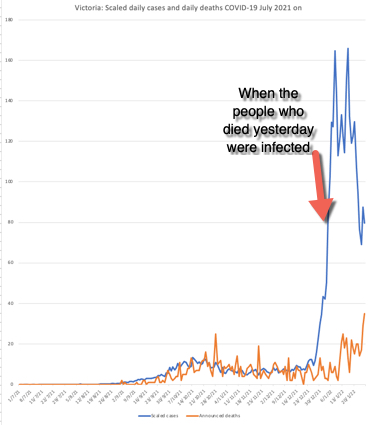 This graph plots daily new infections and daily deaths for the Australia state of Victoria. Daily new infections are scaled so that peaks for deaths and cases in the previous delta wave are the same height. It shows that during the early stages of the December-January Omicron wave deaths are “uncoupled” from case numbers.

The seemingly small rise in deaths might suggest that the death rate with Omicron is much, much lower than with the infections during the Delta variant wave September-October.
But if we think carefully about time needed to die after infection, we realise that current deaths correspond to infections that occurred long before the peak in daily Omicron wave daily infections.
Relatively simple arithmetic from the graph, based on the rule that deaths are proportional to the number of people who get infected, means that peak daily deaths will be ~ 35×150/80= ~65 lives lost a day.
Several hundreds of people will die over the next weeks.
The Pudit find this deeply shocking.
It is based on existing large numbers of known infections and th indication from the graph that daily deaths are continuing to rise, which is exped if deaths lag onset of disease by about 23 days.
Both those assumptions can, and should be checked. Questions about time taken for patients to die should be posed at press conferences and Twitter feeds, for example.