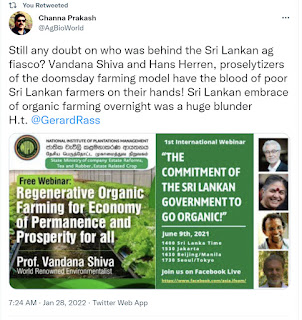 For most folks, “Sri Lanka” is likely to evoke a number of thoughts: tropical paradise with swaying palms and cerulean waters; excellent “Ceylon” tea; incendiary cuisine. Political turmoil will also likely come to mind for news nerds, but the terms “economic collapse” and “organic farming” would not. But recent headlines introduce a new storyline. First: “How Sri Lanka’s overnight flip to total organic farming has led to an economic disaster.” Then: “Sri Lanka declares economic emergency to contain food prices as forex crisis worsens.”

While apocalyptic stories of calamity and crisis from the tropics are not at all unusual, they’re usually linked with typhoons, earthquakes, hurricanes, or military coups. But organic food? This is new.

Digging deeper quickly clarifies: Sri Lankan President Gotabaya Rajapaksa, a military man apparently unburdened by understanding of biology or agriculture, succumbed to the siren call of conspiracy theories from a well-known and persistent myth-monger from neighboring India, Vandana Shiva. Following her advice, Rajapaksa has banned imports of fertilizers and pesticides. His stated aim is to transform the agricultural economy of Sri Lanka into a purely organic enterprise in the expectation that consumers will be willing to pay a premium price for its exports. The realities of substantially reduced yields and limited markets seem not to have entered into his calculations, and actual stakeholders in the agricultural economy are warning of cataclysmic consequences, starting with halving the $1.5 billion export market for Sri Lankan tea.

The real motives for Rajapaksa’s decree seem to be a bit more complicated than simple conversion to the organic religion. It appears he bought into the propaganda peddled by Shiva, though a smidgeon of due diligence would have revealed how thoroughly unhinged from reality her worldview is. But the Sri Lankan economy is one of those battered by the pandemic gales of COVID-19, and it seems his measure was also aimed at mitigating a trade balance problem by conserving hard currency reserves laid waste by the impacts of the pandemic on the tourist industry, the biggest foreign exchange earner and central to the economy… continues at title link to ITIF website… 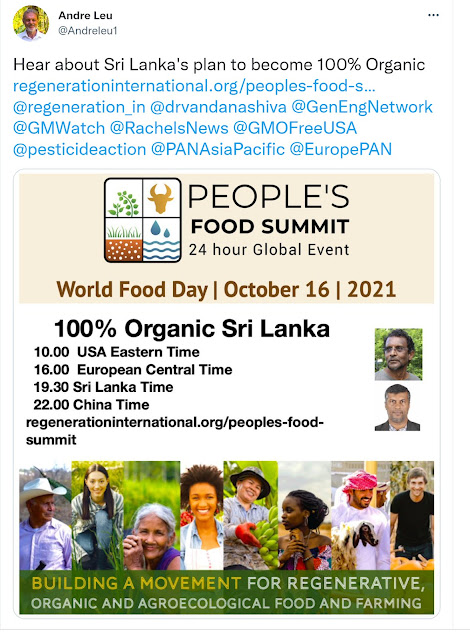 Green Dogma Behind Fall Of Sri LankaOrganic farm advocates said they wanted what’s best for the 22 million people of the island nation off the coast of India. What went wrong? 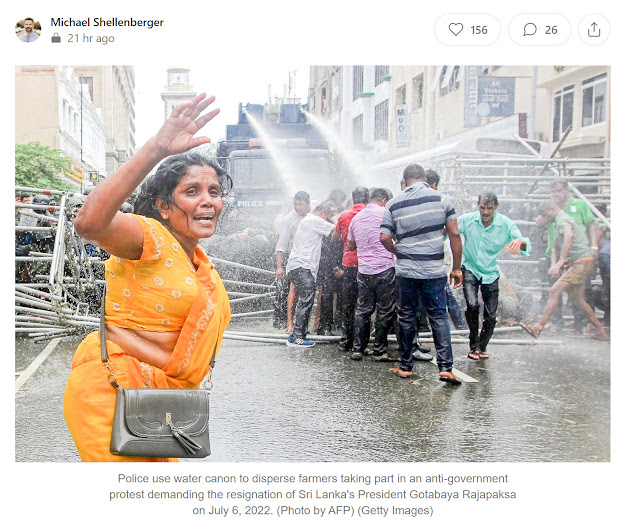 Sri Lanka has fallen. Protesters breached the official residences of Sri Lanka’s Prime Minister and President, who have fled to undisclosed locations out of fear of death. The proximate reason is that the nation is bankrupt, suffering its worst financial crisis in decades. Millions are struggling to purchase food, medicine and fuel. Energy shortages and inflation were major factors behind the crisis. Inflation in June in Sri Lanka was over 50%. Food prices rose by 80%. And a half-million people fell into poverty over the last year.

But the underlying reason for the fall of Sri Lanka is that its leaders fell under the spell of Western green elites peddling organic agriculture and “ESG,” which refers to investments made following supposedly higher Environmental, Social, and Governance criteria. Sri Lanka has a near-perfect ESG score (98) which is higher than Sweden (96) or the United States (51)… 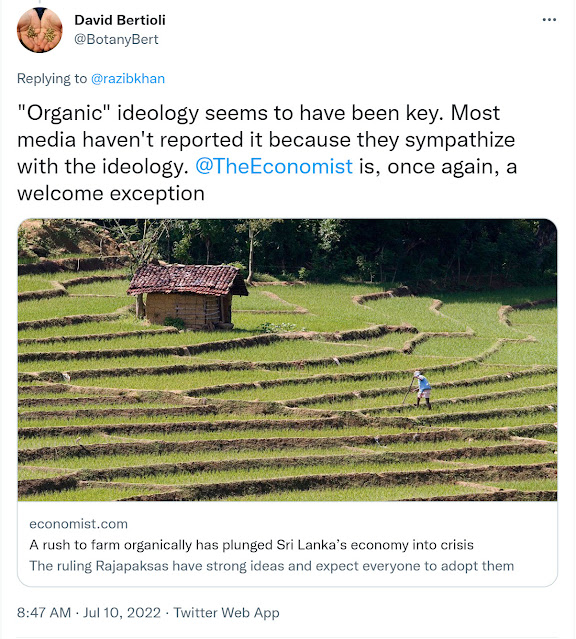 Sri Lanka’s sudden economic collapse has broken its healthcare system. Sonia Sarkar reports on how the country might claw back years of progress, lost in months

On 22 May, a 2 day old infant in Haldummulla, Sri Lanka, started to experience rapidly falling glucose levels. Her parents wanted to rush her to a nearby hospital but didn’t have enough petrol in their vehicle.

The child’s father queued for petrol for hours, as the infant’s condition deteriorated. Finally, he was able to drive her to the local hospital, only to be told to take her to the emergency unit of an advanced hospital in Colombo, 190 km away.

Unfortunately, it was too late by the time they reached the hospital, and the baby didn’t survive.1

“Severe hypoglycaemia contributed to the death, which could have been prevented if petrol was easily available,” says Lakkumar Fernando, president of Sri Lanka’s Association of Medical Specialists. “Even if we consider this death as a statistic, these deaths will eventually be counted to analyse where the country stands in terms of its healthcare indicators.”

On 20 May 2022, Sri Lanka failed to make £63m ($77m, €73m) of foreign debt repayments. The default has made it harder to borrow money and has devalued the country’s currency. Inflation hit 30%, and the government no longer has the cash reserves to import food, fuel, and medicines. The pandemic—and the subsequent collapse of tourism—is one reason, but critics also cite mismanagement, such as a series of tax cuts that have left the government short of funds. Desperate citizens have rioted, and politicians have gone into hiding.

Sri Lanka’s universally accessible healthcare system is also on the verge of collapse. With no foreign cash reserves available for imports, the country has an …